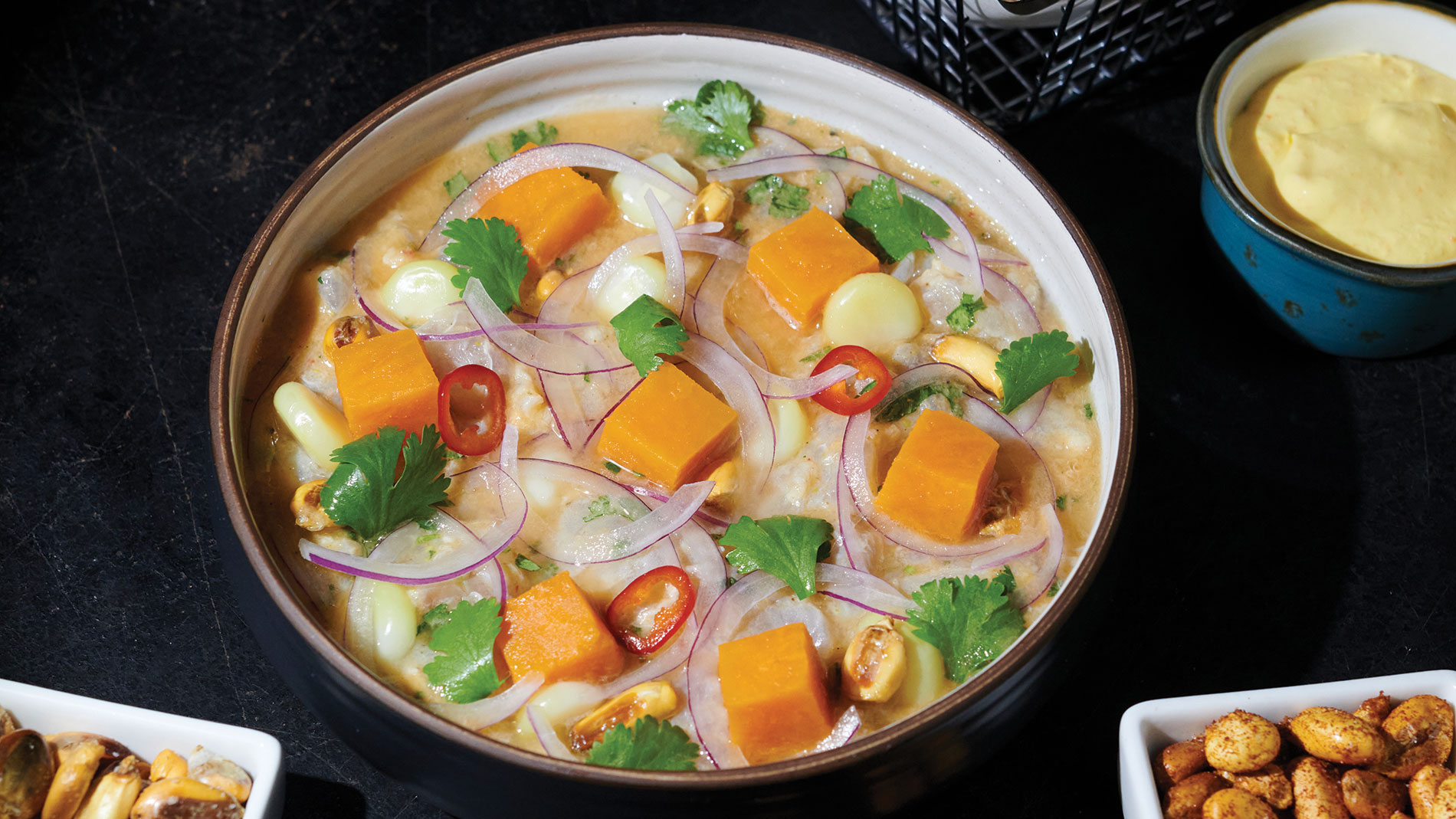 If one aspect of “new” is the thrill of discovery, Jalea is genuinely a revelation. St. Charles’ historic Main Street may be an unlikely setting for a Peruvian bistro, but this is a restaurant worth crossing the Missouri River for. And be sure to bring others along for the journey – even your apathetic “Isn’t it a bit far?” friends will thank you.

We haven’t had a lot of Peruvian restaurants in St. Louis over the years, but in Jalea’s dining room guests will find an approachable, comfortable space to explore a rich cuisine that has been influenced by indigenous cultures, Spanish colonization and immigrants from China and Japan, to name a few. The concise, informative menu is not only a blessing for diners who fear choosing the “wrong” item from page upon page of dishes. It also suggests a focus on quality over quantity, a hunch that is happily confirmed as one winning dish after another emerges from the kitchen.

The yuca fries, fluffy on the inside after a delightfully crunchy exterior, are unmissable. Each one of the handful of entrees, categorized simply as “By Land” or “By Sea,” is a delight in its own way. The seafood is perfectly fresh, whether in the form of the jalea’s crisp, breaded cod, shrimp or calamari, or the citrus-enhanced chunks of ceviche. The latter’s “tiger’s milk” marinade chimes with layers of flavor – clam stock, lime, garlic, ginger, red onion, Peruvian peppers – that surprise in every bite, and there’s added texture from sweet potatoes and Peruvian corn.

Sharing these dishes affords you the fun of bouncing from the zingy ceviche to hearty dishes like the chaufa aeropuerto. Topped with an omurice-style omelet and Nikkei sauce, this short rib, pork belly and shrimp fried rice dish reveals the particular Japanese influence on Peruvian cuisine. Chef and co-owner Andrew Cisneros recently reintroduced the tender, wood-fired rotisserie chicken (pollo a la brasa) he first introduced to St. Louis at the now-closed Original J’s Tex-Mex & Barbecue and later with his Brasas pop-ups, and Jalea is all the better for its revival.

Cisneros’ use of sauces is another area of consistent excellence. The pepper cheese huancaina with yuca fries, the house tartar and aji-citrus mayo, the assortment of sauces served with the pollo a la brasa: Over the course of your meal, these sauces add distinct color and diversity to an already rich experience.

One of Jalea’s most endearing features is the impulse to make every detail count, an aspiration that is again evident on the drink list. Looking for a Peruvian-style lager, Cisneros eventually collaborated with Perennial Artisan Ales to create Waska, a beer brewed with heirloom quinoa. The cocktail selection is built significantly around Peruvian pisco – start with the wonderful pisco sour and go from there.

With Jalea, Cisneros – along with his sister, Samantha (Mimi) Cisneros-Guliyev, and other close family members – has created a restaurant where you quickly learn to look forward to the arrival of the next dish. The restaurant’s achievement is that the payoff is typically not only as delicious as you want it to be, but frequently provides an unexpected flavor or a new insight.

If you haven’t been following Cisneros’ career, it may seem like Jalea has come out of nowhere. In fact, this restaurant represents the arrival of a talent who has worked under some of St. Louis’ most respected chefs and restaurateurs, and who has been a team player in former Sauce Best New Restaurants: Mike Randolph’s Privado and Original J’s, as well as Gerard Craft’s Cinder House. If this is what Cisneros has achieved with his first restaurant, we can’t wait to see what he does next.