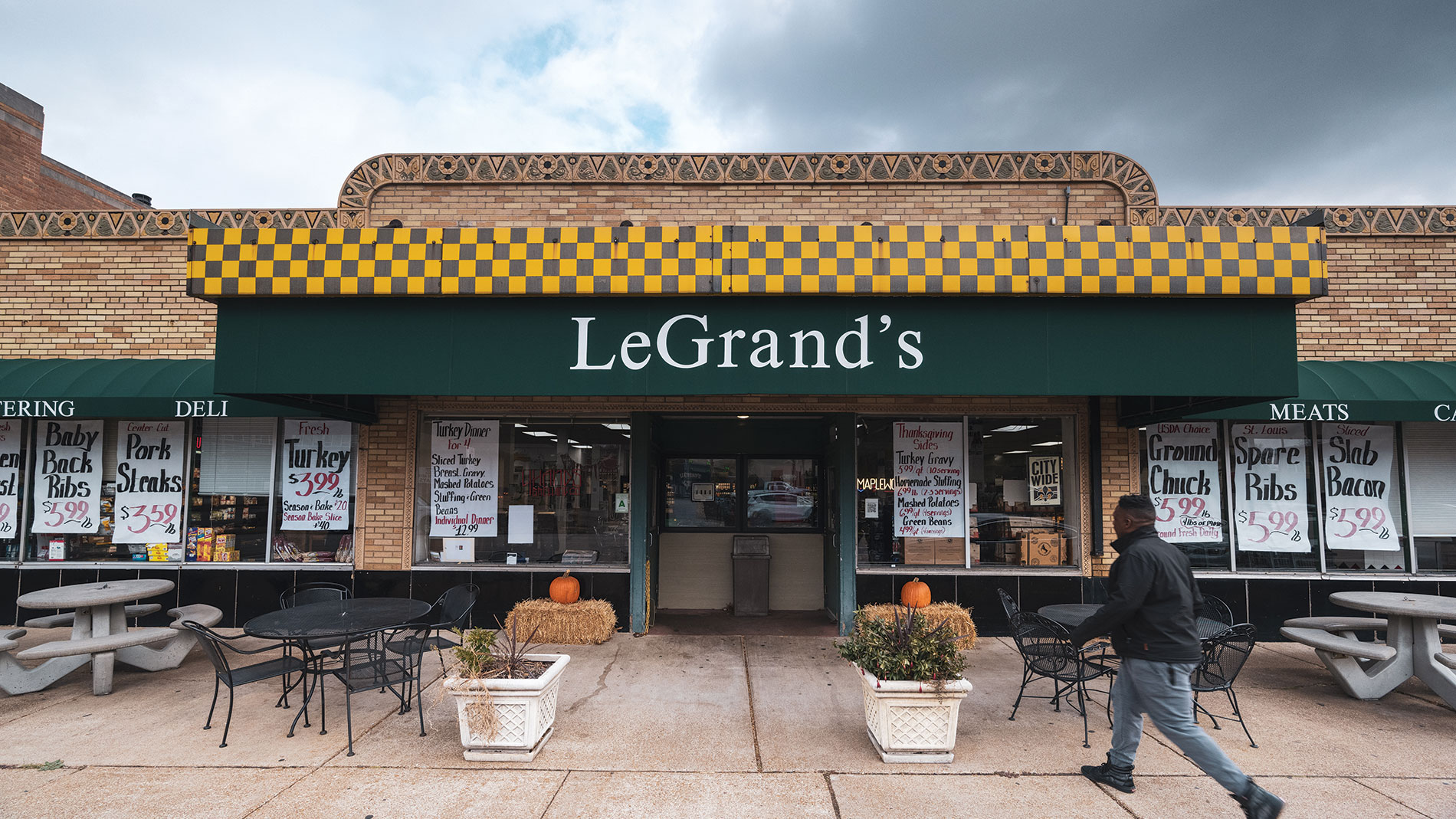 LeGrand’s Market in St. Louis Hills is a local landmark

The story of LeGrand’s Market in St. Louis Hills is really a tale of three different businesses. Although owner Jim LeGrand bought the business in 1987, the customers who line up at his deli counter today are witnesses to an inheritance that dates back almost a century.

In 1977, 16-year-old Jim LeGrand began working at the store that he would one day purchase. In those days it was known as Binder’s Tomboy Market and operated by William Binder Jr. Binder’s father, William Sr., had operated a grocery store in a different location in the city in the 1930s, before relocating to the present-day LeGrand’s location. “All his friends thought he was nuts because where my store is right now was just beginning to be developed, and it was all corn fields,” LeGrand said.

LeGrand’s parents had owned a corner confectionary store near Binder’s, and he was drawn by the atmosphere that Mr. Binder (as LeGrand still refers to him) cultivated. “I really liked the way that his store was neighborhood oriented,” LeGrand said. “He knew the name of every customer that came into the store, he looked forward to seeing them every week, and I really enjoyed that.”

The store’s footprint then was very different from how it looks today. “We had six aisles of groceries, a frozen food section and a large meat department,” LeGrand said. “We didn't offer sandwiches in the deli or things like that. There wasn't a big need for it. People still came in every Saturday morning and filled their grocery cart, because mom was at home making three meals a day still.”

The young LeGrand learned the ropes at Binder’s, becoming a union meat cutter aged 19. In the 1980s, he helped to create the brats that would become a top seller at Binder’s, which are still among LeGrand’s top sellers today. LeGrand explained their creation was a happy accident: Binder’s had purchased a case of ground beef seasoning mix, intended for customers to make homemade salami. It didn’t sell well, leaving Mr. Binder puzzling over what to do with it. “I looked at him, and I said, ‘Well, it just looks like a nice spice package, why don't we try one and see what it tastes like?’” LeGrand said.

They were impressed by the results. “It tasted like a sausage, it was just a little bit different – a little bit of sweetness and some garlic,” LeGrand said. One summer weekend, they sold a larger batch to customers, labeling it bratwurst. Next, they deconstructed the seasoning mix so they could replicate it themselves, and the LeGrand’s bratwurst was born. Today, the market makes around 600 pounds of bratwurst per week, all the work done by hand.

Binder’s was part of the Tomboy network of grocery stores, each featuring Tomboy’s signage but independently owned. LeGrand recalls at one time there were over 100 of the stores within a 50-mile radius of St. Louis, but by the late 1980s the Tomboy brand was in decline.

By that stage, Jim LeGrand had purchased Binder’s with his brother, Joe, who passed away in 2015. They bought the store in 1987, but didn’t change the name until four years later, when they purchased the building. The LeGrand brothers had ideas about how they wanted to change things, but few people saw a future for a neighborhood grocery store like Binder’s. “The bankers actually told me I was a dinosaur, set for extinction,” LeGrand said. “These were people that I knew. They were my friends.” Did he have second thoughts? “I had second thoughts as to how intelligent I thought they were,” he said, deadpan. “I knew I had faith in what I was doing, and I knew I could make it work.”

LeGrand made changes gradually and as the budget allowed, but in the early years he was also wary of alienating longtime customers who still used LeGrand’s as their grocery store. Over the years, the grocery section was pared down to daily essentials, in addition to snacks, beer, wine and more recent additions like LeGrand’s frozen pizzas, which became a pandemic-era hit with customers.

One of the most decisive innovations in LeGrand’s history took place with the introduction of deli sandwiches in 1998. Many of these were created by deli manager Joe Scanlon, and a sporting theme quickly emerged. Cardinals and Blues Hall of Famers, the Billikens, Fredbird and other sporting heroes have sandwiches named after them today. LeGrand’s deli counter also offers a range of freshly prepared salads and sides.

Far from alienating customers, LeGrand’s has changed to reflect the neighborhood’s demands. “When I began working at the store in 1977, the average age in St. Louis Hills was probably 65 to 75 years old,” he said. “That neighborhood was really established in about 1940, so all the homeowners were all older people.” By the turn of the century, a new generation of young families had moved in, and they wanted something different from their local deli and market. “By the time 2007 rolls around, we have … 10-year-old and 12-year-old kids out there eating sandwiches and having fun in the deli area like it's their little social club,” LeGrand said. “Ever since, it's still like that every Friday when all the neighborhood schools get out early.”

Today, Jim LeGrand is just as fond of his customers and his place in the neighborhood as Mr. Binder was in 1977. “I really enjoy all the different people that we get as customers,” he said. “And when I say everybody's nice, man, I mean everybody that comes into the store is happy. I don't know if it's because they're looking forward to having a great lunch, but we have a nice clientele coming into our store every day … It just makes you want to keep making it a better place, because the people really thank you for it.”