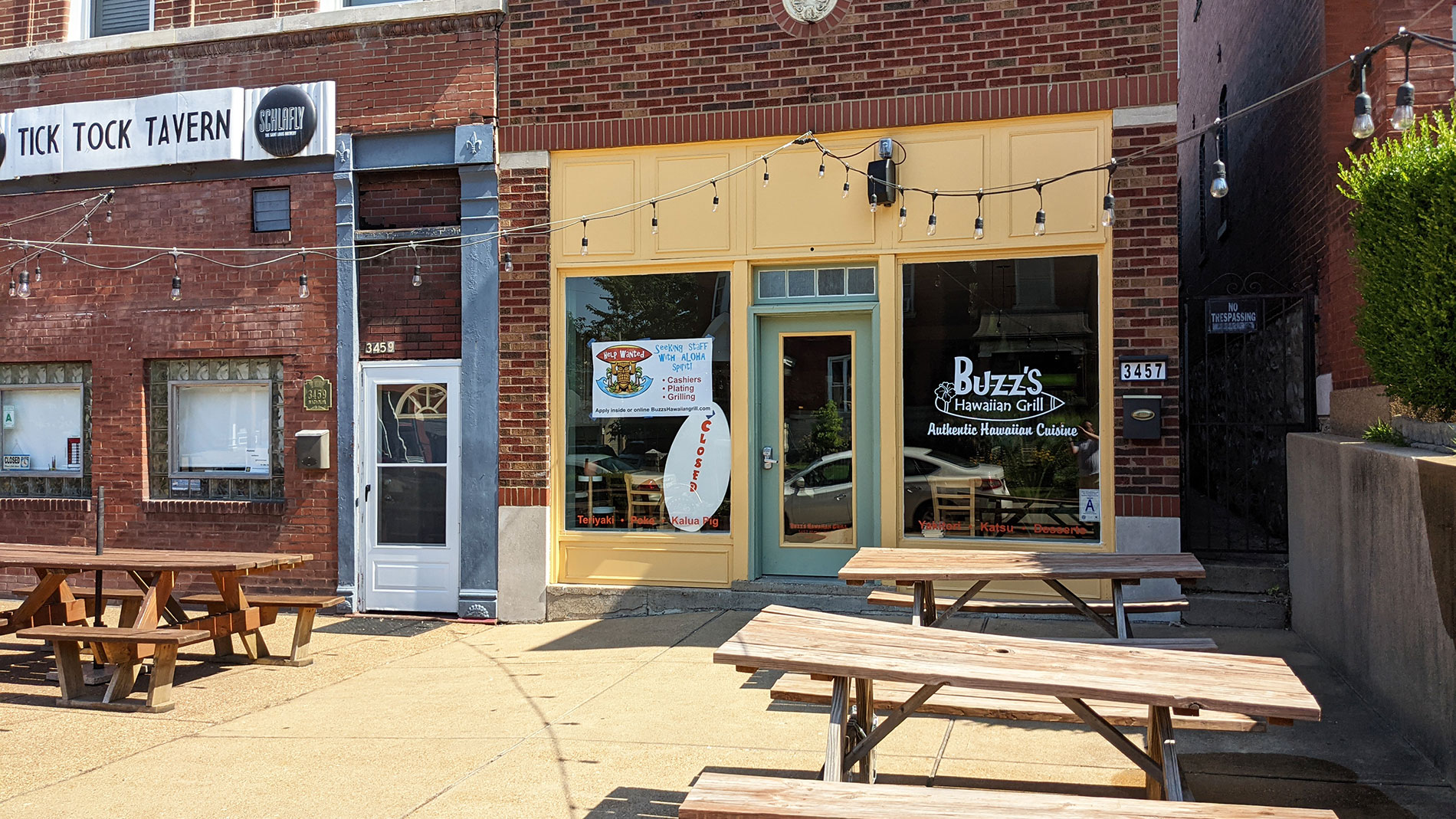 After five years criss-crossing St. Louis as a food truck, Buzz’s Hawaiian Grill now has a brick-and-mortar restaurant it can call home. The Hawaiian restaurant has set up shop in the space adjoining Tick Tock Tavern at 3475 Magnolia Ave. in south St. Louis, most recently used by Steve’s Hot Dogs, which moved to South Grand last year.

Co-owner Thomas “Buzz” Moore said he and his wife and business partner, Leta Moore, had been looking for a space for a few years, but the space leased by Tick Tock Tavern was the first to check all the necessary boxes. The connection with the bar next door was part of the appeal, as was the patio. Importantly, the space allows for convenient loading and unloading of the food truck, which will remain an important part of Buzz’s operations.

Moore said the owners of Tick Tock Tavern also felt Buzz’s would be a net positive for the bar. “They were looking for a unique menu, something that other places don’t offer,” Moore said. “There's a lot of pizza, there's a lot of sandwich shops all over St. Louis. They wanted something more unique to draw a regular crowd and I think they embraced our vision of what a Hawaiian cafe would look like.”

That vision began with reworking the space, removing a dropped ceiling to make the space feel larger, repainting the interior, and hanging some framed artwork on the walls. “It's tastefully done,” Moore said. “It's something that you would find in a Hawaiian home, in a Hawaiian business or in a Hawaiian cafe.” Moore lived and worked in Hawaii for a number of years, and with several children and grandchildren still living there, he makes regular visits. As such, he encourages curiosity and respect for Hawaiian culture and rejects cultural stereotyping. “We're not into being cliched,” Moore said. “We're serious about the Hawaiian culture and food.”

Moore wants Buzz’s Hawaiian Grill to give St. Louisans a taste of the side of Hawaii that tourists often don’t see. “If somebody came to St. Louis and went to a high-end Italian restaurant, they're not getting the Italian food that people in St. Louis enjoy when they go to the Hill,” Moore said. “And the same thing is happening in Hawaii. There's endless local cafes and drive-ins.”

He’s talking partly about a food culture that was shaped by Hawaii’s plantation era, when people from China, Japan, Korea, the Philippines, Mexico and beyond immigrated to work on fruit and sugar plantations. “There was this huge historical melting pot of foods,” Moore said. The lunches those workers were fed gave rise to the plate lunch, a simple format that is both uniquely Hawaiian yet also reflects a rich, diverse range of culinary influences.

Buzz’s plate lunches are built on the traditional Hawaiian formula: a protein, served with two scoops of white rice and a side of mac salad. Options include poke, chicken yakitori, kalbi rib, Kalua pig, garlic shrimp and paniolo chili plates, but there’s much more to choose from. If you’re in the mood for something lighter, there are tacos – poke, Kalua pork, fish – and sandwiches like the teriyaki steak or Kalua pork.

In addition to Buzz’s ever-popular poke bowl, Moore has introduced the new poke bombs, jumping on a trend that only took off in Hawaii over the past few years. Poke bombs are bitesize parcels of inari (sweet beancurd) stuffed with ahi tuna poke, white rice and garnish. “It turns poke, which is normally a chopstick dish, into a finger food,” Moore said. Moore said another Hawaiian trend he plans to add to the menu is fries drizzled with teriyaki sauce.

The pupu (appetizer) menu also includes lumpia (Filipino fried spring rolls), manapua (a steamed bao bun stuffed with Chinese barbecued pork) and musubi (fried spam served with a sweet egg pancake and rice wrapped in dried seaweed). The pupu platter lets you try all of these together, an option Moore said has been a hit with Tick Tock Tavern customers. A number of items, including kimchi and mac salad, are available to grab and go, and customers can also order bulk items such as poke and various meats by the pound. Moore recommends placing bulk orders online for pickup to minimize waiting times, but said that most walk-in bulk orders can be prepared within a 10 to 15 minute window.

Staffing shortages are imposing limits on what’s possible right now, but Moore said Buzz’s is just getting started. Further down the line, he plans to offer huli huli chicken, a barbecue dish you’ll find being sold at roadside stalls in Hawaii on Saturdays. “In Hawaii, if I'm driving to work on a Saturday, I'm looking for somewhere along the horizon on the highway, I'm going to see smoke billowing from a gas station parking lot and I know that's a huli stand, I'm going to pull in and get a huli chicken dish for lunch,” Moore said.

Breakfast is the other target. Moore has a menu ready to go that will include Portuguese sausage with rice and egg, banana pancakes and Hawaiian fried rice with egg. “Hawaiian breakfasts are amazing,” Moore said.

Buzz’s Hawaiian Grill is open from 4 to 9 p.m. Thursday to Saturday, 3 to 8 p.m. on Sunday and 4 to 9 p.m. on Monday. The restaurant is closed on Tuesday and Wednesday.