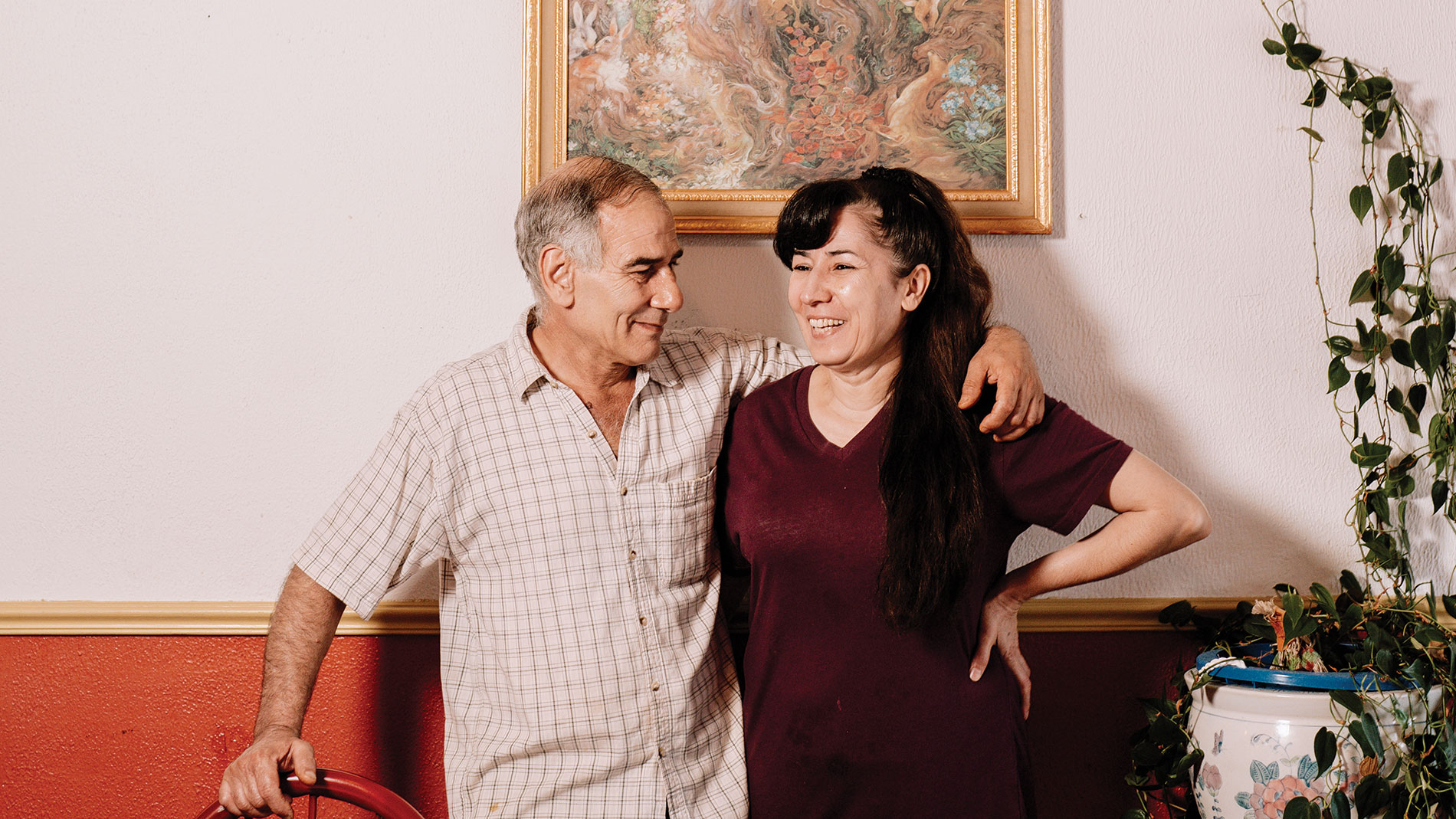 From educated professional to dishwasher to successful restaurateur: It’s a familiar story for many emigres who have fled their countries of origin due to war, oppressive regimes, dangerous political situations, or just to start over in new a country. And it never ceases to amaze.

Mohammad and Sofiya Abdolrezagh opened Taste of Persia in 2019 amid South Grand Boulevard’s stretch of multicultural eateries. The couple’s journey began in two different countries that they left a decade apart, before they met in Russia, fell in love, married and eventually settled in St. Louis. Mohammad, a slender, energetic man of 64, fled Tehran for Vancouver in 1985, leaving behind a bloody war between Iran and Iraq. In Iran, he was an electrical engineer for a gas and pipeline company, but with professional opportunities non-existent in Vancouver, he got a job as a dishwasher in a Persian restaurant. Six months later, he owned half the buisness. “I learned very fast,” he explained. That education put him on track to own restaurants for the next 36 years.

Fast forward to around 1998. Mohammad had moved to Moscow where he managed the Russian end of his brother’s trading company. Sofiya was there too, living with her family as illegal refugees after escaping Afghanistan’s civil war; they had left in 1995, one year before the Taliban took control of Kabul the first time. With her brother serving as a general in the Afghan military and Sofiya attending university and working as a journalist, she knew their lives were in jeopardy. “If they saw us, they would kill us,” she said. “When I heard they were coming, at 2 o’clock in the morning, my sisters, my brothers, we leave everything, all our life… Oh my God, it was too much havoc.”

Sofiya never thought she’d see the Taliban regain control of Kabul. “I’m scared really bad for the people there,” she said. Fortunately, she no longer has any family living in Afghanistan. “I’ve never been back, even when my friends wanted me to visit.”

She and her family lived in Moscow for 12 years and were never accepted as “official” refugees by the Russian government. Mohammad recalled: “Five years of applying through the U.N., she said she was finally approved to move to the U.S., [and asked me] ‘So, what you want to do?’ I said, ‘I have no choice, we should go together.’ We landed in New York and after a couple days they sent us to St. Louis because she had a brother here.”

Three months later, he had his own restaurant, Grand Mediterranean Kabob Cafe. After that, around 2008, the Abdolrezaghs bought Hot and Sour in Chesterfield, a popular Chinese eatery where he added Persian and Indian dishes to the menu. But the grind took its toll on the couple, and they sold five years later. “That was too much, basically seven days a week, morning and night. We were burned out,” he said.


He drove a cab for St. Louis County Cab, sometimes 18 hours a day, before deciding to get back into the restaurant business. After working out a deal with the owner of Baida Moroccan Restaurant (now Terror Tacos) to enclose part of the building’s space, Abdolrezagh did his own renovations to open Taste of Persia in April 2019. A year later, the coronavirus pandemic shut down the restaurant industry. “The beginning was great. After the pandemic hit, business dropped, but we just continue,” he said. With business picking up, he knows the restaurant will be back to pre-pandemic levels. “Most people, they don’t know about Persian food until they try it. When they try, they come back, back, back, and they bring lots of people,” he said with a smile.

It’s that smile and graciousness that makes Mohammad’s front-of-house style as appealing as the homestyle cooking he and Sofiya dish out from the cramped kitchen. The menu combines Iranian recipes – some from Mohammad’s mother, others from his previous Persian restaurant experiences – with a few Afghan dishes, courtesy of Sofiya, like qabeli rice, sheer berenj (rice pudding), and the country’s national dish, lamb shank (qabeli pilau). Like her husband, she had no cooking or restaurant experience when she left her country. “I learned cooking by watching my mom. She was the best cook in my family. Oh my God, she made everything perfect and amazing,” Sofiya recalled.

Taste of Persia sticks to the basics. You can’t go wrong with hummus as an appetizer, but start with a bowl of aash, a rich, thick soup packed with noodles, garbanzo beans, lentils, spices, dried mint and yogurt for a touch of creaminess. What was delicious in summer will become comforting when winter arrives. Shirazi salad, though, was the perfect summer dish to cleanse the palate: a bright, fresh, crunchy combination of onion, cucumber and tomato in an oil-free house dressing. If you’re going to eat naan, you may as well have it with an order of kashke bademjan, a warm eggplant dip topped with thick stripes of yogurt and a hint of cumin that I liked better than any baba ghanoush.

Upon Mohammad’s recommendation, I can now also recommend the deliciously savory ghormeh sabzi, composed of slow-cooked beef, kidney beans, spinach and several green herbs. What the menu didn’t convey was the addition of house-preserved lemons and barberries (a pomegranate-like fruit), both adding unexpected zingy sour notes, balancing the stew’s richness.

Of course, there are kebabs. Lamb, ground beef, beef tenderloin, chicken: Mohammad Abdolrezagh has practically built his restaurant career on skewered grilled meat. As you would expect, they are top sellers at Taste of Persia. Marinated for 24 hours in lemon juice, garlic and pepper, any of them are a great choice, but splurge on one of the king platters for the best variety: four juicy kebabs accompanied by grilled tomatoes and basmati rice simply dressed with butter and saffron (qabeli, biryani and zereshk rice options are worth the upcharge).

Like many Middle Eastern restaurants, Taste of Persia serves a taste of India, which may seem like a strange intersection. But Abdolrezagh said he’s always had Indian food on his menus because “Americans love it, and they are bestsellers – amazing.” Here, butter chicken and chicken tikka masala are popular, with the former marinated in ginger, garlic and curry spices and simmered in a creamy tomato and butter sauce for a mildly sweet flavor.

Taste of Persia is a true family operation, with Sofiya and Mohammad cooking; their son, Ahmad Abdolrezagh, assisting where needed; and their daughter, Ghazaleah Abdolrezagh, handling all the management, financial, marketing and social media aspects of the business. Mohammad, always the restaurateur, aims for a bigger place, one with a much larger kitchen. In the meantime, back in the small kitchen, there are kebabs to grill and meat to marinate for the next day.

Vibe
Simply decorated, relaxed and cozy dining room with inside seating for about 40, plus sidewalk dining, weather permitting