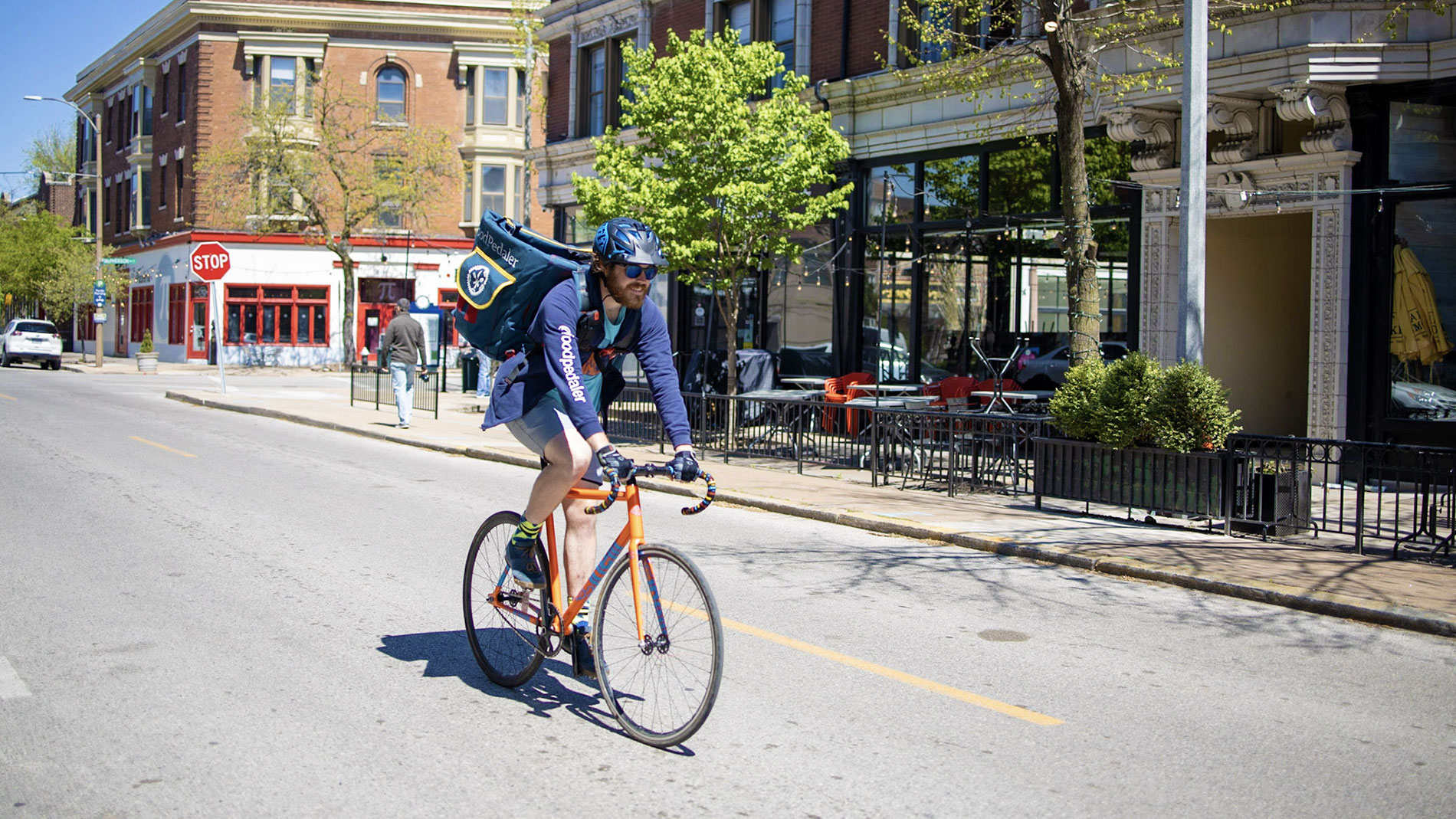 A year into the pandemic, the face of food delivery in St. Louis is still changing

For a lot of people, getting food delivered used to mean Chinese or pizza; most other meals required dining out, or at least leaving the house to pick up food. But with the pandemic limiting the ways diners can patronize their favorite spots, many restaurants have switched to carryout, including some that have never offered it before. Now, restaurants are contending with unprecedented numbers of to-go orders, which can mean paying astronomical fees to delivery services that demand up to 30% in commission for managing ordering and delivery. While some local restaurants have found silver linings in the services that apps like Grubhub and DoorDash offer, others have searched for their own solutions, including a locally based delivery app that offers a more environmentally – and for some, financially – sustainable option.

Nudo House used to use a delivery service called Skip the Dishes, which was folded into Grubhub in its U.S. markets in 2019. When the new partnership proved to be unsatisfactory, Nudo House switched to Postmates. “We didn’t like what [GrubHub] was offering in terms of fees, so we went with Postmates,” explained Nudo House general manager Chris Ladley. Between the two Nudo House locations and sister restaurant Mai Lee, the restaurants were able to get a small break on the fees. “They’re still taking money from us, but it’s a necessary evil,” he explained. Nudo House’s Delmar location has been operating with over 70% of its sales coming from carryout and delivery recently, meaning a ton of orders are coming through Postmates. For most restaurants, keeping the commission as low as possible is a major priority, especially now, when a lot of people are dining out less. “Margins on food are already slim anyway,” Ladley pointed out. “And then to give [GrubHub] 30% off the top for somebody to maybe deliver your food in a decent amount of time?” That didn’t work for Nudo House.

Their issues with Grubhub extended beyond just the fees; Ladley said the ordering process was a headache and left little room for customer interaction, which is a problem when dealing with something like a food allergy or an on-the-fly menu change. “We’d get a phone call from a call center in a different country placing the order, and if we had questions about a modification, we couldn’t get in touch with the customer,” he said. “Postmates has a better user interface, though it’s still not great.” On the plus side, Postmates does allow restaurants to contact patrons with questions and issues.

That said, Postmates leaves a lot to be desired when it comes to allowing customers to express gratitude directly to the restaurant they’re ordering from. “We allow tipping, but Postmates does not. So if you order [through Postmates], you can’t tip the restaurant,” Ladley said. “Our tips are spread out across the entire staff. You’re not just tipping the person who makes your order; there’s a lot of people.” If you do tip via the delivery app, it goes straight to the driver, and in light of the other fees (delivery fees, taxes, et cetera), people are often less inclined to tip drivers well, so nobody wins (except, of course, the app itself). Thus, Ladley urges customers to call and order directly from Nudo House; that way, they can be assured quick service – “You’re never going to wait more than seven minutes for your food [when you call],” he said – and can contact the restaurant directly with any issues or mistakes. “I get that it’s more convenient [to order online], but I’d still much rather just have people call us or come in. It’s more economical for everybody to take that third party out of the loop,” he contended.

Some local restaurants have decided to bypass the apps entirely by starting their own delivery services. Maplewood hotspot Elmwood offered grill-forward fine dining before the pandemic but has temporarily become a carryout pizzeria (with rotating specials from the old days). Elmwood co-owner and general manager Chris Kelling said they never considered looking elsewhere for a delivery service. “Our goal is to keep the jobs and revenue in-house,” he explained. “And you can’t guarantee the quality of the product after a 20-minute ride home. We wanted to be in control as much as we could.” Overseeing the pizza from the oven to the customer’s doorstep allows them to make sure the pizza arrives intact and within a reasonable amount of time.

To get delivery up and running, Kelling brought on two more employees just to help with driving. Elmwood’s pizza delivery program offers slots every 15 minutes, with two rotating drivers switching off delivering pies to the customers within a six-mile radius of the restaurant. A $3 delivery fee goes directly to the drivers, while tipping at checkout is split between the whole team, ensuring everybody on staff gets a piece of the pie. Going its own way has been a good move for Elmwood, allowing it to focus on taking care of its team while also developing its pizza program (and its incredible branding).

Melanie Meyer, the solo act behind Korean-inspired restaurant Tiny Chef (located inside the Silver Ballroom), decided early in the pandemic not to offer delivery at all. Her decision was affirmed last week during a bizarre interaction with a random delivery driver who showed up to pick up food that wasn’t on her menu. “They don’t even ask if you want to be on there – they just throw whatever they think you are on there,” Meyer said, laughing. “The menu was actually for a Silver Ballroom in Utah or something. [The app] took their menu and put it on our menu. They didn’t ask.” She said the app not only got the menu wrong, but they also never reached out to confirm any of it. One can imagine her surprise when a driver showed up to her restaurant (before she was even open for service) trying to order “biscuits and gravy, a ranch wrap and chicken tenders” – dishes she’d never offered before.

Meyer is quick to point out that the app was the problem, not the driver. “She ended up being super awesome,” Meyer conceded. “She said, ‘I actually want to come back here as a customer!’” Nudo House’s Ladley, however, is more skeptical of the drivers, indicating that many of them are overloaded and therefore tend to rush around and confuse their orders. “A lot of drivers [work for] multiple spots: Grubhub, DoorDash, Postmates,” he explained. “Your bag might have been flopping around in their trunk while they were driving around for an hour.” Ultimately, wrong orders and long wait times reflect poorly on the restaurant, even when it isn’t their fault. “When people have issues through Postmates, they’ll call and want a refund,” said Ladley, who can’t issue refunds for Postmates orders. “I don’t have that money. I’m going to get paid for your order in two weeks,” he pointed out.

Still, Meyer is open to offering delivery one day. “I would like to, but I’d like to do it independently,” she explained. “I don’t want to do it through any third party company. I remember the fees that they use, how annoying they are, how rude they are.” In the meantime, she’ll continue focusing on carryout and, eventually, starting to offer more outdoor seating outside the Silver Ballroom.

Many restaurants in the Central West End and downtown have taken a different path to offering delivery by signing up with Food Pedaler, a local, bike-driven service owned and operated by Alex Ward. Recently celebrating eight years in business, Food Pedaler has grown its team over the years to include around 10 cyclists who hustle lunch and dinner to residents in their delivery zones; eventually, Ward said, he’d like to expand their coverage to include Tower Grove and the Loop, meaning that South City residents might be able to get that coveted late-night Gramophone sandwich without having to leave their homes.

With the influx in delivery over the past year, Food Pedaler has been in a prime position to pick up some extra business. “We lost a few restaurants to the pandemic, but we’ve added quite a few, and some that are St. Louis staples, like Juniper, Salt + Smoke and Edera (Italian Eatery),” Ward said. “I’m proud that we’ve survived and that we’re doing well.” Some of their other biggest clients include Pickles Deli, El Burro Loco, Rasoi, Rosalita’s Cantina and Pie Guy Pizza; for their recent anniversary, they offered menu collabs with places like Hello Juice and Smoothie and The Cup.

Food Pedaler is run through an app where customers can order from the restaurants of their choice; and though the service aims to keep things local and sustainable, it does charge fees like any other delivery app. Ward understands that for some restaurants, such costs put his service out of reach, but he strives to make it as accessible as possible, offering discounts to eateries that are members of GiftAMeal and the Green Dining Alliance. “We want to work with any restaurant that can work with us, and we definitely don’t want to cut into their profit margin. We work out ways to make sure they’re thriving from our partnership,” he said.

Undoubtedly, the pandemic has put local restaurants in a difficult place. Forced into new modes of service like carryout and delivery, businesses have had to weigh forfeiting control and revenue against the time and resources demanded by going it alone. All these choices have pros and cons, but what ultimately matters is that, despite a pandemic that has upended the status quo, restaurants and their communities are helping each other stay afloat. Regardless of how diners get their food, the fact that they’re still showing up for their favorite spots is a huge deal and is helping a good portion of the industry survive. That said, keeping things local doesn’t seem to be such a bad idea. 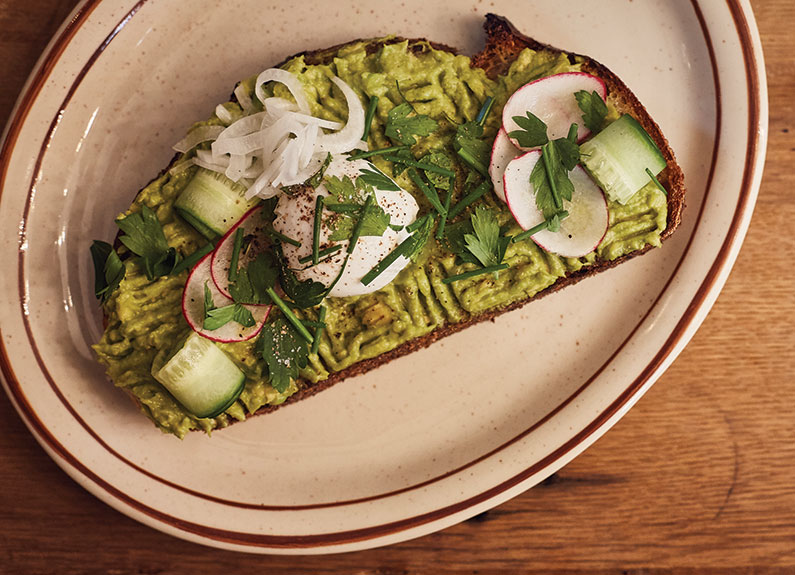 Avocado toast is a brunch favorite - here are three of our top toasts in St. ... 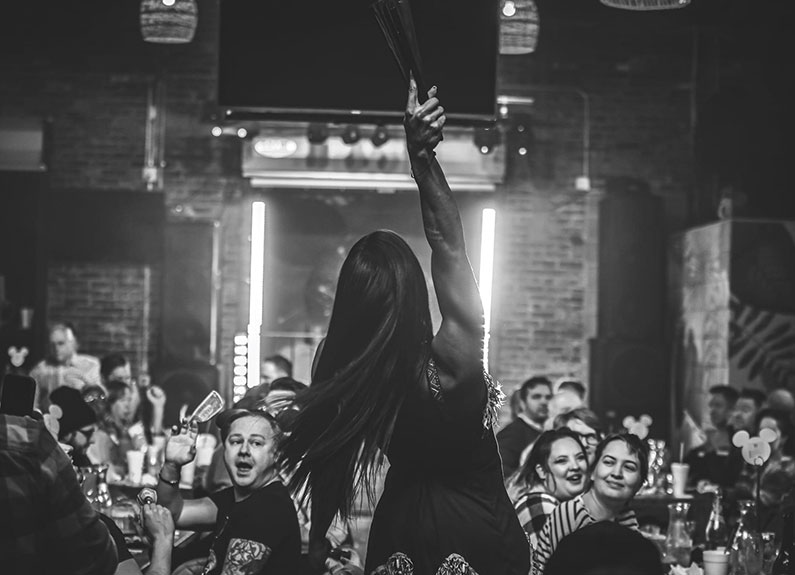 3 drag brunches to visit in the St. Louis area

Drag brunch is a long-standing tradition, and it’s easy to see why: It has all the ... 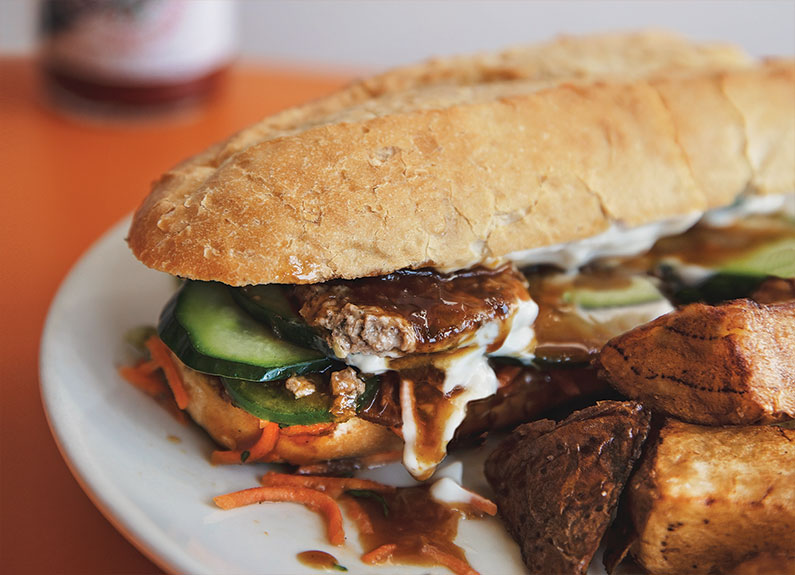 The Ready Room will be resurrected this summer – and the much-missed ...

The Wine & Cheese Place is adding to its four existing retail ...

Rise CoffeeThe hearty avocado toast at Rise is one of the best ...