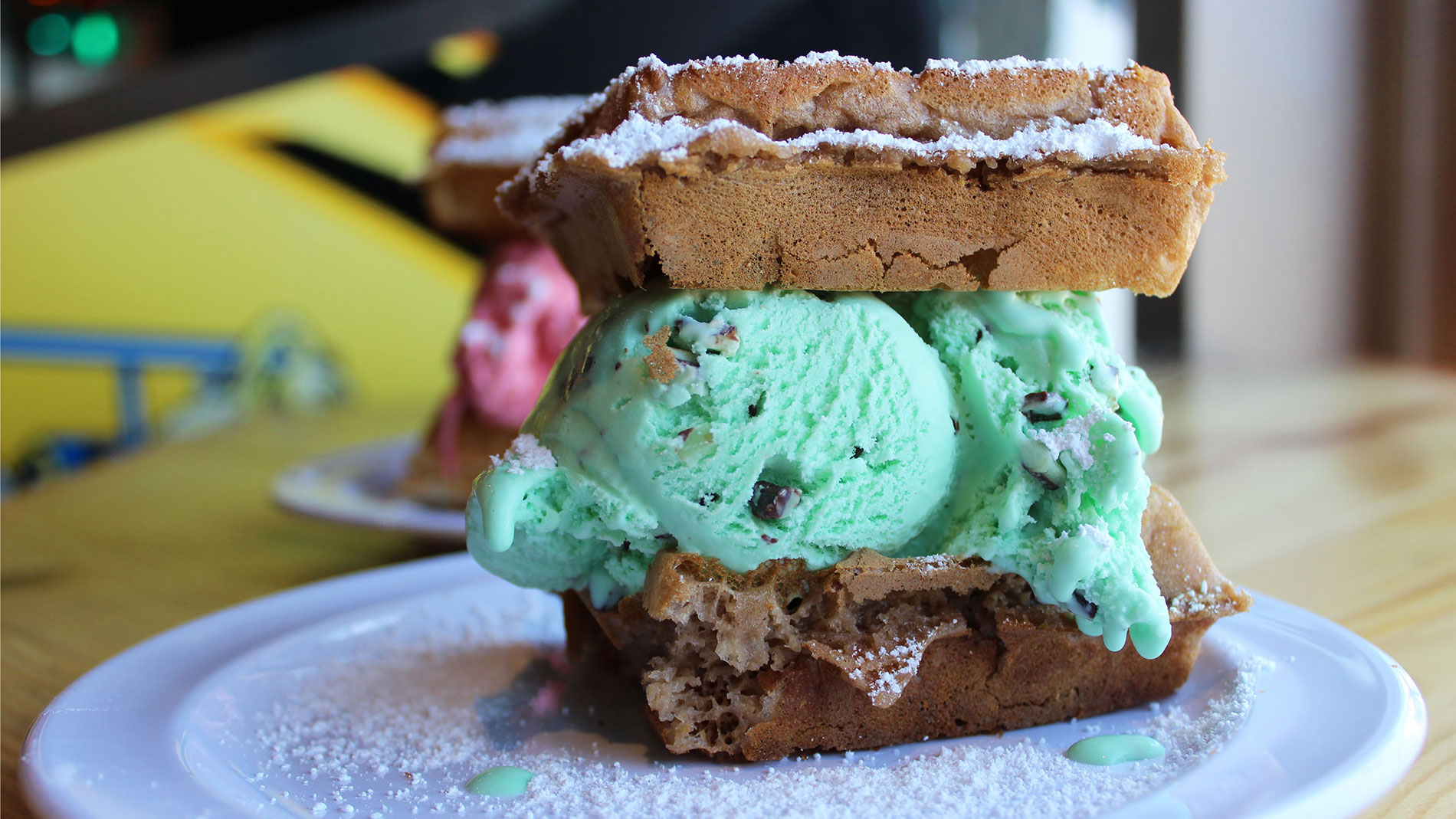 This summer, Boardwalk Waffles & Ice Cream owner Eric Moore will be three steps closer to his dream of opening 15 local locations in five years. As reported by the Riverfront Times, the highly anticipated Grand Center location sits at the corner of Olive Street and North Grand Boulevard on the first floor of the Metropolitan Artist Lofts building and is slated to open in July. The store, which was just announced in early February, will keep the same colorful aesthetic as the Maplewood location but will have a different layout, including a bar and stage for live music in the nearly 3,000-square-foot space.

Moore looks forward to feeding hungry Harris-Stowe State University and Saint Louis University students and meeting the cravings of late-night theatergoers. In keeping with the arts district, Moore is going beyond and above for fans of his waffle-ice cream sandwich concept. “When I met with the architect, we decided to create a unique visitor experience with mezzanine seating above the kitchen where customers can watch the waffles and ice cream being made,” he said.

What better place for Moore to explore his creativity than Grand Center – the hub of urban arts, the symphony and touring Broadway musicals. Moore said he’s excited to join the Grand Center community and sees strong potential for collaboration in what he calls, “the cross-pollination of ideas,” with his creative neighbors.

Beyond Grand Center, if his expansion plans sound ambitious, Moore might have found the ultimate sweet spot in the culinary world. “One of the things that I love about our concept is that there is not a lot of negativity or failure with ice cream and waffles,” he said. That, coupled with a flexible business model and low real estate prices, may tip in his favor.

More details have also surfaced about Soulard and South County locations that have been in the works for a while. A Boardwalk Waffles is slated to open at 1001 Russell Blvd. in Soulard in May, appealing to the residential community, weekend farmers market shoppers and late-night revelers. The roughly 1,600-square-foot space will have a liquor license and an aesthetic similar to the other locations. It likely won’t have a stage, but there could potentially be live music.

And for South County fans, your wish has been granted. “I get more people reaching out about a South County location than anywhere,” Moore said. A satellite location is coming to 4348 Telegraph Road in April, featuring 16 ice cream flavors and seating for around 12. If this smaller location is successful, there’s an adjoining building that Moore could purchase and renovate to expand the space.

In addition, the Maplewood menu will soon include brunch and liquor selections, which all locations, aside from the South County satellite spot, will feature. For his brunch offerings, Moore plans to stay on brand. “It will be a savory waffle brunch,” he said, mentioning a jalapeno-cornbread waffle served with bourbon-maple syrup may be on offer. “No eggs, no bacon, no sausage. I am staying with my core product. When you show up, you know what you’re getting.”