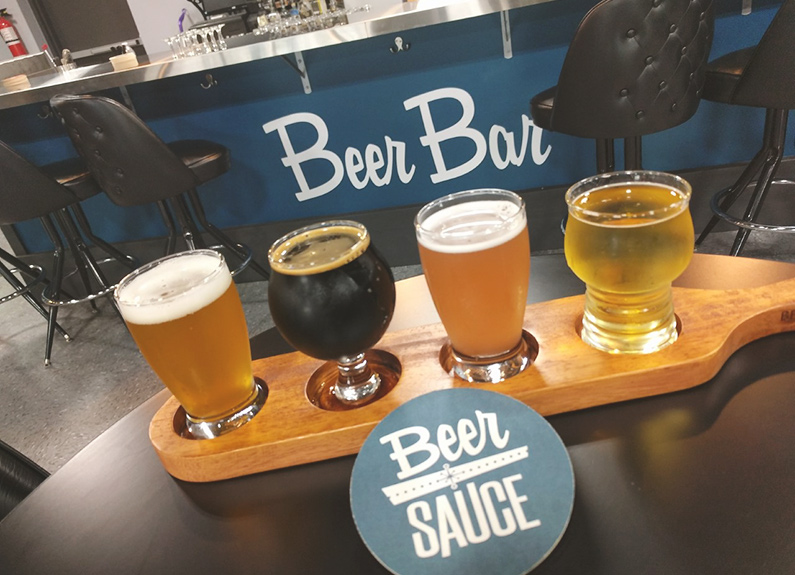 BeerSauce Shop will open a third location in Ballwin this Friday

BeerSauce Shop, a locally owned retail store where you can eat and drink as you shop, is opening the doors to its third location at 14738 B Manchester Road in Ballwin on Friday, Sept. 18. The first location opened in 2017 in St. Peters, but the concept has quickly expanded to include locations in Sunset Hills earlier this year, and now in Ballwin. A fourth store in Kansas City is set to be opened by Halloween.

“[Expanding] was definitely a part of the business model from the very beginning,” said BeerSauce founder Andrew Tessmer. “We wanted to bring what we call  ‘the flavor’ to all the communities we thought maybe weren’t getting the trendy spots, but wanted good craft beer, wanted a bottle shop, wanted artisan sauces and a cool place to hang out and shop while they were drinking.”

The Ballwin store will serve the same variety of approximately 250 sauces and 600 craft beers as the other locations. Their menu of barbecued meats will expand to include burnt ends and a brisket Reuben. The whiskey selection, which has been mostly local up to this point, will now include some out-of-state spirits.

Behind the 24-foot stainless steel bar, there will be 24 taps, 22 of which will host a rotating selection of beers. The other two will be rotating craft sodas from Excel Bottling Co. in Illinois. Along the back wall, there will be a 22-foot sauce bar. “We’re pretty literal,” said Tessmer, “it’s beer and sauce.”

The new store is set up to open during a pandemic. Only half the tables are currently installed to ensure social distancing, and the bar is long enough to sit 6 feet apart. There is no online ordering component, but food can be ordered in the store and taken to go.

The Flavor School series, which offers classes on beer, barbecue, whiskey and more, as well as the Beer Nerd class, have moved online. Select classes will occur in-person, but will likely be capped at 20 participants. The Beer of the Month program delivers eight limited edition and new beers to homes within five miles of each store. “We have had to adapt to bring the flavor to people at home,” said Tessmer.

Tessmer said he expects there to be franchise opportunities by mid-2021.