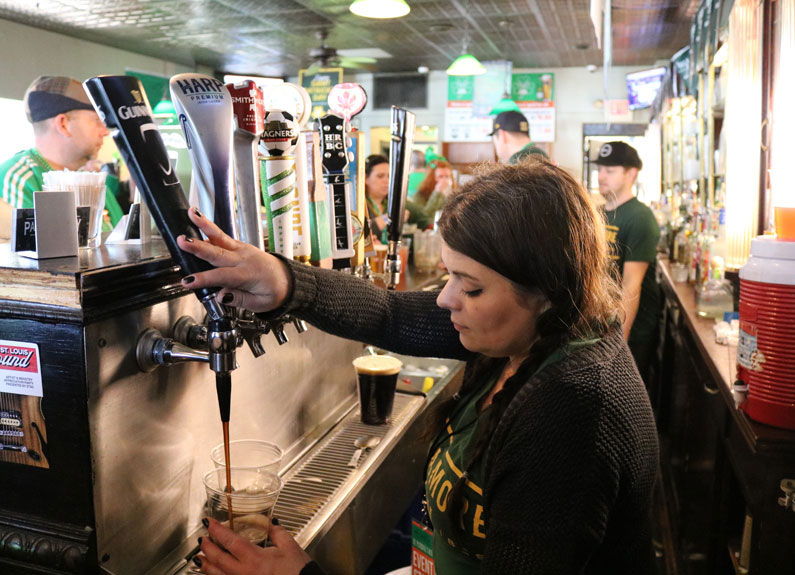 Editor's Note: Since publication, Center for Disease Control recommendations for controlling the spread of the coronavirus have prompted the cancelation of St. Patrick's Day celebrations at The Pat Connolly Tavern and Felix's Pizza Pub.

With the coronavirus shutting down large public gatherings and events for the foreseeable future, St. Patrick’s Day will be fundamentally different this year. The hallowed Dogtown St. Patrick’s Day parade and festivities have been canceled, and local businesses are adjusting.

The Pat Connolly Tavern operations manager Kate Pogue said they typically start preparing for St. Patrick’s Day a month before the event. “We have other stuff we’re doing behind the scenes prior to that,” she said. “We’re a very small restaurant, so we use it as an opportunity to do some spring cleaning, get ready for the influx of inventory we’re going to be ordering.”

She said the bar had already received some of its liquor, but fortunately hadn’t placed the full order yet. However, they have already ordered some food for the event. Pogue said they haven’t yet decided if they will host their traditional St. Patrick’s Day breakfast.

Felix’s Pizza Pub has found itself in a similar situation. “We usually get everything dropped off the day before, so we haven’t been overloaded with everything we would have purchased,” said front of house manager Katelyn Taylor. “We’ll be working a little extra to make sure we’re stocked up for Tuesday, but not anything near what we would be if we were actually having the parade.”

Pogue said Pat Connolly’s will still host its St. Pat’s Pregame event Saturday, March 14, but inside instead of its usual outdoor tent. St. Patrick’s Day festivities will take place on Tuesday with live Irish music and corned beef and cabbage.

Felix’s plans to keep most of its weekend and holiday festivities the same, as well. On St. Patrick’s Day, Taylor said they will open at 8 a.m., offering free breakfast with the purchase of a drink. They’ll switch to lunch at 10 a.m. and serve slices, wings and more. A DJ will play music in the dining room.

“It’ll be a really fun time,” Taylor said. “Obviously we won’t be able to do anything outside, because of the [outdoor] liquor license, which we do not have because everything is cancelled. We’ll still have a really good time, and make sure we’re taking extra precautions to clean everything and sanitize.”

Both restaurants are looking forward to a big turnout from St. Louis, a city that historically loves this holiday. “The overwhelming response we’ve gotten so far is that people do plan to come out to our bar, to neighborhood bars,” Pogue said. “We’re unlike any other neighborhood in St. Louis, and neighbors want to support local business. We do anticipate being very busy that day.”

Taylor feels similarly. “We’re all kind of working together, so I think if anything, this is going to bring us closer together,” she said. “I know some people are really worried about it. I think it’s really showed our community what it is to be a community.”