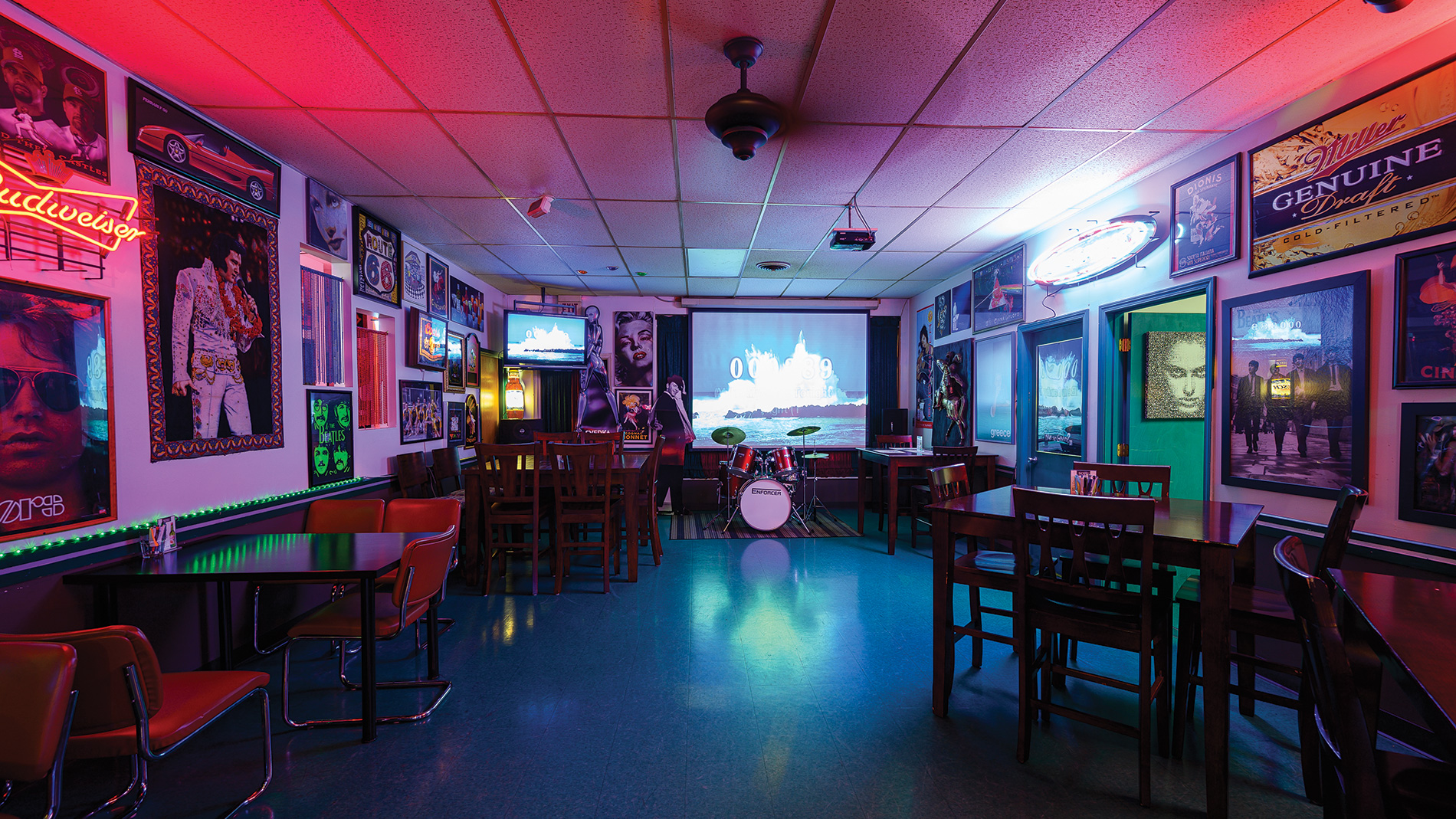 the karaoke lounge at koreana photo by david kovaluk

Located in a nondescript strip mall in Chesterfield, Koreana Karaoke doesn’t look like much from the street. Brave the long, dim hallway of closed doors upon entering, however, and you’ll find a strange but charming karaoke bar.

The first thing you should notice at Koreana is the owner, June Krohr, who goes by Mama June. Instantly familiar and endlessly helpful, she will be your karaoke guide. The second thing to note is that it’s impossible to classify the crowd here, aside from its deep come-as-you-are feel. Koreana seems like a place where regulars belly up to the bar for a beer and a chat with Mama June.

There are two ways to sing karaoke. One is by renting a private room (also known as noraebang-style) for $40 an hour. Most rooms are directly off the narrow front hallway lined with movie and music posters – through the closed doors you passed on your way in. These are basic with comfy couches and chairs, large flat-screen TVs, thin curtains blocking the windows and hotel room-style landscape paintings on the walls. “Are you in someone’s basement?” a friend was asked upon Snapchatting a video of our group singing karaoke. Fair question.

If you’re up for braving the crowd, the other way to sing is in the main bar area. Karaoke is free, but there’s a two-drink minimum. With an aqua-tiled floor, retro diner-style chairs and wildly eclectic decorations, it’s hard to know where to look. There’s a velvet Elvis poster, a life-size Frank Sinatra cut-out, along with posters of The Beatles, Bob Marley and countless other late-greats. There are also what appear to be random travel posters, Venetian-style masks, a stuffed fish hanging from the ceiling next to a disco ball and a fully decorated Christmas tree propped up in one corner.

Singers select songs from giant binders incorporating 13 languages, from Chinese to Russian. The English collection leans slightly country – there is almost an entire page of Merle Haggard – but there are also decades of pop and, curiously, a page of praise and worship songs.

In the main lounge, you write your selection on a Post-it and take it up to the bar. There’s little fanfare in announcing songs – you just have to pay attention and run up for the mic when it’s your turn.

In the private rooms, you can also search for songs on YouTube. My group went this route, our only issue being a lag from sluggish internet. We still had a blast, especially once Mama June brought us tambourines.

Once the crowd shows up (this is a second- or third-stop bar, I was informed), it’s a friendly, late-night bunch eager to cheer on singers who either remain at their seats or make it a show. Rumor has it that some nights, the drum set in front of the karaoke screen gets some action. The selection can vary wildly, but I heard everything from Frankie Valli and *NSYNC to Patsy Cline, Frank Sinatra and the Gin Blossoms. I ended up staying way longer than I planned just because I kept wanting to hear what the next song would be.

For liquid courage, there’s bottled beer – mostly domestics with a few craft options. There’s no cocktail menu, but the bar is reasonably stocked. Likewise, the wine list is small, but Mama June can have what you want ready if you call ahead. She also keeps a limited supply of Korean soju on hand. Apparently Koreana does serve food, but I wouldn’t order any here. I didn’t see a menu or anyone eating on my visits.

Maybe it was the retro-style seating, the eclectic crowd or the insane decor, but Koreana felt like stepping into Twin Peaks, minus the sinister overtones. It’s a bit off-kilter in a delightful way.