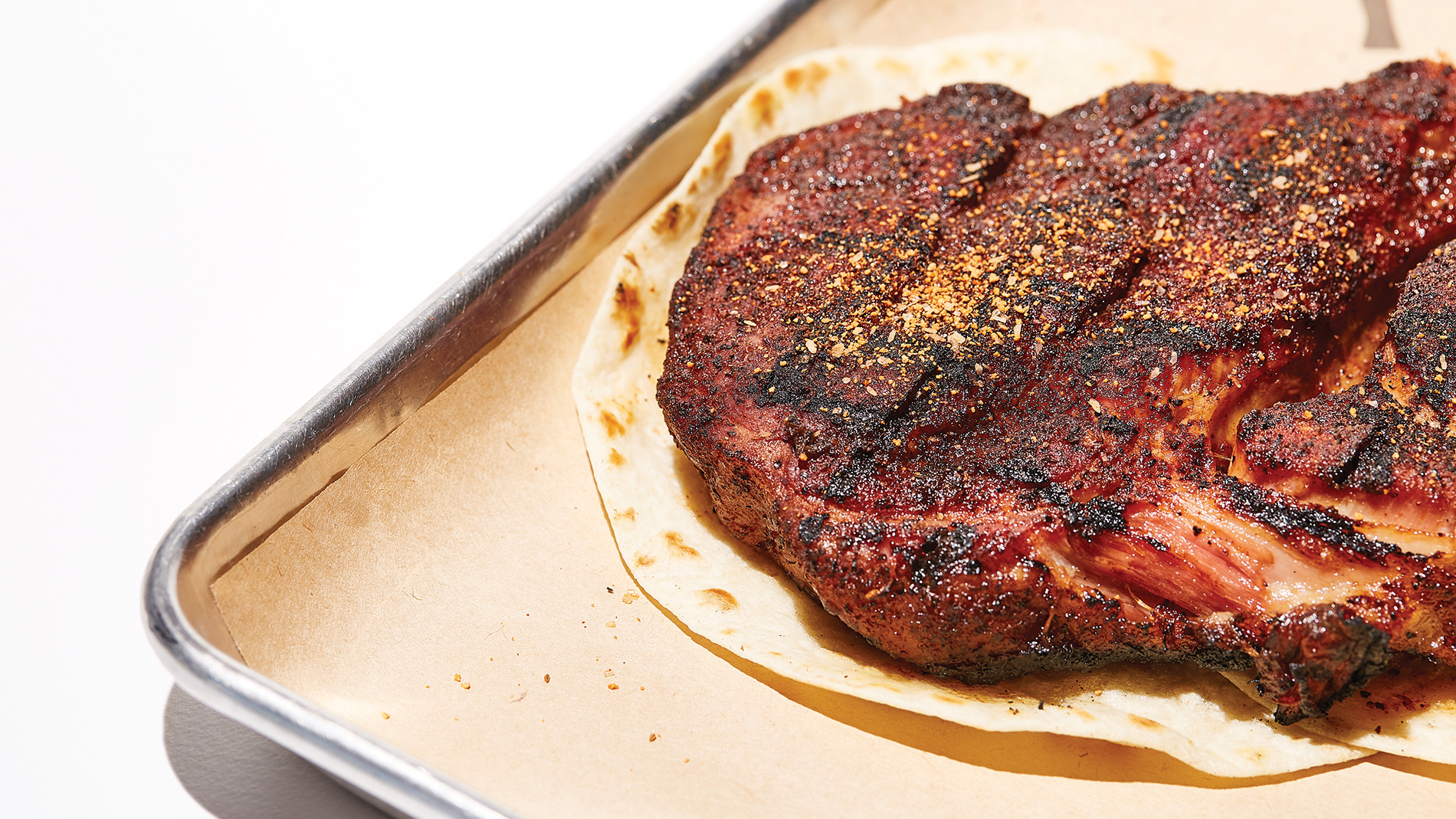 One afternoon at Beast Butcher & Block, my colleague quickly twisted a wingette, sliding out its two thin bones – she’s an expert – before popping the tender, dark meat into her mouth. “Nobody’s making wings like these,” she said with the focus of a connoisseur.

Gloriously burnished and flecked with dry rub, the wings were my new favorite. But it’s hard to screw up chicken wings – why were these so good?

Like most pitmasters, Beast co-owner David Sandusky has his own set of rules. The recovering fine dining chef utilizes not only different rubs to complement different meats, but different smoking woods as well – which is why those irresistible wings came imbued with the gentle perfume of hickory along with a hint of dill and heat.

His other rule: Nothing on the menu is served more than a few hours off the smoker – meaning those six giant smokers outside run constantly.

That level of barbecue isn’t new for Sandusky. He and his wife, Meggan Sandusky, opened the award-winning Beast Craft BBQ Co. in Belleville five years ago. The Illinois gem is still packing them in and winning praise, but the couple took the risk of opening another Beast about 20 miles west so Sandusky would have more creative freedom.

With nearly triple the space to play with, Beast Butcher & Block is really several operations in one, including a main dining room for about 100, a front patio, a full-service retail butcher and prepared food shop called The Butchery, off-site catering and The Skullery: a glass-enclosed, private room equipped for “fire-to-table” tasting menu dinners, cooking classes and collaborations with local chefs. This open-ended approach conveys Sandusky’s confidence and swagger, letting him push boundaries and our expectations of what a barbecue restaurant is.


Like its Belleville sister, brisket, ribs, wings, sandwiches and an array of sides drive the regular, counter-service menu. There are two types of brisket, both wet-aged, generously treated with salt and pepper and white oak-smoked until fork-tender. The Snake River Farms’ version (SRF on the menu) is a spectacularly marbled domestic wagyu, with an extra fatty, beefy taste and texture. Pair with a side of the pit beans – a four-day process that includes smoking under the brisket to soak up drippings – and nothing else needs to be said.

The wagyu brisket would have been my favorite meat were it not for the specialty Duroc pork from Compart Family Farms in Minnesota. The breed produces meat as richly marbled as a prime rib-eye and a taste no commodity pork can provide, which makes Beast’s signature pork steak several cuts above any other in town.

Its beauty is two-fold: meat and sear. Seasoned with just salt and pepper, the butt cuts are hickory-smoked until tender, then basted with sauce and chargrilled, resulting in a tantalizing caramelized, crisp crust that makes sauce unnecessary. A hit of dry rub at the end adds sweetness and warm, peppery spice. It is ridiculously tender, juicy and so thick you can order a half portion. No wonder pork steak is the most popular item at both locations.

So are the Brussels sprouts: deep-fried, tender and crispy with bits of uncured, smoked and deep-fried pork belly. Spare ribs get a similar treatment as the pork steak, rendering them tender with just enough tug to keep the meat from getting mushy.

The Sunday nose-to-tail brunch buffet recently launched by Sandusky and executive chef Ryan McDonald (most recently chef and co-owner of the now-shuttered Good Fortune) might be the best brunch in town. At $24, it’s definitely the best bargain.


A massive amount of smoked meat hangs over The Skullery’s flaming hearth, ready to be cut to order: spit-roasted porchetta with fat dripping from its crackling mahogany pork belly wrapped around stuffed pork loin, a hog head for luscious pork jowl, brisket, ham and turkey. Even omelets and scrambles are cooked over live coals. Several nearby tables are laden with breads, pastries and every imaginable side, from house-made biscuits and gravy to roasted root vegetables.


Beast’s occasional “interactive live-fire tasting menu” dinners are also held in The Skullery. But, unlike brunch and the rest of my meals over the course of several visits, I found the $100, eight-course tasting menu experience the most challenging to enjoy or understand.

For a fire-themed menu, very little was noticeably fire-cooked or served hot. From where did these dishes spring? As well executed as they were, it was difficult to find a unifying or exciting theme that tied the dishes together.

There is nothing more elemental than wood, fire and smoke. No one else in town has a better opportunity that experiments with that theme, but I found myself thinking of the boundary-pushing tasting menus at Bulrush and Savage. This didn’t have the life force of either the fascinating, foraged Ozarkian food of Bulrush or the artistic flair of Savage.


When Beast Craft opened, Sauce named it a best new restaurant of 2015. Last year, Thrillist ranked it as one of the 33 Best BBQ Joints in America and Food & Wine called it the Best BBQ in Illinois. Just wait until they visit The Grove.

Michael Renner is a longtime contributor and critic for Sauce Magazine.