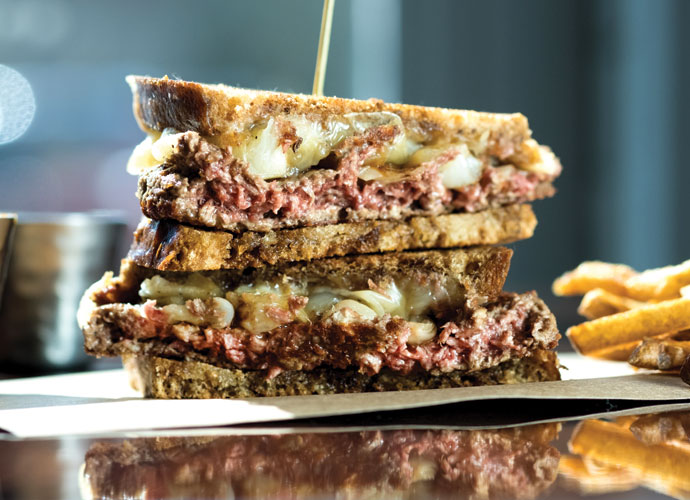 1. Nothing Is Impossible
The Impossible Burger’s inventors had one goal: make a patty that looks like meat, smells like meat, tastes like meat and has the texture of meat without using any meat. When cooked right, the Impossible Burger tastes like the real thing. Plant-based “blood” (yeah, you read that right) is what makes the patty taste and look like beef – when cooked medium-rare, it bleeds like meat. Coconut oil delivers that addictive greasiness synonymous with a juicy burger. Try it at Polite Society, where you can get it in classic cheeseburger form, but we recommend it in a patty melt with buttered and toasted rye, melting cheese, caramelized onions, mustard and tons of Russian dressing. Versions have also been spotted at Frida’s, Retreat Gastropub and The Royale.

2. Move Over, Miss Muffet
Whey, the commonly discarded byproduct of making cheese and yogurt, is getting a little more respect on local menus. Due to its acidity, whey can be used for marinades and as a protein supplement, while its probiotic qualities aid digestion. Along with occasional dinner menu appearances, Vicia recently featured house-made yogurt whey in a cocktail with Plymouth Gin, blood orange juice and club soda, as well as in a tonic of rose tea-infused yogurt whey. Sidney Street Cafe makes use of a carrot-whey emulsion to complement a pan-roasted chicken breast, gnudi and Parmesan mousse. Those looking for a sweeter sensation can try Marcoot Jersey Creamery’s line of fruit and whey ices available at Dierbergs and Schnucks.

3. What a Jerk
Few St. Louis-area restaurants offer authentic Jamaican fare (h/t: De Palm Tree and Irie Eats), but a handful of unexpected spots have offered their takes on the Caribbean classic, jerk chicken. Chef Matthew Birkenmeier spent six years cooking in Montego Bay, Jamaica, and occasionally throws a traditional jerk chicken preparation on the specials board at Quincy Street Bistro. The kitchen crew puts a fine-dining spin on it at The Preston, and Pangea chef-owner Jessie Gilroy adds a touch of the South with her jerk fried chicken. Pig & Pickle features several chicken preparations, including a jerk-inspired dish spiked with chipotle and served pulled with red beans and rice.

4. One for the Road
First, there were food trucks. Now, people are hitting the road with bars on wheels available for special events. The Wandering Sidecar Bar was the first to get in on the action, and recently added a red 1969 Chevy truck to its fleet. Food truck progenitor Sarah’s Cake Stop has added beverage to its repertoire with Sarah’s Drink Stop. Last year, brewer-turned-barman Luke Oldham launched Beer Outside, a 20-tap beer trailer that hosts pop-up Biergartens, and CWE mainstay Brennan’s rolled out its Mini Me on wheels, complete with cigars and a turntable. Look for frozen cocktail bar Narwhal’s to take its new wheels for a spin this summer.

Bars equipped with pour-your-own beer and wine systems combine two of our favorite things: tech and booze. Both Tapped in Maplewood and Germania Brew Haus in Alton use the iPourIt system, which equips customers with wristbands. Just wave them in front of your selected beer and start pouring; each ounce is automatically added to your tab. Handcrafted by Bissinger’s in the CWE built a self-serve wine wall that dispenses 2-, 4- or 6-ounce pours at the press of a button.

6. Here Comes the Sun
Long a familiar sight at farmers markets, sunchokes are now cropping up on menus all over town. These rugged, earthy little root vegetables can be enjoyed in myriad ways, from raw to roasted. A puree is a simple, effective way to make the most of sunchokes’ flavor. Boundary employs this approach to augment salmon and honey-roasted heirloom baby carrots to delicious effect, while The Preston at The Chase Park Plaza combines it with charred octopus, brown butter gnocchi and a smoked paprika vinaigrette. Elaia recently featured roasted sunchokes with braised chestnuts in a lobster bisque.

7. Got (Oat) Milk?
Oat milk is the new favorite nondairy milk for coffee. Where almond milk can carry the slightest bit of salt, and soy’s texture has some grittiness, oat milk is super smooth with a biscuit-y flavor and just a hint of sweetness. Swedish brand Oatly recently became available in the Midwest. Try it in a latte at Sump Coffee, Coma Coffee, Comet Coffee or Cursed Bikes and Coffee.

8. Hot Stuff
Peanut butter and jelly. Bacon and eggs. Cauliflower and harissa? While it may not be quite as iconic a pairing, the combo of the crunchy veg and Tunisia’s unofficial  national condiment has given local chefs plenty of inspiration. Sardella executive chef Ashley Shelton compresses the cauliflower with harissa before searing it, then tosses it with harissa again and serves it with herb yogurt, almond and garlic chips. At Reeds American Table, chef-owner Matthew Daughaday combines lemon pickled cauliflower with harissa – he said the mild citrus notes accentuate the North African spices. Meanwhile, at Blood & Sand, executive chef Brian Coltrain uses harissa as an accent on the plate with curried cauliflower, along with sour apple and pine nut brittle.