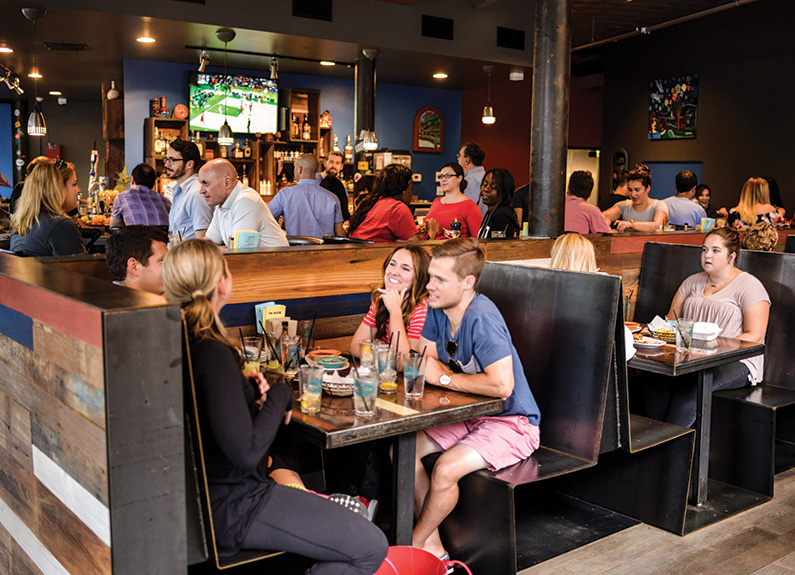 Is Mission Taco Joint a cantina with incredible grub or a taqueria with stellar drinks? Maybe it’s both. It doesn’t really matter – I’m happy to keep returning to debate the answer.

The Crowd At 10 p.m. any Friday, the pubs on the north end of Euclid Avenue in the Central West End are probably pretty quiet. The newest Mission location in the former Gringo space, on the other hand, has already run out of outdoor seating, and room at the bar is becoming scarce. It’s loud and getting louder. The dinner crowd has mostly filed out, leaving newly wiped tables for the next shift of patrons – a mix of young professionals and grad student-types. The late-night happy hour caters to chatty groups of friends, some couples and a healthy smattering of college kids who throw back shots, hunch over their phones and slip outside for the occasional smoke.

The Space A giant L-shaped metal-topped bar dominates the sprawling room. Aside from a mural of Mexican wrestlers with lightning-bolted lucha libre masks, the walls are adorned with bright blue paint. Silly luchadores notwithstanding, Mission is a smartly dressed, minimalist space far from a south-of-the-border caricature. The main room is awash in high-glossed wood surfaces that mix with metal chairs and an old tinned ceiling for an open, modern feel. On warm nights, diners spill onto a patio tight with tables and bright red metal chairs.

The Food “Drunk food” has too many negative connotations. Let’s say Mission Taco has great drinking food, perfected at its locations in Soulard and The Loop. Yes, you’ll have to fork over $3 for chips and salsa, but the spicy verde that came with my order was a lick-the-plate-clean kind of sauce well worth the price. The best time to quell taco urges is after 10 p.m., when the late-night happy hour drops all tacos to $2 a pop, since these corn-wrapped beauties aren’t exactly enormous. It’s fun to choose an assortment, but I’ve pared the menu to two favorites: the fried Baja fish and the beef brisket birria. Wrapped in a homemade corn tortilla, the lightly battered white fish is layered with a modest amount of shredded cabbage, pico de gallo, queso fresco and the true star: a spicy, smooth chipotle aioli. The slow-roasted beef brisket is mouthwateringly moist, topped with chunks of pork belly carnitas and finished with a one-two punch of avocado and a drizzle of fiery arbol sauce. These are so good I no longer waste time glancing at the rest of the menu.

The Drinks Mission’s bar staff is as busy as its kitchen, turning out layered, complex cocktails. Cheap, syrupy pre-mix margaritas are thankfully absent. A few sips from the $10 top-shelf Maestro Margarita, doused with Maestro Dobel tequila, were enough to get over any sticker shock. Avoid The Zombie, which the menu playfully touts as limited to two per person. The rum-centric drink wasn’t all that potent and was drowned in cinnamon, which, once lit on fire, fell into the concoction, making more of a disappointing winter drink rather than the warm weather treat that it should be. Much more satisfying was the smoky Oaxacan Firing Squad, a mix of mezcal, grenadine, fresh lime and bitters that started off strong and became smoother with every fantastic sip. The beer list was impressive and wide ranging, but not too intimidating. Even better news for after-hours guests, the late-night happy hour offers $2 shots of Four Roses bourbon and Lunazul Reposado tequila to wash down tacos from 10 p.m. till lights out.

The Bottomline Casual enough for a night out with your buddies but smart enough for a romantic evening on the town, Mission Taco’s newest outpost in the Central West End achieves what its predecessor Gringo could not: a bumping late-night cantina worthy of many a return trip.