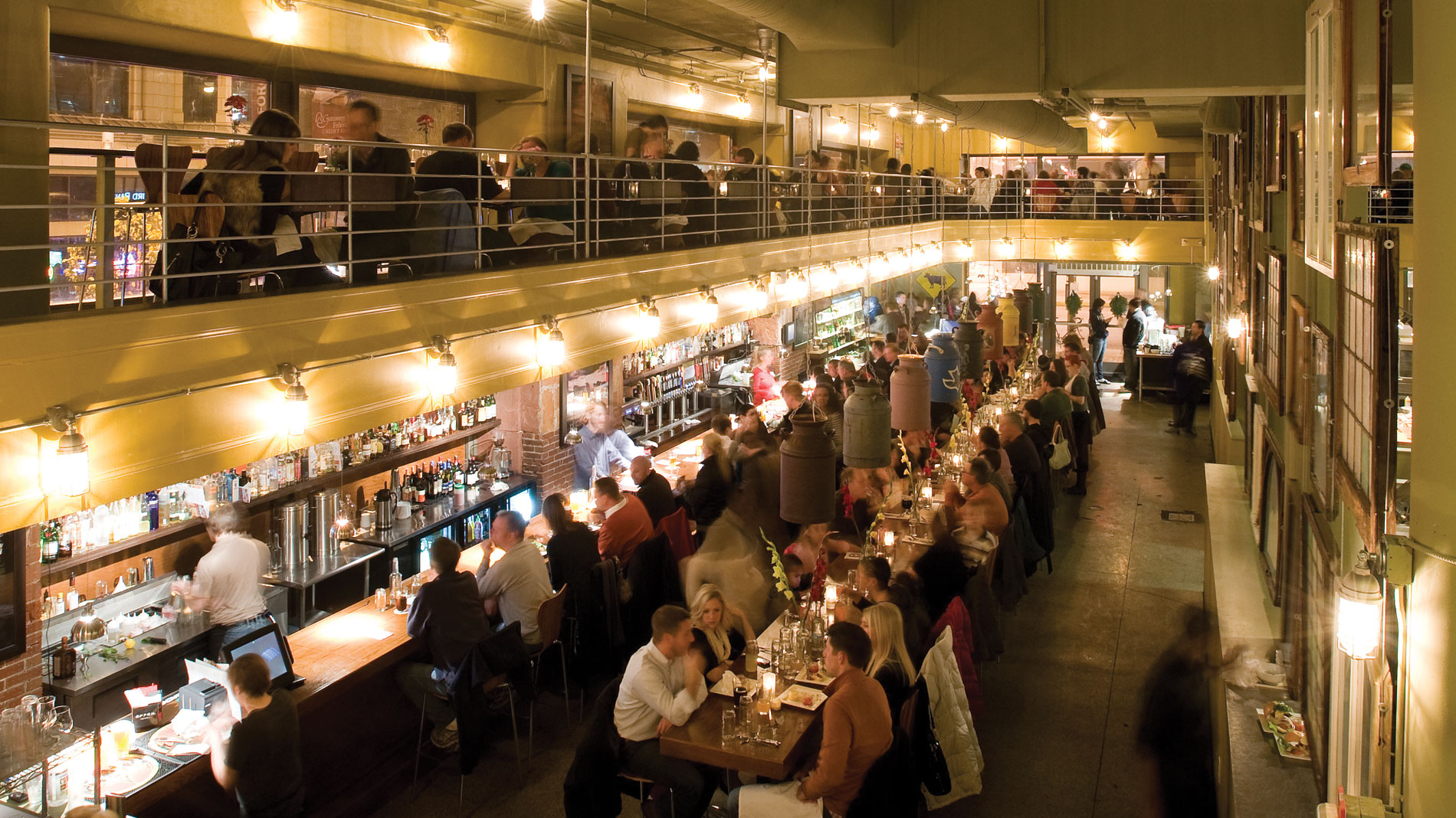 The hamburger is arguably the epitome of American cuisine – not because it’s some complicated culinary wonder, but because it’s simple, quick, satisfying.

Baileys’ Range looks to capitalize on this. Housed in the renovated City Gourmet building, Range is the newest restaurant under the wing of Dave Bailey whose belt notches already include Rooster, Baileys’ Chocolate Bar, and Bridge Tap House & Wine Bar. As with all of Bailey’s restaurants, the details in the design are impossible to ignore: balcony seating, an expansive communal table lit by a string of repurposed milk jugs, an open kitchen delineated from the dining area by a lot of antique stained glass windows, and Mason jars of all sizes harboring everything from salt to soda. Throw in house-made sauces, locally sourced ingredients and an impressive variety of humanely raised meats, and it’s clear that Bailey is tapping into two of the biggest trends running: 1) artisanal everything and 2) the “better burger.”

Bailey’s creativity and passion for food are evident on his menu. The beef is Missouri-raised and grass-fed, and Bailey has procured equally well-sourced non-beef options including bison, pork, chicken, duck and lamb. All burgers are served on white buns. These can be substituted with pretzel, vegan or gluten-free varieties, which are also made in-house. Each of the 16 unique burgers on the menu tout at least three to five toppings that showcase seasonality and complex flavor combinations. A weekly burger battle pits two specials against one another; the bestseller competes the following week.

Fries can be added for $2 and come with your choice of one of the Range’s delicious handcrafted sauces, which include a house-made ketchup (a purée of fresh tomatoes and four-spice) and a house-made rooster sauce (a humble but spicy handmade mayo with just the right amount of kick). Be sure to try the smoked onion rings. Served in a (very) generous portion, these hand-cut smoked rings were dipped in an elegant tempura batter and fried. A bite revealed a subtle sweetness that played perfectly with the smoke. They were even tasty cold – which is how they arrived.

The ABC burger was supposed to be topped with roasted apples, bacon and Camembert. Conceptually, this burger sounded superb. And while the crisp apple slices provided a bright contrast to the smoky bacon, the burger was substantially over-cooked. Equally frustrating: The Camembert – the item that truly sold us on the burger – was missing altogether.

The Paris was topped with a trio of mushrooms – crimini, shiitake and oyster – as well as caramelized shallots, arugula and Taleggio. Although we have no idea what an Italian cheese has to do with Paris, the subtle earthiness of the cheese complemented the mushrooms beautifully. But the meat was slightly overcooked; we ordered ours medium-rare, and it arrived medium. At least it wasn’t well-done this time.

Unfortunately, inconsistent preparation was one of the only consistencies throughout each of our visits. Of the 10 burgers we ordered, only one was prepared to the correct temperature. The size of the burgers were just as confusing. Though the ABC burger was a hefty seven ounces, the Paris was a paltry 3, maybe 4. On one visit, a gentleman who sat next to Dan at the bar and also ordered the Paris enjoyed a 6- to 7-ounce patty. And from the look of it, his burger was prepared to temperature perfectly.

On our first visit, which coincided with Range’s opening night after a month-long soft opening, our group was warmly greeted and promptly offered a space at that long, communal table running down the middle of the restaurant. While this seating design could appeal to a smaller party, the group consensus was that we would rather wait for a quieter table upstairs to open. We had tried to make a reservation several times, but the restaurant insisted we didn’t need one. After a lengthy wait, we were seated at a table upstairs and our drink orders were taken. The waiter brought over one drink and then the rest quite a while later. When we finally received our meal, we were just glad to be served at all.

Burgers are simple. But in order for simplicity to stand out, a certain level of skill and consistency is required. The menu at Baileys’ Range is mouthwatering, the space is beautiful, the house-made sauces and sides are superb, and the burgers have been given a great deal of thought. That said, if you can’t cook a good burger, a better burger isn’t even in the realm of possibility.