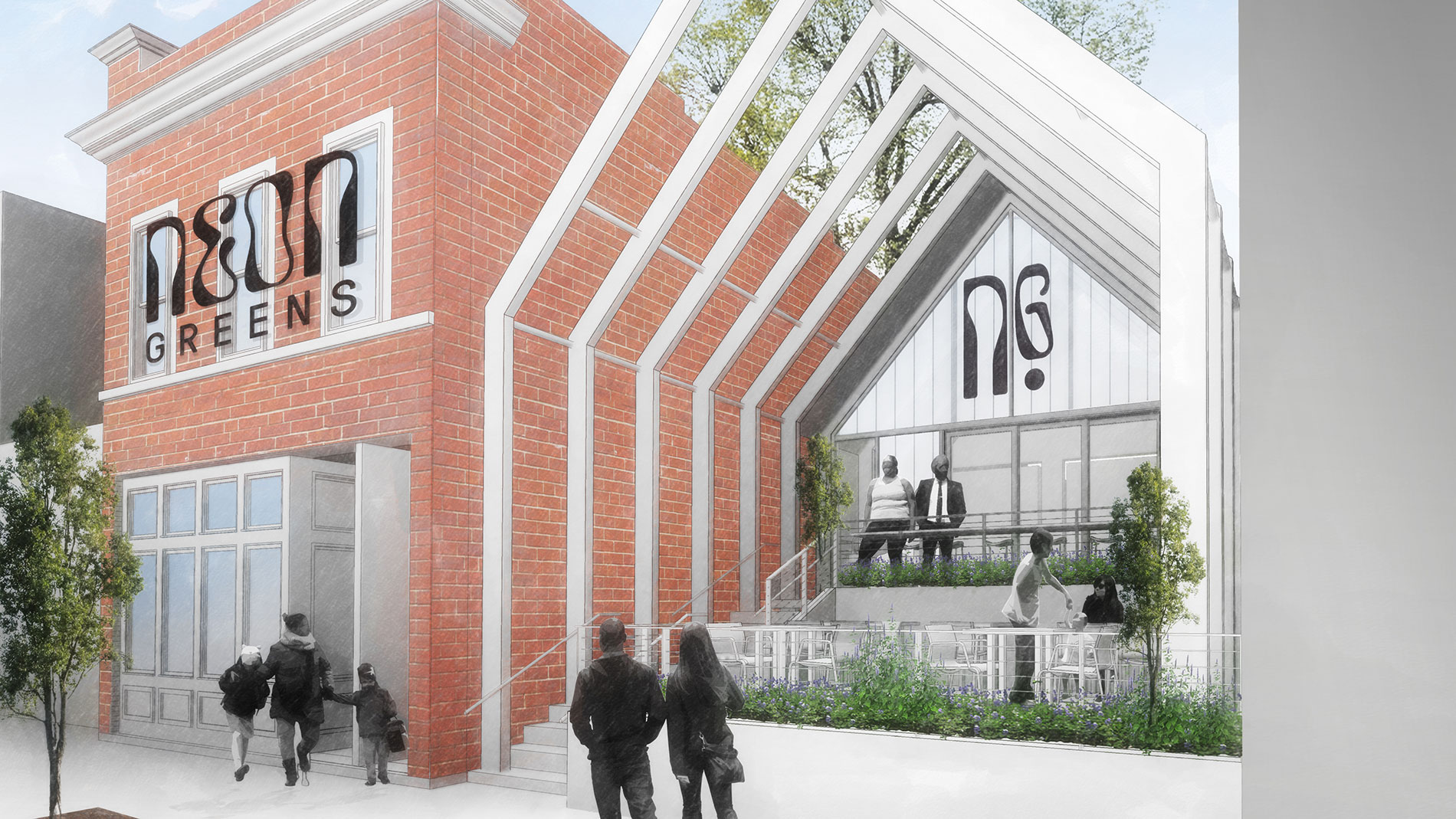 Neon Greens, a quick-service salad bar, will open in the former Rise Coffee House space at 4176 Manchester Ave. in the Grove in summer 2023. The restaurant will serve a range of salads, growing much of its own produce in an adjoining facility.

The restaurant’s salads will feature flavors inspired by global cuisines, with an emphasis on maximizing freshness: Much of Neon Greens’ produce will be grown either on the premises, with additional produce being sourced from small local farms. The menu will include 10 specialty salads, as well as three rotating seasonal salads. Owner Josh Smith said he plans to do tastings over the next month or two to narrow down the specialty salad recipes, but said one he’s excited about is a salad-based take on fried green tomatoes.

“One [of the rotating salads] each season is going to be a cross-collaboration salad, we’re going to partner with a local restaurant, restaurateur or food provider to custom design a salad,” Smith said. There are no further details at present on who those potential collaborators might include.

In addition to the specialty and seasonal salads, customers can also build their own salad from a selection of greens, toppings and dressings, but the menu won’t stop there. Neon Greens will be baking bread in-house, including a take on pao de queijo (Brazilian cheese bread) that will accompany salad orders. There will be two soups: one seasonal, and another dashi-style broth that Smith said will be used to minimize food waste. “We’ll be able to incorporate a lot of the vegetables and other products that are used during the day into that broth,” he said.

Neon Greens will also be making its own soft-serve ice cream flavored with herbs grown on site. “I wanted to have something sweet, because who doesn't want that?” Smith said. “My mind immediately went to matcha of course, because of its green qualities, it's just super refreshing. So we’ll have a matcha soft serve and then we'll have another soft serve which will be an herbal infusion. One season it might be shiso, one season it might be something minty, it could be basil.”

In terms of layout, Smith said Neon Greens will follow a similar footprint to Rise, but with its own distinct design aesthetic. Neon Greens will only use the first floor of the building for customer seating, with the aim to seat around 20 to 22 diners inside. Customers will also be able to dine on the back patio, which will be partially covered, with heaters in use to allow the patio to remain in use for three-and-a-half seasons of the year. On the side of the building, there will be an additional seating area for around 24 customers.

Neon Greens will use that space on the west side of the building to create a 1,200 square foot indoor agricultural facility. Vertical farming methods will be used to grow greens and herbs, with a yield Smith says will be equivalent to that of a six-acre plot of land. The produce will be picked and washed in the facility before being transported – in style – to the restaurant.

“We are actually going to poke a hole in the side of the building, so the greenhouse area will be physically connected to the restaurant space,” Smith said. “We’re planning a fun conveyor belt that essentially will deliver the produce from the greenhouse above the people queueing in line directly to be delivered to the kitchen.”

Smith is originally from St. Louis, but has been based in New York for over a decade, where he has worked as a designer for stage and television. He became interested in growing his own produce while living in a small cabin in the northeast during the pandemic, scaling up quickly from a small hydroponic growing kit to industrial farming equipment.

Smith spent over a year scouting locations in St. Louis before the Rise space became available. “I've been trying to find a home for this project for a long time,” he said. “It just checked all the boxes, and being able to grow into the shoes of an already beloved community institution, it's an honor. I'm excited, and I hope everyone else will be too.”

Neon Greens will be open seven days a week for lunch and dinner. Smith said he is aiming for a summer 2023 opening. Follow the restaurant on Instagram for updates.