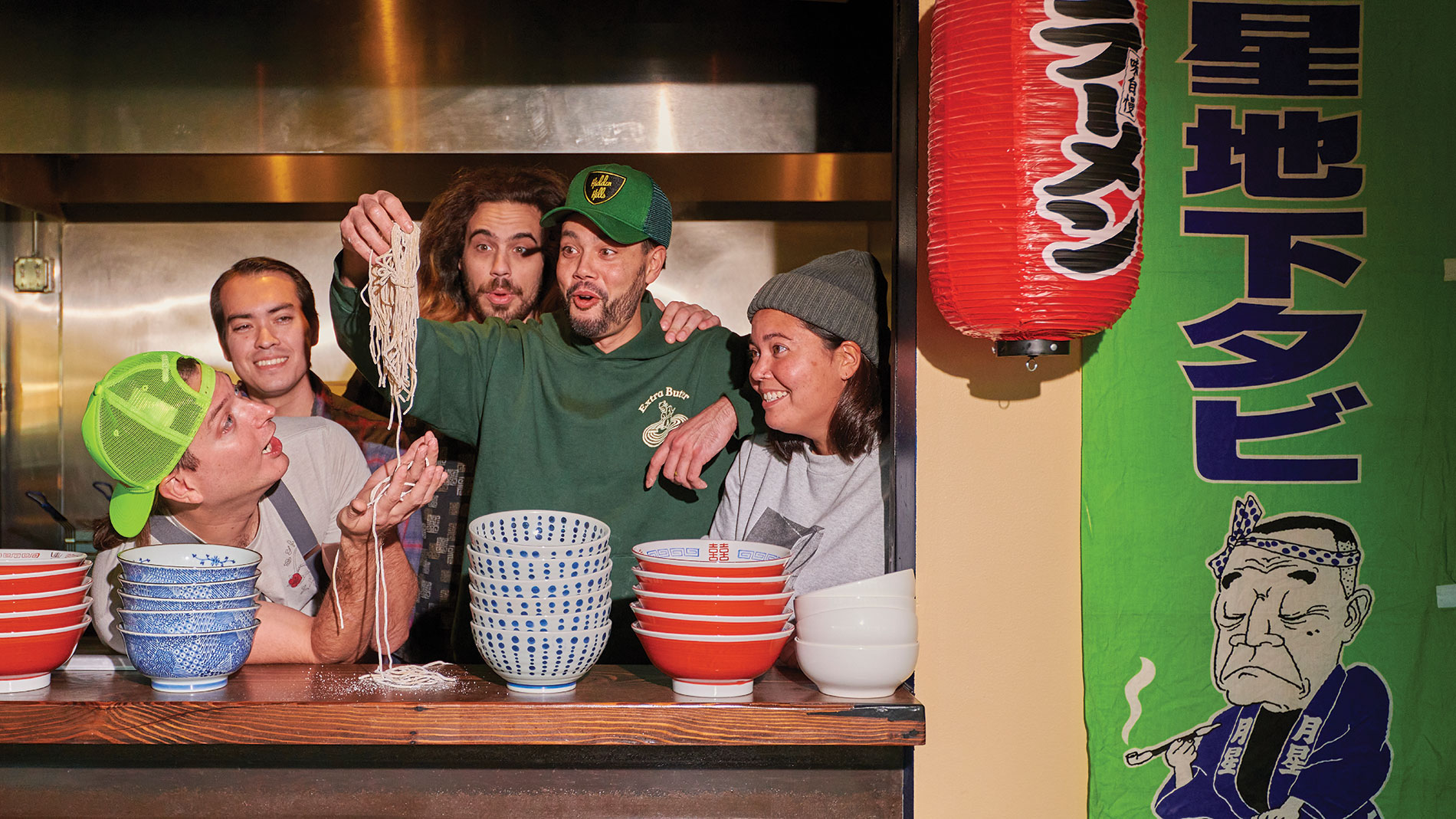 the team at menya rui, the best new restaurant of 2022 photo by greg rannells

Without fail, your arrival at Menya Rui will be greeted within a few seconds by at least one staff member. This might seem like hospitality 101, but after multiple visits you appreciate the intentionality behind the gesture. “We really make it a point to acknowledge everyone as soon as they walk in the door,” said chef-owner Steven Pursley. For Pursley, this is his way of adapting the traditional Japanese greeting of “irasshaimase” to the St. Louis context. “We say, ‘Hi,’ we say, ‘What’s up?’ or if we can't be with you right away, it's like, ‘Hey, we'll be right with you,’” he said.

That consistency and earnestness of execution are a running theme across any meal at this compact noodle shop in Lindenwood Park, habits that sit at the core of everything Menya Rui does. Pursley is understandably comfortable swapping out linguistic niceties, so long as customers receive the same warmth and hospitality purveyed by the kinds of noodle shops where he worked while living in Japan for several years. In the kitchen, however, Pursley has made no such compromise while pursuing his vision for a singularly outstanding noodle shop.

From your first chew-perfect bite of Menya Rui’s noodles, or your first slurp of steamy shoyu ramen broth, it’s evident that the bar has been raised for ramen in St. Louis. Each bowl of shoyu (soy sauce) ramen that arrives at your table is a blend of five distinct components: tare (the base seasoning), stock, aromatic oils, noodles and toppings. Whereas some restaurants use pre-packaged shortcuts, each component of Menya Rui’s ramen is prepared from scratch prior to service. Although he has recently trained a new hire to make noodles, Pursley is still very much the key player pulling the strings in the kitchen. “I do 90% of it,” he said. “I do the prep work, and then I'm here every service night making food, so it's mostly me still.”

“It’s mostly just kind of slow processes,” Pursley said, downplaying the love and care he invests in every component. Preparing the tare involves steeping dried seafood, kombu (kelp), niboshi (dried baby sardines) and shiitake mushrooms in three different types of soy sauce overnight. “Just jam-pack it with umami, and then the next day I’ll bring it up to a boil and strain it off,” Pursley said. “The aromatic oils I’ve got to babysit, it’s actually cooking,” he admits. It’s only at the last minute, when the kitchen receives your order, that the elements are combined, one layered on another until the finishing touches are applied: pork shoulder chashu, seasoned bamboo shoots (menma), chopped scallions, nori (dried seaweed). For enhanced satisfaction, add a soft-boiled egg to your ramen order.

The heart Pursley and his small team, including his sister Erika Pursley, infuse into each bowl of noodles is palpable, no matter what you order. These are dishes that you want to come back to, and it’s to Menya Rui’s credit that you can form an intimate relationship with this menu in relatively short time. This restaurant is great at what it does, but one of the restaurant’s strengths is also its confidence in restraint. Just three or four visits is enough to take a tour from shoyu ramen to spicy tantanmen, the tsukemen – thick-cut noodles for dipping into a scallop broth – and on to the brothless aburasoba ramen. Inevitably, you’ll come full circle and start over. Currently, there are no vegetarian or vegan options. Pursley plans to add a miso ramen over the winter, but only when he feels he’s got it right.

All this takes place in a setting strikingly redolent of the noodle shops Pursley loved during his time in Japan. At busy times, a line of eager customers forms outside, like a Tokyo lunch hour. On the other side of the door, diners huddle at the counter or side by side at shared tables. The walls are decorated with retro Japanese signage and a mix of vinyl record covers featuring American and Japanese pop stars of eras gone by. The background playlist alternates jazz and mid-century Japanese pop. The music is perhaps the one aspect of the restaurant for which Pursley has willingly abdicated responsibility. “Erika, my sister, is in charge of that,” he laughed, admitting his own musical selections had been less well received by diners in the early days.

There are restaurants on this list that do more than Menya Rui, but what Pursley and his team have created is remarkable in multiple ways. Theirs is a restaurant that is clear in its identity, passionate and proud in its craft, and rigorously on point in its execution. It’s the realization of a dream that Pursley prepared for patiently, learning how to do it right, then fine-tuning some more. And it’s a restaurant that does what it does so well that it almost feels like we’ve never had something quite like it before in St. Louis. That’s why Menya Rui is our best new restaurant of 2022.