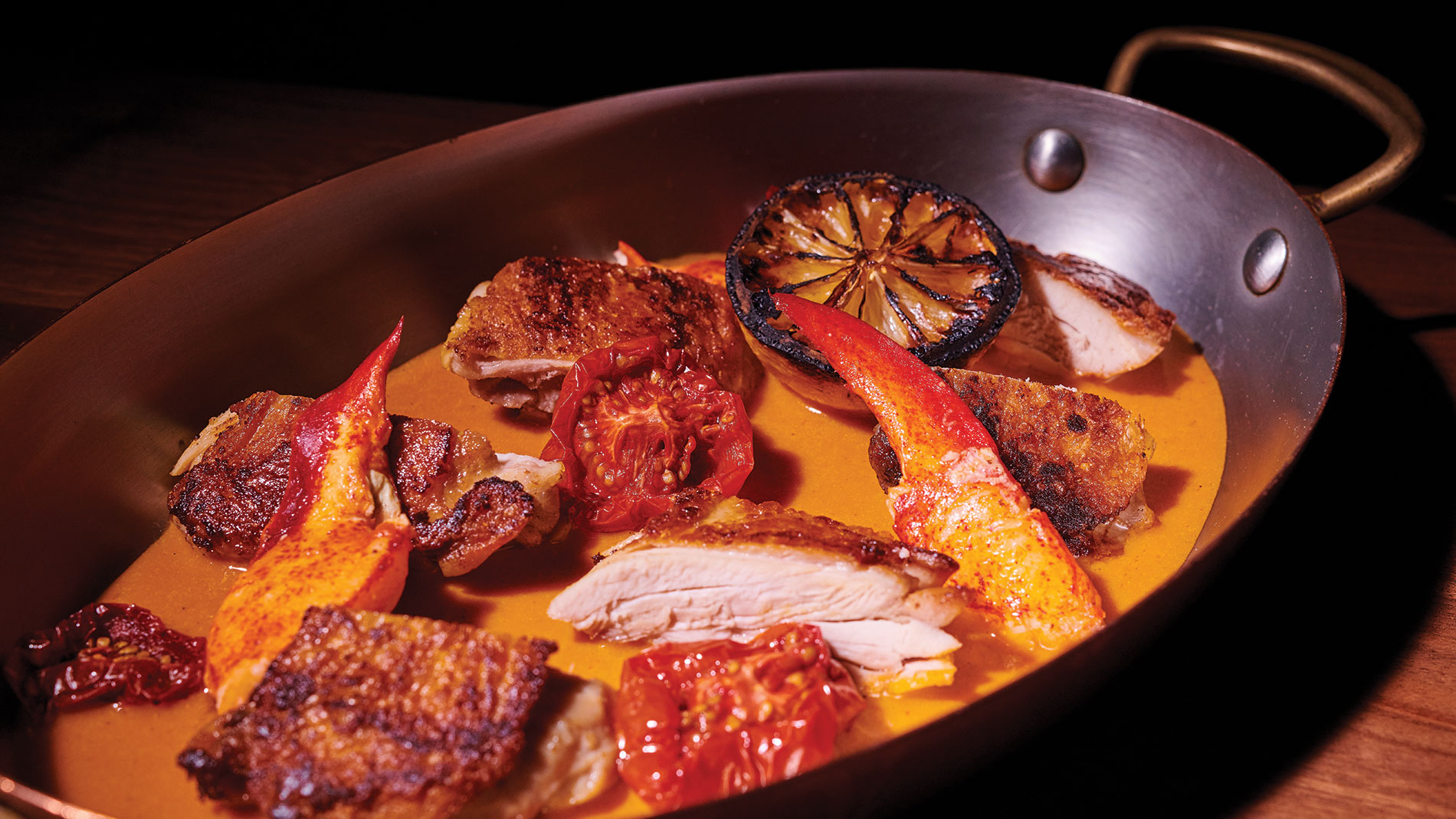 For the past 10 years, restaurateur Ben Poremba has provided St. Louis’ diners a culinary tour of the Mediterranean, with twin restaurants Olio and Elaia, informed by Poremba’s Israeli background, and with The Benevolent King, inspired by his mother’s Moroccan roots. The trip’s latest installment, Bar Moro, ferries us across the Strait of Gibraltar, the narrow waterway that divides northern Africa from the Iberian Peninsula, to Spain and Portugal.

Poremba is equal parts curator and chef, as demonstrated by the bespoke inventory at his shop, AO&Co., and his restaurants’ interiors, where every design element shows careful consideration. At Bar Moro, this curatorial touch is visible not only in the restaurant’s decor, but also in the menu itself, which reflects Poremba’s appreciation of the region’s fine ingredients and deep knowledge of its culinary history and traditions.

MAR I MUNTANYA
“Mar i muntanya” translates to “sea and mountain” in Spanish, a nod to the dish’s traditional blend of meat and seafood. Poremba is quick to clarify that Bar Moro’s version is not exactly authentic, however. “Traditionally, it’s just basically a stew that has all these different ingredients” – rabbit, sausage, shellfish, whatever’s on hand. Bar Moro’s version features chicken thighs, which they confit and then crisp just before serving, while housemade shrimp stock and lobster, seasoned with piquillo pepper, saffron and other aromatics, provide notes of the sea.

JAMON IBERICO
According to Poremba, jamon (Spanish dry-cured ham), is both like and unlike its Italian cousin, prosciutto. “Prosciutto is meant to be eaten sliced thin, the color of it is peachy, it’s a lot creamier and sweeter,” he explained. “Jamon is supposed to be hand sliced into smaller, thicker pieces. It has a little bit of a chew, it's much nuttier and earthier and richer” – a result, in part, of the pigs from which it’s made being fed on acorns.

CONSERVAS
Bar Moro’s extensive selection of conservas – tinned, high-quality seafood that the restaurant serves in-can – are a revelation. “The canneries that you find in Portugal and Spain … understand that there is this benefit of minimally processing those things and preserving them in such a way where they really retain the freshness and the flavor that otherwise you can’t get,” Poremba explained. “I went to great lengths to curate a list of those things, with what I think were the best producers, the best representation that I can get in town.”

GAMBAS
Shrimp (gambas) show up in several places on the Bar Moro menu, but the simply prepared gambas al ajillo, sharp from garlic and cooked in sherry, is our favorite. The shrimp are delivered live daily from Triple J Farms, an aquaponic shrimp farm based in Foristell, Missouri. “Obviously these are not wild shrimp that were just caught. But you get the closest to the experience that you get in Spain and in the Mediterranean, because they’re alive when we get them.”

ARROZ NEGRO CREMOSO
Due to the small scale of Bar Moro’s kitchen, you won’t find paella regularly featured on the menu; “to do paella right, you have to cook it to order, and we don't have the real estate,” Poremba said. (He hopes to eventually do one-off paella-only nights). Knowing he wanted to have a rice dish on their regular menu, he turned to a black rice dish he’d done previously at Elaia, where the rice breaks down to a creamy, almost grits-like texture. “It just makes sense that I'd bring in a little bit of those paella flavors, so the squid ink, a little bit of chorizo, braised octopus and that sort of thing.”


BASQUE CHEESECAKE
Bar Moro’s Basque cheesecake is the restaurant’s rare, technique-driven dish, one that’s more happy accident than tradition. Due to the limited kitchen space, Poremba borrowed a Japanese technique in which the cheesecake is first steamed and then browned in an oven. “The original idea was to keep it cold. But I was so impatient, I just ate it the minute it came out of the oven, and I'm like, ‘Oh my God, I'm on to something here,’” he recalled. He’s the first to admit that it’s not really a cheesecake – it’s served hot and the texture is closer to a souffle – but it’s so good, there’s no reason to split hairs.

SHERRY + VERMOUTH
Bar Moro’s robust selection of sherries and vermouths reflect Poremba’s “personal obsession” with vermouth and wine director Luciano Racca’s extensive research on sherry, which involved traveling to Spain. “We wanted to have both breadth, so allowing different styles of sherry, but also depth, so having more than one representation of what [sherry] is,” Poremba noted. “Sherry runs the gamut of being very dry to being very sweet. Because it has high acidity and a really nice, dry finish on the dry ones, it lends itself to all kinds of foods pretty beautifully.” The same is true of vermouth, which also features herbaceous and botanical notes, he said.