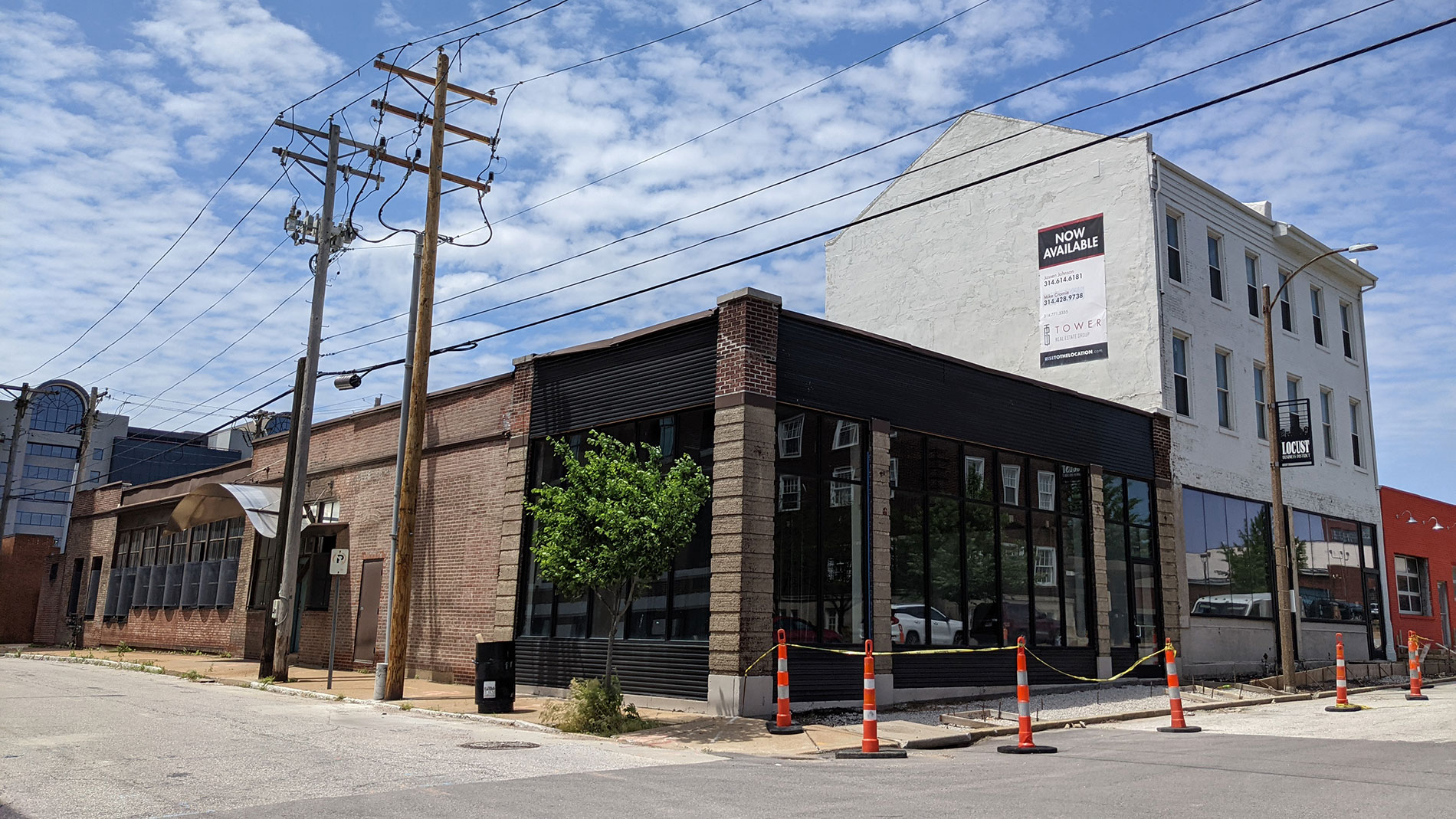 The JC Midtown development at 2700 Locust St. is heating up, with five new food and drink concepts set to open in the area between June and September this year.

The restaurants are adjacent to the Malone apartment development (2650 Locust St.), whose 75 residential units are revitalizing the former Beaumont Telephone Exchange Building, which lay empty for over three decades. Four of the new venues – Nexus Cultural Cuisine and Craft Cocktails, Videira Wine Shop & Bar, Kain Tayo and Anita Café and Bar – will be located at 2700 Locust St. A fifth venue – Rick’s and Rick’s Rooftop – will operate out of a standalone building just east of the Malone at 2639 Locust St.. Developer Tower Real Estate Group also has plans to bring in another venue at 2710 Locust St., saying in a press release that they’re currently “negotiating with a soccer bar and a microbrewery.”

Tower Real Estate Group owner Jassen Johnson said JC Midtown is a key part of his company’s broader effort to regenerate the “Midtown Alley” stretch between Downtown and Grand Center. “When you think about why do you go to other successful neighborhoods, like the West End or whatever, it's because it has the wine bar, the coffee house, the curated cocktails, and so those are specifically the venues that we’ve been trying to recruit,” Johnson said. “We feel very comfortable and very excited about the people that we've lined up – their track records, backgrounds and their own spins on how they think that their venues are going to be successful here.”

Here’s a look at each of the five venues that have been confirmed so far.

Ceaira “Chef Jack” Jackson and Misha Sampson are bringing flavors from around the world together at Nexus, which will be open initially for dinner service only at JC Midtown. The restaurant will feature high ceilings and windows inviting natural light to pour in, and will also offer a patio with an herb garden.

“Chef Jack's great at naming things, so she came up with the name Nexus – it literally means the center, the meeting place,” said Sampson. “We're saying it's like the comfort food from all types of cuisines. Sometimes you don't want to go to a particular cuisine, because you don't want only that cuisine. With us, it's going to be tapas-style, so you can come and get something from New Orleans, something from Asia, something from Mexico.”

The menu will reflect Chef Jack’s relentless curiosity to update traditional dishes and blend influences from different cuisines. Examples of how she’ll be doing that at Nexus include dishes like Sichuan chicken and almond waffles, short ribs and grits, duck Rangoon and a jerk lamb burger. Jackson is also bringing plant-based cuisine to the fore, as well as using top produce from local farmers, bakers and cheese makers.

“I did this black-eyed pea hummus [with okra chips]” Jackson said. “The flavors are just so dynamic, and I'm really excited about that one. Even if you don't like black-eyed peas, the way I'm doing it is just introducing people to Mediterranean and Southern food, just marrying the two. So when you take a bite of that, it's just amazing flavors that you never even knew you needed.”

The drink list will offer natural wines, Japanese whiskey highballs, fruit-forward mimosas, local spirits infused with herbs grown in-house, low- and no-ABV coffee drinks and more. Misha Sampson said Nexus will also take pride in serving updates on classic cocktails. “Tweaking the ingredients a little bit, or tweaking the presentation,” Sampson said. “Maybe you're used to it in this glass, and it’ll be in this other glass, but we still want people to be comfortable.”

Fronted by Mykel McIntosh and Marshall Darwish, Videira will combine a retail space with a bar area where guests can drink cocktails, wines and liquor. They’ll have a list of classic cocktails (Manhattan, Aviation, Sidecar) and their own signatures, which are named after Hollywood icons of yesteryear. The Marilyn (rye whiskey, Benedictine and yellow Chartreuse), the Diahann (gin, simple syrup, lime juice, lemon juice and mint), and the Shirley (rum, sweet vermouth, grenadine, lime juice, Angostura and lime) are just a few examples of what you can expect from Videira’s cocktail list.

“The ingredients and type of spirits we’re going to use are going to be upscale,” said McIntosh. However, she said Videira’s cocktails will likely be priced competitively, at around $10 to $15. “We’re not going to make it too crazy,” McIntosh said.

Customers will be able to try wines before committing to taking one home, and the wines will be sold at retail price for to-go customers. McIntosh said it’s important for customers to be able to engage with the wines and get a feel for a bottle before they buy. “I want to have [the wine] front-facing so people can actually touch it and look at it,” she added.

The offerings will be rounded out by small plates, including cheeses (also available to take home), charcuterie boards and more. McIntosh formerly worked at SoHo Restaurant + Lounge, and also did a stint working with Nexus’ Chef Jack and Misha Sampson at Bait.

Having already built a following with their first location in Trenton, IL, owners Randy and Sally Arcega are now looking forward to bringing Kain Tayo’s Filipino cuisine to the city. The new restaurant at JC Midtown will be three times larger than their Trenton location, which has closed so the Arcegas can switch their focus to St. Louis.

The Kain Tayo team believe St. Louis diners are hungry for authentic Filipino food. Kain Tayo will offer dishes like chicken adobo (chicken marinated in soy sauce, vinegar, peppercorns and garlic), pancit bihon (stir-fried noodles with pork and chicken) and sisig (crispy chicken and pork hash seasoned with lemon, onions and chile peppers). Randy Arcega said another popular dish with customers is the lumpiang Shanghai: “It’s kind of like an egg roll, but with different ingredients – it’s filled with ground pork and vegetables,” he said. “It just melts in your mouth.”

Owner Anita Abdul-Karim said the concept for her cafe and bar began in search of “an energy and a space and a vibe” – an attempt to capture everything that’s special about getting together with friends or family over a morning coffee. In doing so, and in building out a menu to serve that goal, she found herself taking cues from her Lebanese background. “I didn't have a huge intention to make a ‘Middle Eastern’ cafe,” Abdul-Karim said. “It just naturally happened with the flavors when I was building the menu. Those were the things that came out.”

Anita Café and Bar will offer “carefully curated Mediterranean-style beverages and food,” with drinks including Middle Eastern coffee and rose coffee. The food menu will include a few savory and sweet open-face toast options – zaatar toast, and Anita’s take on avocado toast. “You’re just going to have to come by and see for yourself,” she said. There will also be traditional Middle Eastern breakfast items include foul (pronounced “fool”) – a mix of fava beans and garbanzo beans with garlic and seasoning – and fatteh (garbanzo beans and sesame seeds butter or tahini, topped with vegetables).

Abdul-Karim said she also draws inspiration from what’s known as sobhiyeh in Lebanon. “Sobhiyeh is when you wake up and whoever’s in the house, you kind of touch base, exchange a prayer,” she said. “It’s like a blessing to the rest of your day, a moment where you sit down and have a space with somebody. It’s like a combination of meditation and a get-together and a brunch mixed in one.” To that end, Anita will offer beverage options served for communal consumption – a French press to be shared, for example.

The liquor program will feature cocktails like a charcoal espresso martini, green lemonade mojito and an orange blossom mimosa. Intitially, Anita Café will be open during the daytime, but Abdul-Karim said she hopes to work up to being able to open in the evenings.

Farther down the street at 2639 Locust St. will be Rick’s and Rick’s Rooftop, an “entertainment/music venue” with a full-service bar along with four duckpin bowling alleys, pinball machines and other games including foosball and bocce ball. A food truck will be located inside the venue – owner Jeff Birmes said Rick’s is currently in talks with a well-known (“one of the top five in St. Louis,” he said) food truck to come on board to manage all food operations.

Rick’s will also serve as a live music venue hosting national touring bands as well as local acts. The stage will be upstairs on the roof, with a bar built inside a shipping container. “Capacity is a little above the Duck Room at Blueberry Hill, a little less than the Delmar Hall, more than Off Broadway,” Birmes said. He added that the venue will be kitted out with state of the art sound equipment to deliver a great all-around experience for guests attending shows. “When I’m leaving the soccer game, I want to be able to see lights and hear sound and people will be like, ‘What the hell’s going on around the corner?’” Birmes said. “I want that environment.”

Behind the bar, customers will find locally brewed beers, wine and mixed drinks, including canned cocktails. “We might have five signature drinks,” Birmes said.

With a significant buildout ahead, Birmes said Rick’s is looking at a March 2023 launch.