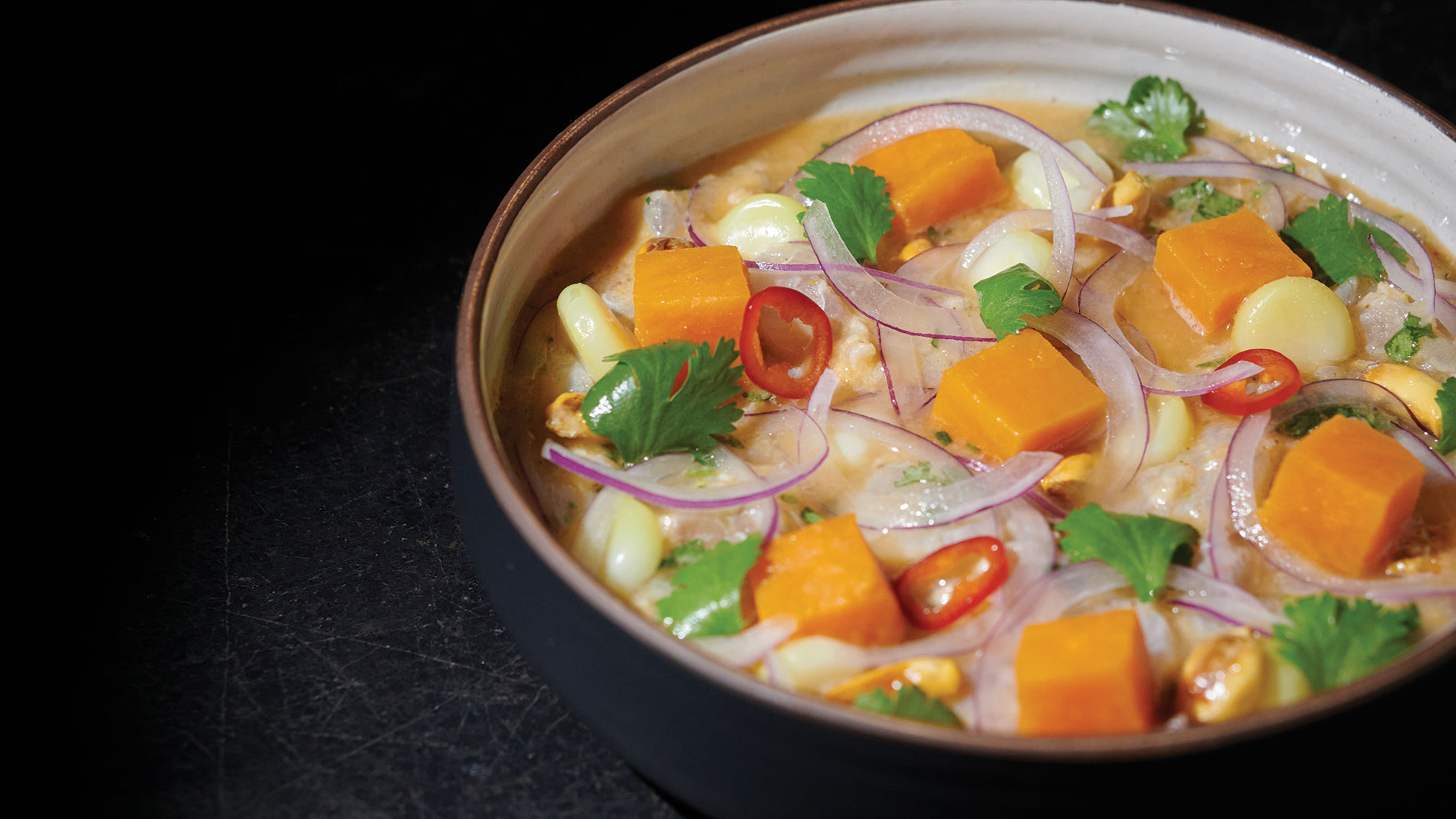 classic ceviche with flounder at jalea in st. charles photo by greg rannells

The night began, as it always does at Jalea, with a little ramekin of cancha to mindlessly snack on while perusing the menu. These large, pan-roasted Peruvian corn kernels pop from the inside out, making them crunchy on the outside and soft on the inside; they’re as addictive as commercial Corn Nuts minus the fear of shattering a tooth. I could spend an afternoon munching handfuls of cancha while sipping easy-drinking Pisco sours, which exemplifies the spirit and relaxed feeling of Jalea.

Siblings Andrew Enrique and Samantha “Mimi” Cisneros (he runs the kitchen while she handles operations) opened their Peruvian bistro in December, on the cobblestoned Main Street of downtown St. Charles in a cozy, brick-walled space once home to The Red Sun sushi restaurant.

Jalea may be 29-year-old Andrew Cisneros’ first outing as a chef-owner, but he’s already amassed an impressive resume, from bussing tables and cooking at Jim Edmond’s 15 Steakhouse while in culinary school to lending a hand at Mike Randolph’s short-lived Original J’s Tex-Mex Barbecue. In between, Cisneros honed his skills at the St. Louis Club and The Copper Pig before cooking at some of St. Louis’s finest restaurants: Randolph’s Privado, Ben Poremba’s Elaia and Gerard Craft’s Dia’s Room at Cinder House. He even spent a year on Amelia Island, Florida, at the Ritz-Carlton’s upscale Salt restaurant. Featured on Sauce’s 2021 Ones to Watch list, Cisneros had the chops and experience to branch out on his own.

Born and raised in St. Louis, Cisneros was exposed to the traditional food of his parents’ home country through his mother and grandmother. “I was spoiled,” he said. “My mom is a great cook and cooked different dishes for me. It was a blessing.” As he got older, he become more curious about the art and technique of cooking Peruvian food. Even in high school when he was doing culinary competitions, he was always asking questions. “I grew up having all this food, but I didn’t know how to prepare it,” he continued. As a chef in training, he would ask his mother and grandmother how they made dishes like tripe stew or lomo saltado.

Despite the family recipes, the lomo saltado at Jalea isn’t his mother’s or grandmother’s. Traditionally a juicy dish of thin beef strips, red onions, tomatoes, soy sauce, aji amarillo (yellow chiles) and french fries served with rice, Cisneros’ version was upgraded to sliced rib-eye steak and swapped out fries for fingerling potatoes cooked in beef fat, all glistening in a reduction sauce so dark and fragrant that it should be bottled and sold everywhere.

“After 10 years of cooking, I took those traditional recipes and found a way to make them my own, elevate them and go an extra step further and give them more love than they already had,” he said. “My mom didn’t have time to make a 16-hour veal stock after work, so that was when I started thinking that if I’m going to have a lomo saltado, we’re not going to buy Knorr cubes and crush them up and mix them with water. We’re cooks, we’re chefs, and we’re going to make veal stock as a base, and make a chicken stock, and fish and shellfish stock for ceviches.”

Cisneros said he wanted to take all his training to make the best and most natural product possible. “We have this incredible restaurant and this opportunity to make amazing food. We don’t want to take shortcuts when we have all this time and talent in the kitchen.” Cisneros’ take on another Peruvian favorite, carapulcra, is equally impressive. Here, three meaty hunks of braised pork belly sit atop garlic rice and a stew of bacon and sun-dried potatoes accented with a salsa of slivered red onion and mint leaves.

Mimi’s husband, M.J. Guliyev, is Jalea’s front-of-house manager; he also runs the bar program, where you can expect a broad selection of craft beers, several low-intervention wines, a couple of excellent Pisco-based cocktails, and alcohol-free beverages including Inca Kola, Peru’s iconic, bright yellow lemon-verbena soda. In the future, Cisneros said to expect other cocktails made with the purple corn lemonade they make in-house and even a Pisco margarita.

Soon you’ll also find pollo a la brasa, Peru’s iconic, insanely delicious wood-roasted rotisserie chicken that Cisneros perfected while tinkering with recipes while at Original J’s and prototyping the concept with Ben Poremba at his AO&Co. Market. According Cisneros, they hope to offer it as a weekly chicken-and-beer special starting this month. “We still have all the equipment, but the kitchen is too small to hold it all, so we’ll be using the back patio,” he said.

Despite having been open only a few months, Jalea is already drawing diners from all over the metro area and beyond. On a recent Saturday night, I overheard the young daughter of a large Peruvian family visiting from Kansas comment, “This is definitely flavor you don’t get back home.” Not in Kansas – or anywhere else, for that matter.