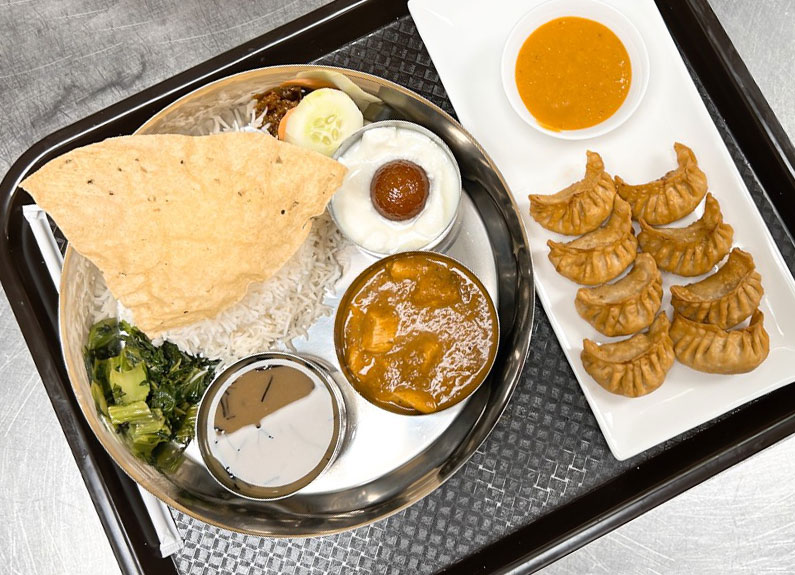 The restaurant has been a longtime goal for owner Arzun Chuhan. “I’ve been planning to open a restaurant for five years, and, finally, in 2021, it’s happening,” he said. Namaste has become a business for the whole Chuhan family now, with family members helping in the kitchen, working as servers and whatever else needs to be done. This is the first restaurant they have opened.

The menu focuses on making sure all dishes are traditional to the cuisine. There is some Indian food, such as chicken tikka masala and samosas, but the main focus is on Nepalese dishes. “My favorite is the mutton thali, which comes with rice, curry, meat, vegetables, soup and salad. It has it all,” said Chuhan. “It’s my mom’s recipe.”

The restaurant also has a full bar that will be open soon. They are waiting on a liquor license and a bartender. There will be some imported Indian and Nepalese beers, but the other offerings will be pretty standard, including wine and cocktails.

Namaste took over the former Giancarlo’s Ristorante space. It spans almost 3,000 square feet and was completely renovated over the course of many months. The restaurant can seat 80 people. “It’s totally new – TV screens on every wall, black and white décor,” said Chuhan.

Namaste is open for lunch and dinner Tuesday through Sunday.