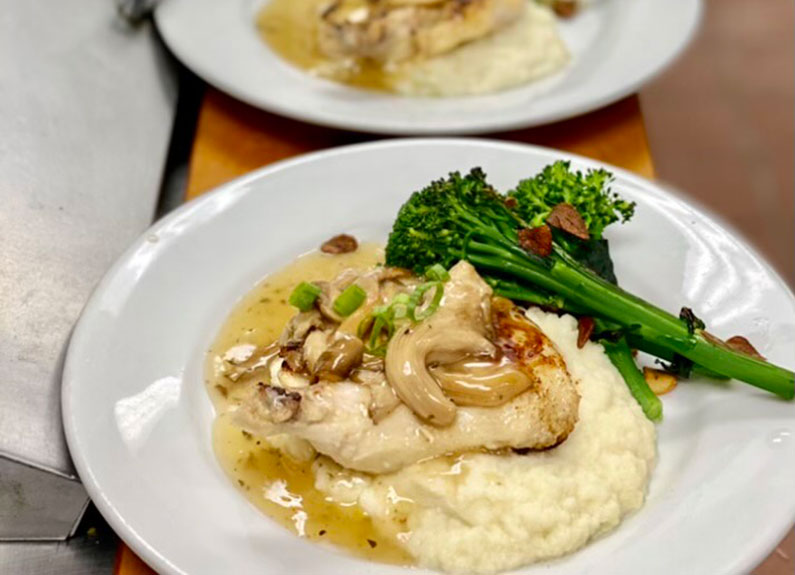 Timothy’s The Restaurant will open in Creve Coeur in August

Early next month, Creve Coeur will become home to a brand new American fine dining restaurant when Timothy’s The Restaurant opens at 12710 Olive Blvd., in the old Olive Street Cafe space. The Restaurant will be owned by Tim Metz and Sean Olson, who also own popular local sandwich chain Pickles Deli. This will be the first full-service brick-and-mortar from the team.

Metz said that the idea to open a restaurant came from friend Steven Manns, who previously worked at Herbie’s and Akar. “He approached us two years ago and he just said to us, ‘You know what we should do? We should open a restaurant,” Metz explained. “We said we’d agree to it if we found the perfect space.” After a brief search, they realized that Olive Street Cafe was vacant and jumped on the opportunity. “We investigated the space and fell in love with it,” Metz said. “It needed a lot of work, but it’s all coming together now.”

Timothy’s menu will be upscale American, according to Metz, who had originally conceived of it as an elevated comfort food spot. “When I tell people that, people were thinking, like, fried chicken or shrimp and grips, upgraded somehow,” he said. “We’ve got curried mussels on the menu, we’ve got a cheese-stuffed tater tot that’s just delicious.” Other potential menu items include a puff pastry dish, a steak dish and house-made pastas; Metz added that there will be a strong presence of vegetarian and vegan dishes. Desserts will be made in-house, including an array of frozen treats. “I love making ice cream,” Metz said. “It’s one of my passions.”

Manns will be running the beverage program, which Metz believes will have 150 to 200 bottles of wine. “He’s very French-heavy when it comes to wines and what he likes,” Metz pointed out, adding that there will be a wide variety of non-French wines available as well. Classic cocktails will also be part of the game, with mocktails sourced from local cocktail syrup producer Pour-Fections.

Metz said Timothy’s aims to be open Tuesday through Thursday from 4 to 10 p.m., and Friday and Saturday from 4 to 11 p.m. “We know we’re going to end up extending our hours, possibly opening for lunch, Saturday and Sunday brunch,” Metz said. “For now, we’re just trying to get our feet wet.”