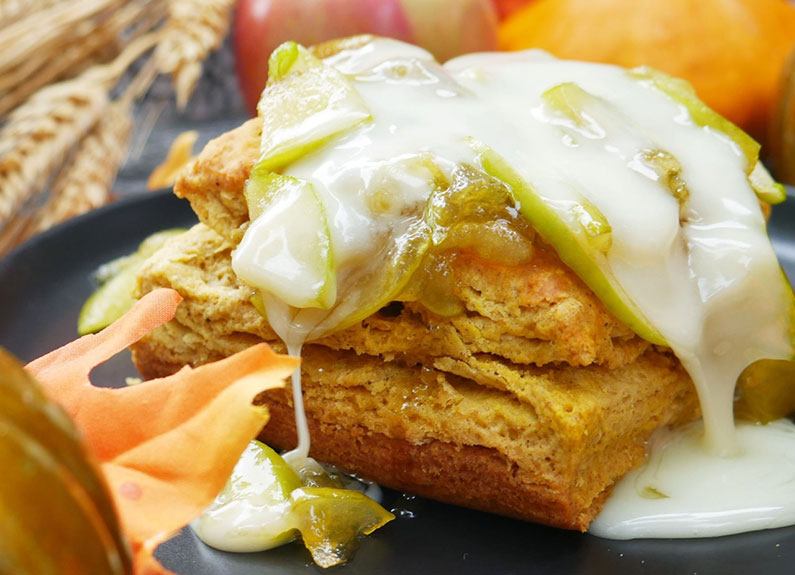 What started as a leap of faith has turned into a successful business and upcoming food truck for married couple Meredith and Mike Shadwick. Honey Bee's Biscuits + Good Eats sells biscuits and gravy among many other variations of the traditional dish.

Sold at the Kirkwood Farmers’ Market from June until last weekend when the market closed for the season, Honey Bees offers sandwiches, gravies, honey-glazed biscuits, whole wheat and rosemary biscuits, alongside creative spins on the traditional biscuits and gravy, including pumpkin spice and s’mores offerings. The food truck is slated to launch next month, but the duo is offering weekly delivery in the meantime with ordering available online.

After a longtime career in sales, Mike Shadwick landed his dream job at Winslow's Table in University City in February 2020 and worked there until March when the pandemic hit. It was then the idea for Honey Bees came about. “It all came together pretty quickly from the time [Mike] first introduced our friends and family to [his] biscuits and gravy,” Meredith Shadwick said.

The name for Honey Bee's derives from three parts: the honey glaze on top of the biscuits, the two met on the dating app Bumble (which has the logo of a bee), and their belief to “bee” yourself. “I don’t know who said it, or how it came up,” Mike Shadwick said. “But it was like, ‘Honey bees! That could be the name of our company!’”

The idea for a food truck came after a successful season at the farmers market. “Markets were perfect this summer,” said Mike Shadwick. “We didn't know we were going to get so lucky.”

The couple hopes to debut their food truck in mid- to late January 2021, and will park it around town at spots like the food truck venue 9 Mile Garden, as well as other events and at the Kirkwood Farmers’ Market. The menu will be relatively the same, though the market booth may have more creative items when it reopens in the spring. “We would like to use the market as our test site to try out new items and see if they would work for the food truck,” Mike Shadwick said.