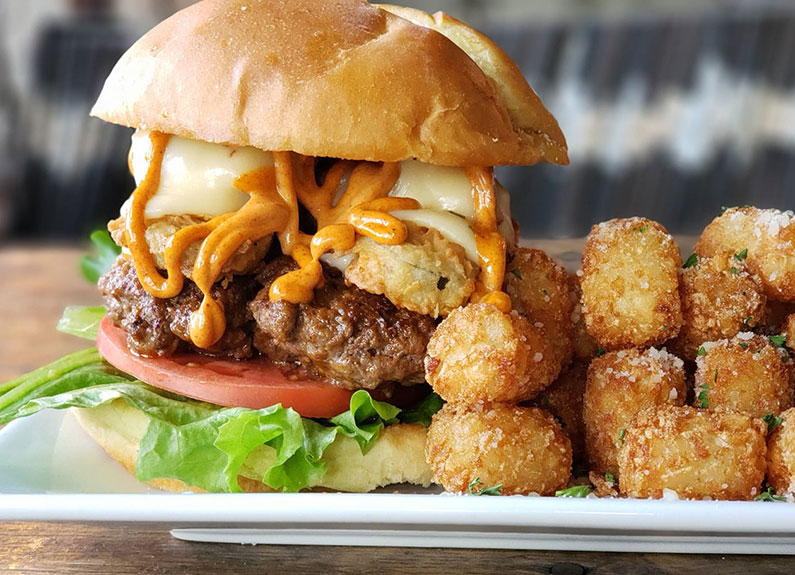 Ghost kitchen B.A.B.S. A Go-Go opens at Sanctuaria in the Grove

The year 2020 will likely be remembered as (among other things) the year of the ghost kitchen. The newest concept in this trend is B.A.B.S. (Bad-Ass Burgers and Stuff) A Go-Go, which has opened inside Sanctuaria at 4198 Manchester Ave. in the Grove. Serving up burgers, wings, fries and more, the kitchen aims to show off another side of the beloved bar.

Owner Stephen Laws explained that after buying Sanctuaria in 2019 and relocating Diablitos Cantina to the Central West End, he wanted to start something new. “There’s so many cool things we can do out of this kitchen. We pulled the Mexican food out, which gave it more room to breathe,” he said. “We were like, ‘Hey, this is a perfect opportunity to open this as a ghost kitchen.’”

But unlike some of the other ghost kitchens popping up, B.A.B.S. A Go-Go is something Laws had planned before Covid-19 hit. “It was something we wanted to do all along,” he said. “It’s a revolving burger menu and other things, like loaded tater tots and seasoned mozzarella sticks.”

On that note, the menu comprises about eight burgers, including a classic bacon-cheeseburger, the Inconceivable! Burger (a veggie burger) and the Too Gouda Be True, which features a burger topped with a quarter pound of bacon and melted Gouda cheese. The Flamin’ Rooster is smothered in Laws’ house-made wing sauce. “It’s my own recipe for the buffalo sauce. I’m super proud of it,” he said. “It’s got a great heat to it – it carries with you and gives you a warm hug all the way through. You know it was there.”

The concept is open Tuesday through Sunday from noon to 9 p.m., and customers can order via the website for pickup or through Grubhub, Postmates, DoorDash and eventually Uber Eats for delivery.