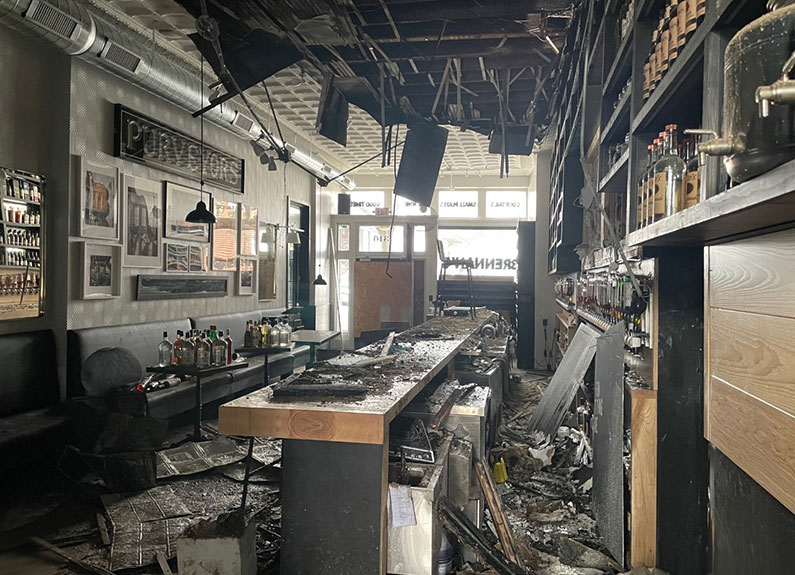 brennan's in the central west end photo by allyson mace

Brennan’s, which was due to reopen tonight, Thursday, Dec. 3, in its new home at 316 N. Euclid Ave. in the Central West End, has suffered extensive damage from a fire that happened early this morning. The bar had previously closed its doors at 4695 Maryland Ave. location late last year, where it had spent the past 17 years. Owner Kevin Brennan confirmed that nobody was hurt in the fire.

“There were people in the building, because it’s part residential. Fortunately, nobody was injured – that was the main thing. I got a call this morning at 6:30 in regard to a security alarm,” Brennan explained. The police drove by the space and discovered the fire, which was put out shortly after.

The cause of the fire is unknown; Brennan said the fire marshal will complete his report Friday, Dec. 4. After that, an insurance consultation will determine what rebuilding the space will look like. In spite of the collision of the fire with the end of an almost year-long buildout, Brennan said they’ll start working again soon to reverse the damages. “Ironically, we were supposed to reopen tonight,” Brennan said. “So, it’s back to rebuilding it again, which has been reasonably tough, considering we just went eight-and-a-half months with everything that’s going on. It’s going to take a few months.”

The fire happened on the bar side of the first floor; next door is a lounge area that was largely spared. Much of the bar’s inventory remains intact, according to Brennan, including goods and products in the cigar lounge upstairs. “It wasn’t so much of the contents, but it was some of the structure of the building,” he elaborated. “We’ve got a lot of people’s stuff in the form of humidors and cigars, for our cigar club. There weren’t a lot of personal items destroyed.”

Otherwise, as previously reported, the space aimed to offer around 125 spirits, 40 beers and about 50 wines. The main room comprised a series of spirit taps, a long white ash bar, 12 suede chairs and a few tables with banquette seating.

To support Brennan's during this difficult time, place an order on its online delivery service boozeandsnacks.com beginning Monday, Dec. 7.

The former bar Ryder’s Tavern at 4123 Chippewa St. in St. Louis has been rebranded into ...

The Angad Arts Hotel​ in St. Louis recently announced that chef Matthew Birkenmeier has taken over ...