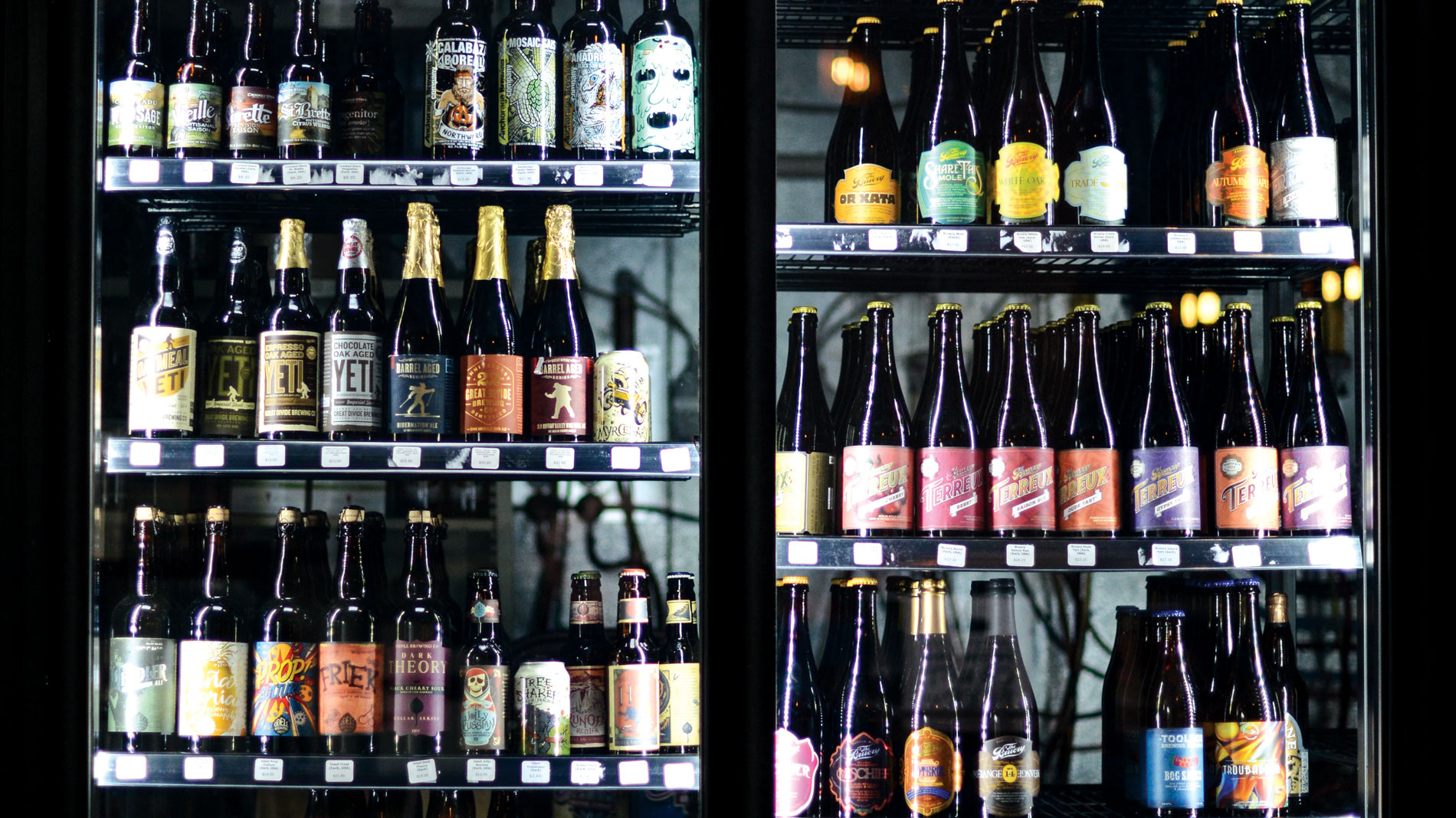 Unless you’re an expert, chances are that when you walk into a place like Gezellig, you feel overwhelmed by the vast selection of local, domestic and international beers and ciders. That’s OK – we’ve all been there. Sometimes you just have to ask for a recommendation, which we went ahead and did for you. Here’s owner Brandon Cavanagh on seven cans and bottles you need to know about.

Off Color Brewing Tooth & Claw
“Off Color is out of the Chicago area, and Tooth & Claw is a dry-hopped lager. [It’s brewed for] the Field Museum up in Chicago – that’s why the dinosaur’s on it. It came out in these 16-ounce cans, which is a perfect format for this beer. It’s super crushable, easy drinking. It’s a great beer anytime of year, but for spring and summer, it’s an incredible go-to.”

Prairie Artisan Ales Funky Gold Mosaic
“This is another ‘spring beer.’ It’s a dry-hopped sour. It’s a fantastic beer. Slightly funky, slightly tart with this nice tropical hop presence. This used to be available pretty regularly in bottles, and I haven’t seen it in a couple years. It just came back in this fantastic can art. I’m really happy to have this beer back, and I’m really hoping that it stays around.”

Strange Roots Experimental Ales Vermu’t
“What they do is wild ales, and everything I’ve had from them has been absolutely incredible. This is certainly the star for me. It’s a vermouth barrel-aged sour. This is a little more obscure – relatively new to the market, like in the last six months or so. Maybe a little bit of a cop-out, but I’d say anything you see from these guys, grab it. Incredible brewery and something not a lot of people know. But they should.”

Lindemans Cuvée René Oude Gueuze
“It’s a classic gueuze, [a Belgian beer made by combining older and a younger lambics, then bottle fermenting the blend]. Highly carbonated, bone dry and super funky, it’s a really wonderful beer that’s available most of the year. Most people know Lindemans for their back-sweetened lambics, like their framboise and their kriek. They’re all really sweet and fruited. Those beers are fine – a lot of people really enjoy those beers. We sell a lot of them. But they also make some really great bone-dry beers.”

Ritterguts Gose
“It’s slightly tart with a prominent level of salinity, so it wakes up the palate in a really unexpected way for a beer. Gose is a slightly sour German wheat with salt and coriander, originally. Now it’s been Americanized by a lot of breweries and bastardized in some ways. I see a lot of beers coming across that claim to be goses, but they’re extremely acidic, extremely sour. It’s just not really what the original gose is about. It’s something that everyone should without a doubt at least try.”

Bere Aran Cider
“It’s bone dry with barnyard funk. It’s got a lot of sediment, funk and yeast on the bottom. It’s so complex, so many different layers. This is a Basque region cider. Basque is on the border of France and Spain. We’ve got a lot of ciders to choose from in the states, but this is something extremely different and unique. I think it’s an important beverage. I don’t know if I’d call it a guilty pleasure, but it’s something I drink a bottle of every week or two. It’s also very well priced.”

*All beers available by calling 314.833.5532, through online ordering and curbside pickup due to the coronavirus. Gezellig is also now offering mystery packs of sorts, in which you specify a price point, number of beers and flavor profile or region preferences, and the team behind the bar will create a mix.