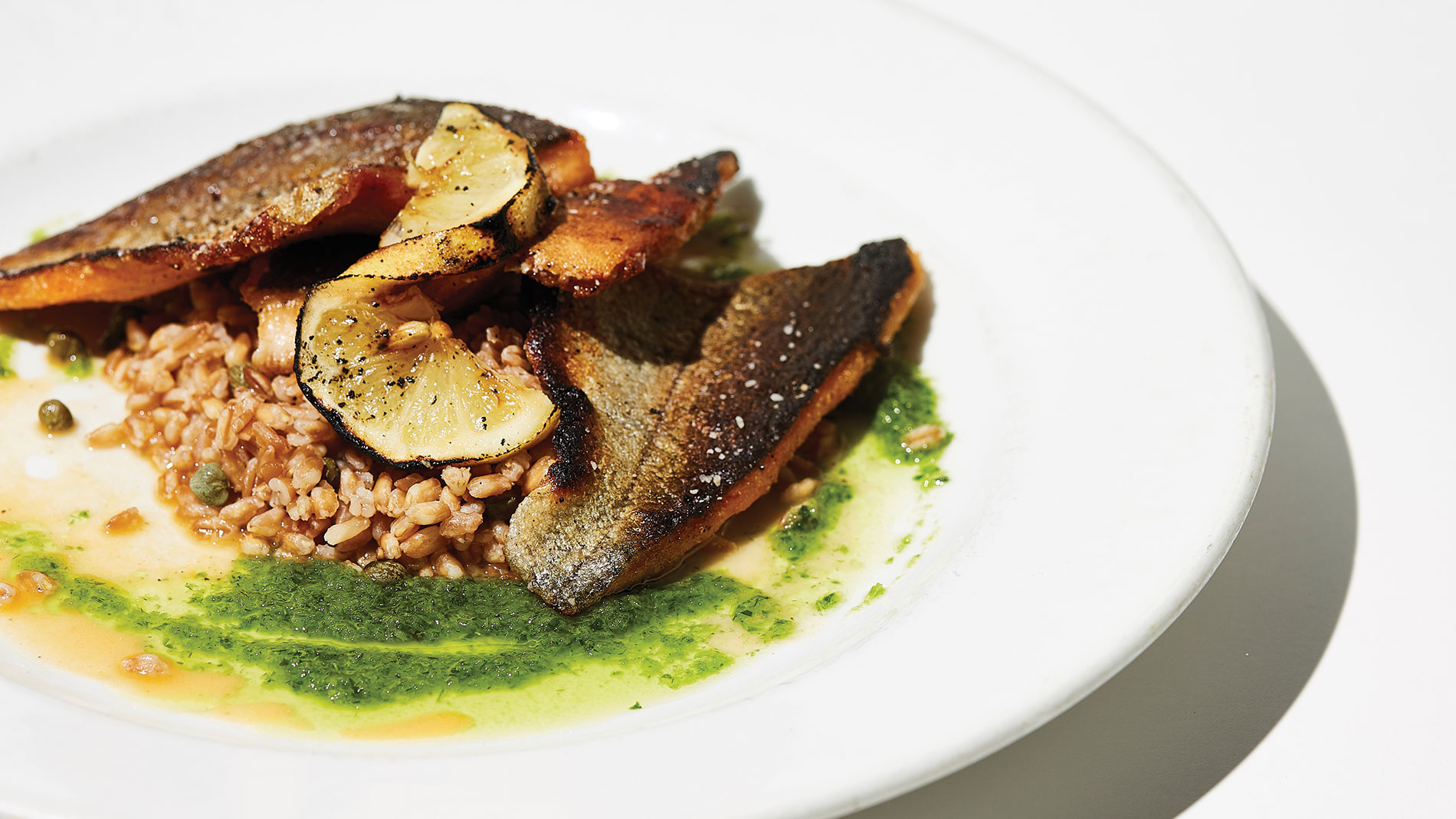 With Il Palato, Michael Del Pietro Jr. has returned to Clayton and to the casual elegance of Portabella, his early ’90s debut as a young restaurateur fresh from culinary school. It offers something different than Del Pietro’s, his recent reincarnation of the St. Louis restaurant royalty’s family restaurant, and the other places his group currently owns: Via Vino Enoteca, Tavolo V, Babbo’s Spaghetteria and two locations of Sugo’s Spaghetteria.

Rather than the old-school, cheesy red sauce dishes that define St. Louis Italian-American food, Il Palato looks to the lighter fare of southern Italy and the Mediterranean for inspiration: fish and seafood, seasonal pastas, broth-based sauces and in-season vegetables – no stuffed shells, brick-thick lasagna, thin-crust pizza or chicken parmigiano, and certainly no Provel or toasted ravioli. Craving that famous Del Pietro salad? Try one of his other restaurants.

But if salad must be had, you can do no better than the Sicilian with verdant baby greens and chopped egg glistening in tarragon vinaigrette, sprinkled with ricotta salata and crowned with a grilled artichoke heart. Thin slices of prosciutto provide salty, acidic hits.

Pairing it with an antipasto like the carote can make for a satisfying meal, especially with a glass of cellar-temp Chianti or Vernaccia. It’s hard to imagine a carrot being substantial, but this fat specimen is roasted to coax its natural sweetness and comes nestled in a hefty red wine-vegetable stock demi-glace. A layer of pistachio crumble and dollops of creamy, whipped ricotta added the final crunchy, contrapuntal note.

Follow the semi-traditional Italian meal structure off the seasonal menu and you’ll press on to the pasta course, available in primi or secondi portions. If you plan to continue with a full entree, the smaller primi will suffice. Regardless, do not skip the kitchen’s selection of seven outstanding house-made pastas.

Not much is more comforting on a cold evening than a plate of fat ribbons of pappardelle drenched in a thick, meaty pork ragu fragrant with fennel and a dollop of lemon ricotta melting into a velvety sauce. Except maybe gnocchi. The earthy-sweet dumplings were made of squash and oozed with pungent Fontina with accents of candied walnuts, shaved Brussels sprouts and spiced honey.

A dish of cavatelli is always a good idea, especially when the ridged, hotdog bun-like noodles hold onto such a deeply flavored sauce as the mushroom and pancetta ragu I devoured during one visit. The pasta’s ricotta dough produced a lighter tasting dish.

Then there was seafood linguine: a mound of silky, perfectly al dente twirled noodles loaded with rock shrimp, bay scallops and clams redolent with white wine and garlic with bits of cured egg yolk.

Listed on the menu as the piatti course, four of the six large plates highlighted the kitchen’s skill with fish and seafood. Count on the fish of the day being supremely fresh, as was the halibut one evening. This deliciously simple protein-vegetable-starch trio consisted of a 6- to 8-ounce portion of the smooth, flakey fish in a roasted garlic-chive vin, one roasted leek, a couple herb-crusted potato halves and sprinkle of mushroom duxelle. The premium price tag (market priced at $39) didn’t surprise as much as the slap-dash presentation. I found such rushed, messy plating surprising – especially in a restaurant of this caliber commanding top dollar.

On a less busy evening, Idaho trout lay across a bed of farro risotto laced with briny capers. The chewy texture of the grain played against the fish’s crispy skin and delicate flesh bite after perfect bite. A thin fennel frond pesto and slivers of red chilies imparted hints of licorice and heat without overwhelming the dish’s simplicity.

Capesante captured several flavors of the season: Four plump, meaty diver scallops, skillfully seared to medium-rare, intermingled with thick-sliced, seared parsnips in a creamy pillow of parsnip puree. Salsa verde provided a subtle tart, earthy flavor, again showing the kitchen’s mastery of balancing flavors. I greatly appreciated the bartender’s knowledge of wine and food pairing when he, thankfully, recommended a soave by the glass with the scallops, and not a commonly suggested, but clashing, chardonnay.

Desserts deserve your attention. A pan of zeppole, for instance, was perfect for sharing: six warm golf ball-sized, light and puffy lemon ricotta doughnuts in a sugar glaze and dusted with powdered sugar. You won’t want to share any of your silky, custardy panna cotta, topped here with a smooth apple butter-like compote and a lightly sweetened milk crumble for crunch.

As its beautiful white marble bar conveys, Il Palato is more sleek and minimalist than any of Del Pietro’s many other restaurants. The space has been brightened and opened up, while maintaining the tucked-in feel of its predecessor, Remy’s Kitchen & Wine Bar. Light gray velvet chairs and banquettes, a striking recessed ceiling and warm lighting further express Il Palato’s subtle elegance despite the distracting Top-40 soundtrack during my visits. The well-heeled – young and old who know how to stylishly sport that downplayed moneyed look – still gather here to sip and sup.

Michael Renner is a longtime critic and contributor to Sauce Magazine.