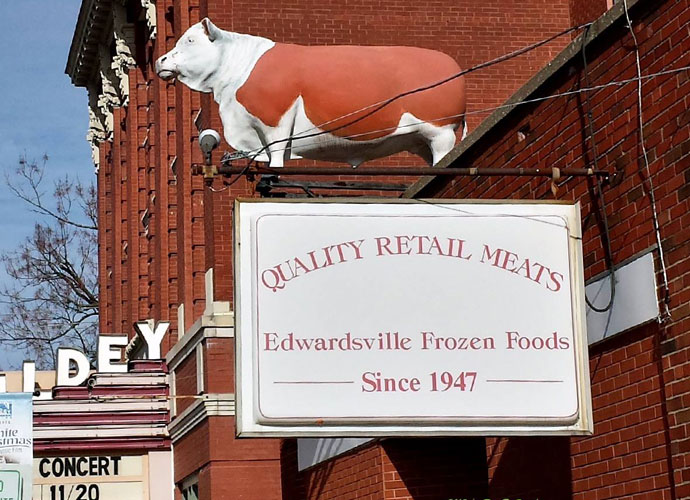 An old Edwardsville favorite is getting a new name, a renewed focus and a top area chef. Local butcher shop Edwardsville Frozen Foods at 246 N. Main St., is now Goshen Butcher Shop, and chef Ben McArthur, most recently behind the range at J McArthur’s in Lindenwood Park, will helm its culinary program.

Merkel recently joined the board of the Land of Goshen Community Market, and Keyser said they plan to partner with the market to source local products.

“We want to have a one-stop shop, where you can come in and get local produce and locally sourced meats,” Keyser said.

Keyser said they’re working with the Edwardsville Historical Society to recreate what the exterior of the building looked like in 1940s. “For the physical changes, we’re in the mapping and planning phases of those right now,” Keyser said. “We’re going to ease in and do things on a step-by-step basis.” He said the intention is to complete as many renovations as possible without shutting down parts of the operation. Interior renovations include a full kitchen, which should be ready in early summer.

While the kitchen is built out, McArthur said he’ll assist in the planning process and ramp up his knowledge of butchery. “What I’ve learned in school doesn’t always carry over into real life,” he said. “They’ve been doing it for 70 years here, so it’ll be cool to get more hands-on experience with it.”

McArthur will focus on private and public events and  high-end carryout items, as there won’t be seating in the shop. McArthur said the dishes include local produce, foraged greens and mushrooms and freshly butchered meat. “It’s going to be composed though,” he said. “It’s not just going to be thrown in a to-go box.”

McArthur said he’s excited to work in the area. “I love Edwardsville, I love the small-big town feel of it,” McArthur said. “When I was at J McArthur’s, we were working with 40 or 60 different farmers, and it was a bit of a challenge. But here, it’s not. It’s just a drive up the road, so it was attractive to me to be able to get develop closer relationships to the farmers.”

And longtime fans need not fret: Keyser said Herbie the Hereford, the oversized cow mascot, will remain on his rooftop perch.