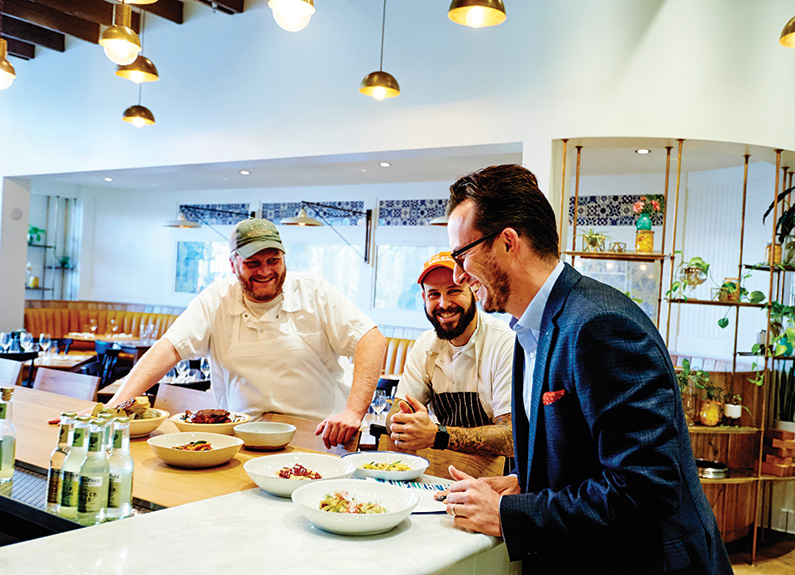 You don’t close the restaurant that just won you a James Beard Award – unless you’re Gerard Craft. He closed Niche one year after winning Best Chef: Midwest. St. Louis expects new concepts from Craft, but it was another thing entirely to eliminate his first restaurant and the namesake of Niche Food Group to try something new. Sardella had a lot to live up to.

So what kind of place is Sardella? “That’s the toughest question,” Craft said. “I think it’s our restaurant … [We’re] getting to have fun, getting to cook the food we want to cook.” It’s a place of freedom – even improvisation – for a team nationally famous for precision and adherence to Niche’s restrictive Missouri-only sourcing.

Sardella’s concept is more suggestion than mandate: food shaped by Italy, rather than Italian food. That may seem like semantics, but the freedom is in the phrasing. “It’s a slight direction,” Craft said. “Sardella is influenced by Italy, but it’s not straight Italian. Honestly, it would confuse many Italians. My greatest example is the green bean dish. It’s green beans on garam and roasted garlic custard with crispy garlic and Calabrian chile vinaigrette. It’s a dish that’s so Italian ingredient-wise, and so un-Italian any other way. When you eat it, it feels Southeast Asian.”

Italian, Southeast Asian, Missourian – one bite of this shockingly rich and savory vegetable small plate and you won’t care how it got here. Green beans (or the charred squash version now on the menu) never tasted so good. Same goes for the thinly sliced bavette steak: We don’t care why it’s topped with miso butter, we’re just glad that it is. Or the marinated sunchoke with a tender, acidic base joined by rich prosciutto and a kick of jalapeno – don’t ask questions, just eat. In this dance of Italian plates moving to various Asian, African or Mexican beats, diners have as much fun as the kitchen.


“At Niche, we were the special occasion restaurant, the nicest restaurant in town,” said general manager Chris Kelling. “But here, we just want to be the most fun.”

Even on a Monday night, the energy is high. The music is louder, the drinks better, the clientele hipper. It’s too lively to feel formal. It feels cool.

Talk to any Niche veteran on Sardella’s team, and you can see that relief, like loosening one’s tie at the end of a long day (literally – servers now wear black jeans and chambray shirts). The whole space has undergone a parallel stylish, casual makeover. The long wood bar is flanked by bookshelves. Servers weave between closer, smaller tables. The once cavernous ceiling was lowered over a wall-length butter-soft leather banquette. There are hanging plants, sardine tins and a general sense of lightness: blond wood, white walls, smiling faces.

With Craft, executive chef Nick Blue and executive pastry chef Sarah Osborn in the kitchen we expected the food to impress, but it’s the atmosphere, the posture of Sardella that’s most striking. This is a restaurant full of people doing what they love in the way they want to do it.

“It sounds cliche, but I get to throw a party seven nights a week,” Kelling said. “I enjoy doing it. I feel that energy transfers to the team, to the guest, and it’s all reciprocal.”

We feel it, too. The intimidation of fine-dining service (that sense of attempting a dance to which many don’t know the steps) is gone from Sardella, with no great loss. But anyone who’s ever hosted knows how hard it is to make a party look this effortless.

“We don’t have rules for rules’ sake, because then it stops being a service,” Kelling said. “Everything is about the flow for the guest. It’s got to be smooth and have precision. … If we just create a platform for the guest to enjoy themselves, then we do a good job.”

This is what Sardella is about: a good time. Craft has been around long enough to know that when the kitchen isn’t having fun, no one is. “That’s Gerard’s strength: He cares. He listens to feedback,” Kelling said. “If you don’t care – if you’re not listening – then the emperor has no clothes.”

We’re happy to report Craft is resplendently dressed at Sardella. We went to Niche when we wanted to feel fancy. We go to Sardella when we want to have fun – as often as we can.