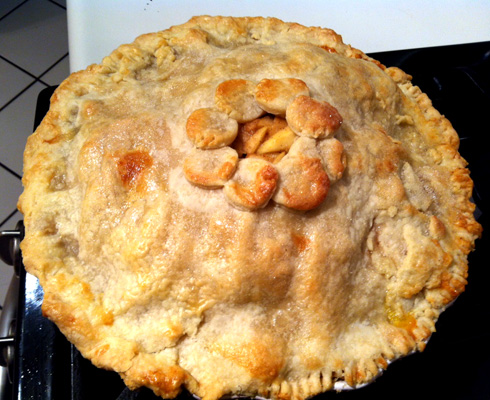 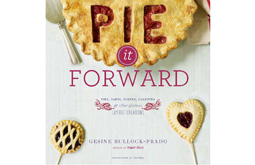 To be honest, I've never made a pie before; they seem like a lot of work because, well, they are. There are a million ways in which they can go terribly wrong. I’ve seen my fair share of homemade pies, and they’re fine, but it seems like something is always a little off: Either the crust is tough and pale, or there's a soupy interior or the fruit is mushy. You can see why I’d rather just buy the pie and stick to baking cookies.

When I first looked through Pie it Forward: Pies, Tarts, Tortes, Galettes & Other Pastries Reinvented by Gesine Bullock-Prado, I thought the book had a wealth of information to guide me to pie perfection. There are much-appreciated notes scattered throughout the book called "A Note from the Sweetie Pie," which detail what the best ingredients are for certain recipes and include helpful information on technique. 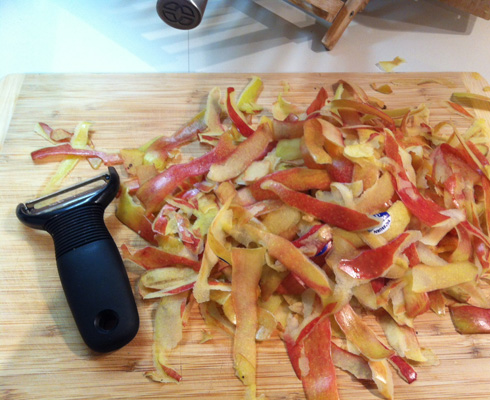 For example, she writes about which apples are the best to use in an apple pie (Cortland or Northern Spy are her favorites.); why you should refrigerate your flour; and which flour guarantees exact gluten percentages to yield consistent results (King Arthur, if you're wondering). I figured that, if I was armed with all this knowledge, I could make a pie that wouldn’t waste my time. 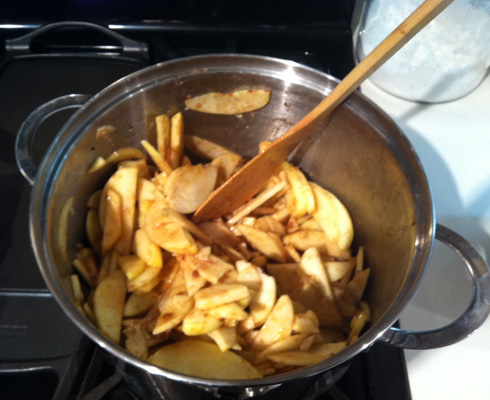 Well, it wasn't a waste of time. But I realized with all this room for error that, to make a perfect pie, I must need a solid recipe and a lot of experience. I made mistakes: I forgot to add the crust dust; my filling wasn't bubbling out of the vents; I caramelized the apples before baking but maybe not long enough.The crust was flaky and tender, and the filling was totally flavorful, with a mix of cinnamon, vanilla bean, heavy cream and brown sugar, but the filling was also soupy after baking. I assume that was because I should have let the pie bake longer, or I should’ve caramelized the apples longer. Next time, I think my pie will be better, but for my first go, I did a pretty good job.

This dough is terribly easy to make but is still incredibly buttery and tasty. You have two options: You can make it with all butter for full flakiness or add a little shortening to lend greater workability to the mix. Both are great options for double-crust pies.

• In the bowl of a food processor fitted with the blade attachment, pulse together the flour, salt, sugar and butter, until the mixture resembles cornmeal.
• In a small bowl, stir together the ice water and the lemon juice. Slowly add the liquid to the flour mixture, pulsing, until the dough just comes together. Squeeze a small piece of dough between your thumb and index finger to make sure it holds its shape.
• Turn the dough out onto a lightly floured surface and divide it in half. Gently turn over each piece of dough a few times so that any dry bits are incorporated. Form each piece into a loose disk, cover the dough with plastic wrap and let it rest in the refrigerator for at least 20 minutes.

I didn't realize how beautiful an apple pie could be until I combined the buttery lusciousness of a well-made pie crust with the sweet, creamy goodness of these lightly caramelized apples. By sauteeing apples just slightly before baking, you minimize "crust bubble," that awkward empty space between the apple filling and the top crust that result when raw apples shrink to half their size in the heat of the oven. If you cook the apples ever so slightly before you assemble the pie, you preshrink them, which results in the perfectly packed slice – no bubble.

For the assembly
1 to 2 Tbsp. crust dust
Egg wash (1 egg whisked with 2 Tbsp. water)
Sanding sugar or Turbinado sugar, for sprinkling (Note: I used sugar in the raw instead.)

Procedure for the crust
• Divide the dough into 2 pieces, one slightly larger than the other. Roll the larger portion into a rough 11-inch round. Line the bottom of a 9-inch pie pan with the dough, tuck the edges under and crimp them, then dock the bottom. Refrigerate the dough for 20 minutes.
• Roll the second piece of the dough into a rough rectangle, about 1/8- to ¼-inch thick. Using a 3-inch heart-shaped cookie cutter, cut out 16 heart shapes. Place them on a parchment-lined sheet pan and refrigerate them until needed. (Note: I didn't do this; I just rolled out the dough and cut a circle out of the middle for a vent.)

Procedure for the filling
• Peel, core and cut the apples into slices ¼-inch thick. Toss the slices in a bowl with the lemon juice and zest, to keep them from browning.
• In another bowl, whisk together the flour, brown sugar, cinnamon and salt. Sprinkle this over the apples and toss until the fruit is evenly coated.
• Melt the butter in a large heavy-bottomed pot. Add the apple mixture and saute for 5 minutes. Add the cream and vanilla bean paste and continue to cook the apples, stirring often, until the juices thicken and the apples are just tender. Make sure not to overcook the apples, or they will become mushy. Transfer the cooked apples to a large bowl, and set them aside to cool completely.

Assembly
• Preheat the oven to 350. Sprinkle the crust dust in an even layer on the bottom of the pie crust. Spoon the filling into the crust and top it with the hearts. Placing them along the outer edge first, with the pointy ends facing inward (Make sure the outer edge of the heart slightly overlaps the edge of the bottom crust – this takes about 10 hearts.). Create an inner, overlapping circle of hearts, using five more hearts, and place the last heart in the middle. The hearts should all overlap in such a way that you cannot see the filling.
• Brush the egg wash over the top crust, and then sprinkle the crust with sanding or Turbinado sugar.
• Bake for 45 minutes, or until the filling is bubbling and the top and bottom crusts are golden brown.

Have you achieved pie perfection? Tell us about it in the comments section below for a chance to win a copy of Gesine Bullock-Prado’s Pie it Forward. We’ll announce the winner in next week’s By the Book column.

And now, we’d like to congratulate Amy, whose comment on last week’s By the Book has won her a copy of Ripe by Cheryl Sternman. Amy, keep an eye out for an email from the Sauce crew.