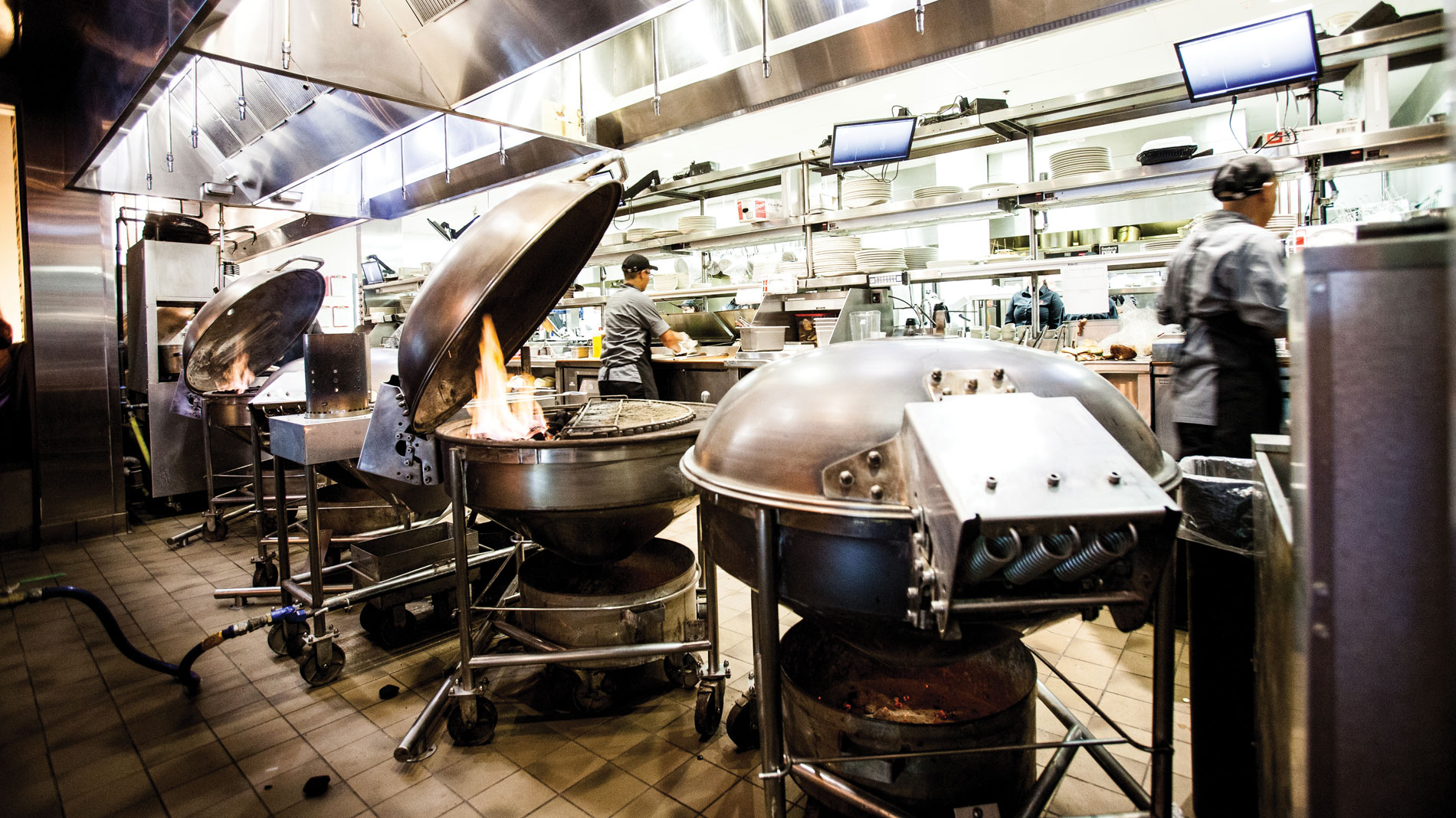 Years ago, standing in front of the hot, wide-open kitchen of Weber Grill Restaurant in downtown Chicago, amid the swirling aroma of burning charcoal, I stared in awe at a line of enormous, flame-throwing kettles. “Pretty cool, huh?” asked the general manager, who had sidled up next to me unbeknownst, mimicking my arms-folded stance. He recognized my fascination, even asking if I wanted a job. Lost in the allure of the grills, I almost accepted.

I’ve been a fanatic of the iconic domed backyard kettle cooker as long as I’ve been grilling. I still use the 1997 cobalt blue Weber Performer I received as a wedding gift (which has lasted longer than the marriage). For almost as long, mostly in my head, I’ve advocated for a St. Louis outpost of the chain.

Yes, Weber Grill Restaurant is a chain, albeit a very small one with only five locations. This is the first to open since 2007 and the only one with an on-site Weber Grill Academy. It’s a huge, nearly 10,000-square-foot space in the northernmost end of the Galleria.

Outside, a massive red kettle sits atop the building: the holy grail (or rather, the holy grill) for Weber devotees, while a freakishly realistic sculpture of Weber inventor George Stephen Sr. greets diners at the entrance. Walking through the doors is like entering Oz, where it’s a cookout every day. Almost every design element alludes to grilling, from the iron grill grate Venn diagram dividing the room to the little grill etched into each wine glass. One thing’s for sure: They certainly know how to capitalize on the primal theme of cooking food with fire. From steaks and burgers to fish and fowl – even pizzas and some salads – fire unites nearly everything on the expansive menu.

You expect a great burger from a company that spent decades perfecting and peddling grills, and the signature Prime Kettleburger was a great one: a coarse ground patty of prime Angus beef – salty, seared, smoky – topped with a slab of sharp Vermont cheddar and bourbon grilled onions sandwiched between a toasted ciabatta roll hefty enough to tame the meat’s juiciness, but fluffy enough to smoosh and grab without everything sliding out into your lap. Less expected was the excellent wood-fired crabcake appetizer, fat with jumbo lump crabmeat and served atop a Southwest salsa of black beans, poblano pepper, smoked corn and tomato. Presented in a small cast-iron skillet with avocado slices and chipotle mayo, it made a worthy shareable starter.

Steaks also make an appearance, as expected. The 16-ounce boneless Delmonico rib-eye – dry-aged for almost a month – looks big over a mound of garlic mashed potatoes, but it was thinner than expected for the $38 price tag. Beer-can chicken done in a Weber is almost as iconic as the grill itself. The chicken was remarkably juicy, even when cut in half and grill-finished. Remarkable, too, was the utter lack of grilled flavor; I understand the distinction between grilling and barbecuing, but I still expected some noticeable evidence of time spent with charcoal. As it stood, all the bird’s flavor came from Weber’s Beer Can Chicken Seasoning (hints of garlic, onion, red bell pepper and lemon peel), one of a whole line of very specific seasonings available for purchase, and another example of how the chain capitalizes on the Weber allure.

I suspected the same was true with the baby back ribs appetizer: four small bones (“rib fingers,” as the server called them) over a tangle of can’t-stop-eating thin, crispy cornmeal-battered onion rings. The ribs looked perfect with a good char and shiny glaze from sticky hickory sauce. The meat was tender with the proper resilience and chew, pulling cleanly off the bone when gnawed, but like the chicken, lacked the essential smoky component.

I had high hopes for the BBQ Combo (your choice of two or three meats and two sides) as a way to sample how Weber does barbecue. The brisket – described as smoked 14 hours over hickory wood – had the requisite red smoke ring, but again, not the anticipated flavor. Pulled pork was fine, but derived most of its flavor from a slather of hickory barbecue sauce.

The extensive drink program was anything but phenomenal with an emphasis on (forgettable) cocktails, a deep wine list (eight pinot noirs, four zinfandels!) and 30 craft beers, including Schlafly’s hefeweizen rebranded as Weber’s Backyard Brew.

The place is run with the efficiency of the German train system. When that BBQ Combo arrived with a cold side of broccoli and lukewarm sweet potatoes, it was instantly whisked away and replaced. Servers recite memorized specials with exuberance – the bone-in steak “cuts like velvet” – then move on.

As I stood again staring in awe at those giant kettles, I thought about my longed-for St. Louis Weber Grill. I didn’t have any bad meals during my visits; the portions were certainly satisfying, and the atmosphere was comfortably inviting. “Lackluster” was what I thought, as if the curtain had been pulled back, revealing not a wizard, but just a guy and a grill and a company very good at building an empire on allure. There’s nothing wrong with that. But as much as I love the concept of a Weber restaurant, I’ll probably stick to my good ol’ blue grill at home.