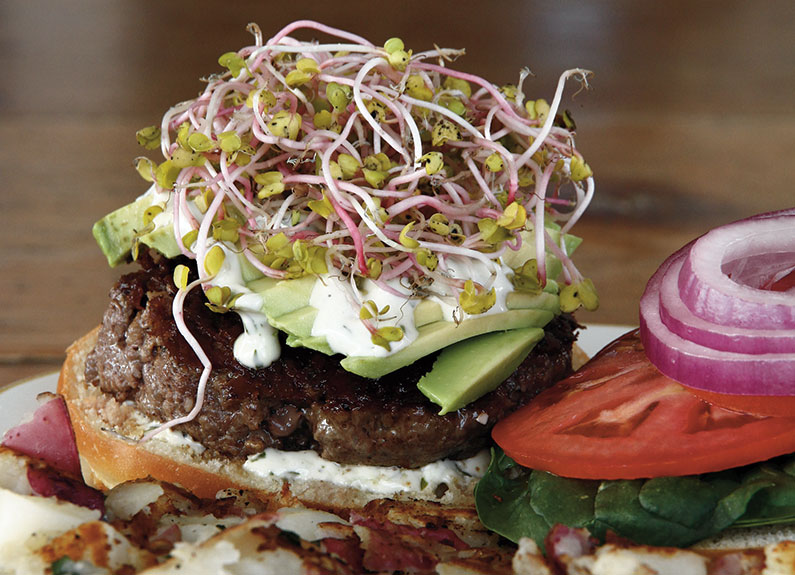 the goddess burger from the wolf photo by elizabeth jochum

Review: The Wolf in Ballwin

The Wolf is designed to look like a wood cabin transplanted from a Colorado resort, but the warm and welcoming vibe can’t overcome middling dishes that relegate the grill to a convenient stopover instead of a dining destination.

Apres ski (or shoveling the drive)
The rough-hewn ambience at The Wolf is a story unto itself. Various watercraft hang from the wooden ceiling and walls, along with bicycles and skis. The decor is rustic enough to make a Missourian feel guilty for spending the winter on a treadmill at the gym instead of snowshoeing the back 40.

Appetizers, soups and so on
The food isn’t quite as carefully appointed. An appetizer of house-made hummus was disappointingly bland, and the rough-chopped artichoke tapenade was missing the sharp tang one expects of the dish. However, the Billy Goat potato chips drizzled in melted Gouda and balsamic glaze made for a surprisingly substantial nosh with a kick.

A three-bean chipotle chili certainly brought the heat, but underneath the peppers there was little in the way of complex flavor. The soup that day, French onion, was made with an oddly thin broth, as if the stock had been yanked from the stove too early. Using Swiss cheese, rather than the traditional Gruyere, didn’t do the dish any favors either.

Sandwiches, burgers and sides
The highlight of the grilled sandwiches selection is the Double Dill. Made with dill pickles and dill-havarti cheese between buttery, grilled slices of marble rye, it’s a grilled cheese for grown-ups – and a great one at that.

The most popular item on the menu at The Wolf is the Black Bear black bean veggie burger. Combining a loosely packed veggie patty, avocado and a toasted brioche bun by local bakery Breadsmith, it certainly carried the heat of chipotle mayo, but more complex flavors again proved elusive.

The Goddess Burger, with its hormone-free beef, avocado, sprouts and Green Goddess dressing on a toasted brioche, was a lovely textural trinity of meaty, creamy and snappy.

Sides included the Smashed Potatoes, diced breakfast potatoes made with less oil but offering only a stingy kick of pepper. Spice seems to be the kitchen’s utility player, but it’s applied erratically.

Eat Dessert First
The strongest dishes at The Wolf may be the house-made desserts. (Others, including the cheesecakes and a gluten-free coconut roulade, are made off-site by Sugaree Baking.) The gooey butter bar, made with local honey, was a 3-by-3-inch revelation, sidestepping the cloying sweetness that so often hamstrings St. Louis’ signature dessert. A chewy raspberry jam oat bar also had a winning, muted sweetness. The cookies, in flavors like chocolate chip and peanut-butter cup, were enjoyable, if unusually doughy and dense. Not so rewarding, however, was a pumpkin scone that offered little pumpkin flavor and none of the firm texture that makes for deserving scones.

Drink Me
The Wolf’s conscientious menu-planning extends to its selection of seven local craft beers, Mississippi Mud coffee and Excel soda. Keeping the local economy humming, according to a sign near the door, is the company’s goal.

Lunch Traffic
Diners order at the counter, and runners deliver the food when it’s ready. The line can grow long at the peak of lunchtime, but I didn’t witness any logjams. The staff was uniformly attentive and considerate.

The Takeaway
With its welcoming wood-and-stone design and emphasis on sustainability, recycling and eating local, The Wolf is doing everything right, nominally. Yet much of the fare, with its humble combinations and inconsistent seasoning, hovers closer to so-so than stellar.