Midnight Meal: ‘Twas the night after dinner service, when all through the house, not a creature was stirring besides a chef and

Patrick and Suzanne Connolly know a thing or two about being night owls. From the moment they met and began dating from a distance – Suzanne living in New York City, Patrick working in Boston at Radius, for which he would receive the James Beard Foundation award for Best Chef: Northeast in 2008 – to their newlywed years in New York to his current job at Italian gastro-pub Basso, Patrick has always been an executive chef. “It’s so funny when my friends call me and say, ‘I’m so mad at my husband. He did not tell me he was coming home at 8 o’clock tonight,’” Suzanne says. “I’m like, 8? That’s awesome!”

But just because the hours are often long and always late, doesn’t mean the Connollys never eat dinner together. At least a few nights a week, Suzanne stays up until Patrick gets home, so they can share a meal. She prefers not to cook. Why should she? When you’re married to a chef (and consequently a restaurant and its hours), there have to be perks.

So what happens after dark, when the rest of us are sated and asleep? A midnight meal that must be fast, easy and, most importantly, worth the wait.

Suzanne describes a routine night: “He walks in and I say, ‘Feed me.’ And he’s like, ‘I just walked in.’ I say, ‘Feed me. I’m dying.’ He goes into our pantry and knows. The first time he was at my house, I had nothing in my kitchen. Nothing. He somehow managed to pull together this amazing frittata. I was like, ‘I don’t even know where you got the ingredients for this.’ I thought he was going to grab a frozen Lender’s bagel. He takes whatever is there and creates a meal. It’s pretty awesome.”

Although Patrick claims to rarely repeat one of his by-the-fly dinners, there are certain mainstays, like chicken soup. “I have two versions. One is the daylong chicken soup that’s on the stove for six hours. And the other is the ‘Hurry up, I’m starving’ version.”

“Suze tried to make one when we were living in Brooklyn. I remember because when I got home, there was this poor drowning chicken in the bottom of a stockpot covered in water just looking up at me like, ‘Somebody do something.’”

“I can defrost, and I put things in the microwave,” Suzanne defends herself.

“That one holiday you made brisket …” Patrick encourages.

“I can make a few family recipes.”

“And there’s her spaghetti and meat sauce recipe …” Patrick says with a smile.

“He doesn’t think my meat sauce is real because I use Prego.” [Patrick laughs.] “I add meat. I doctor it up.”

“God forbid, we just have easy-peasy,” Suzanne retorts. “He’s incapable of just making a normal grilled cheese. Everything has to be presented and plated.” 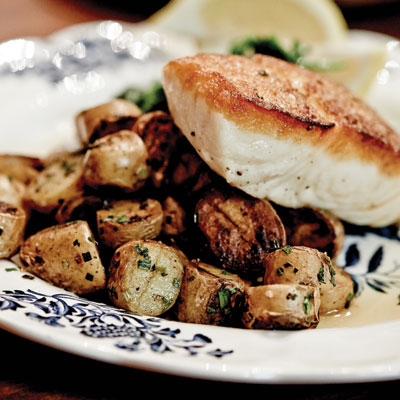 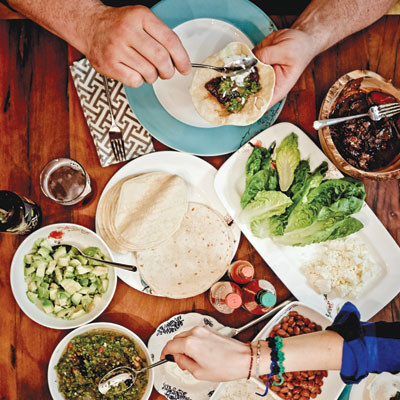 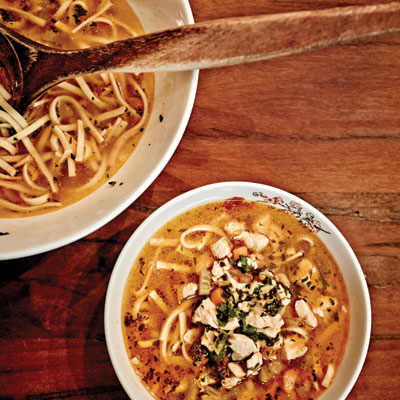