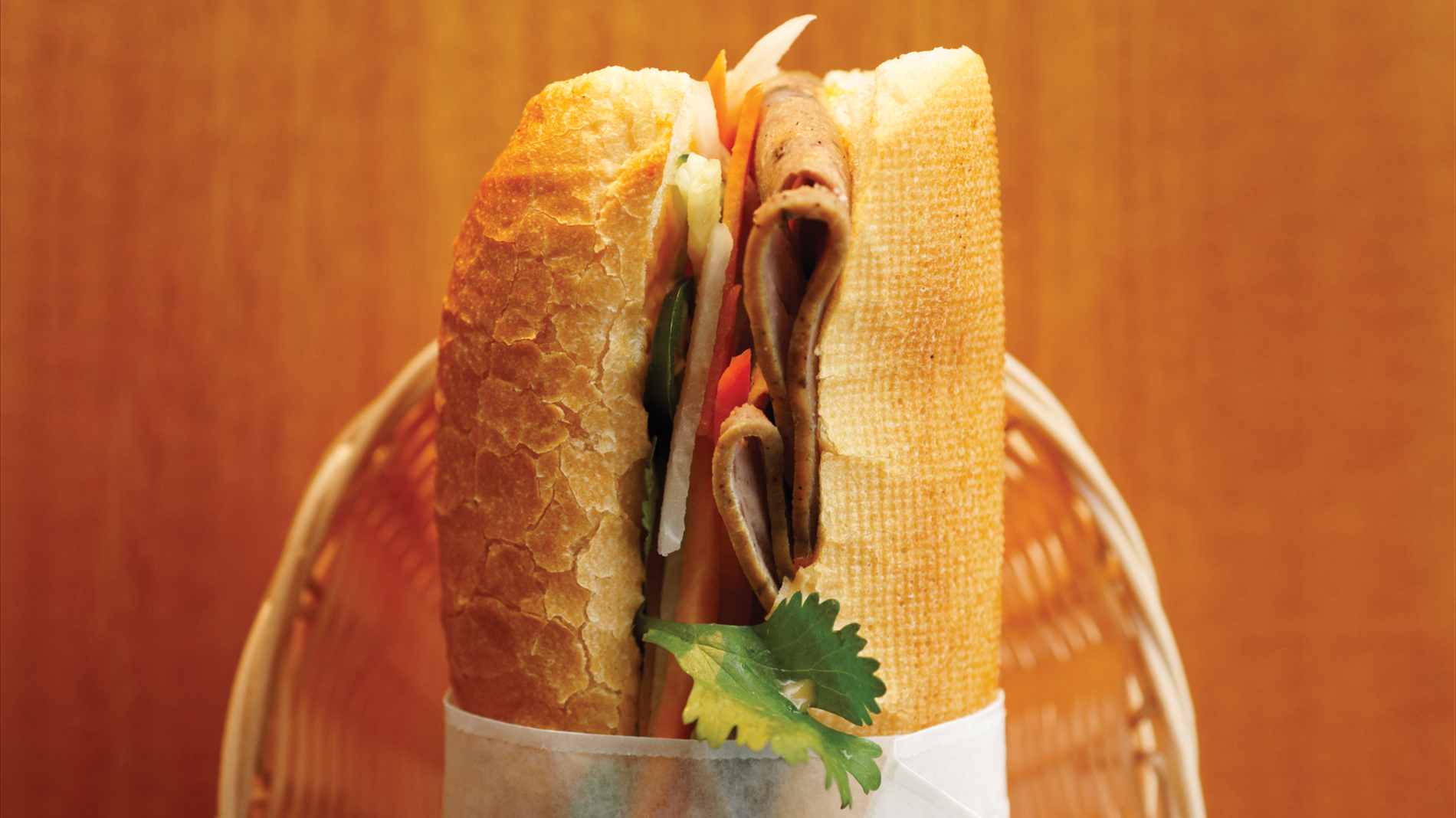 "It’s a party in your mouth, man,” Qui Tran remarked with a laugh.

Tran, who runs Mai Lee Restaurant and co-owns it with family members, was characterizing the bánh mì (pronounced BUN-me), the so-called Saigon sub. “It’s a staple,” the 32-year-old added, “just as much as noodles and rice.”

Reflecting the colonial French influence on Vietnamese cuisine, this sandwich starts with either a demi-baguette or a 7- to 10-inch section of a standard baguette. Sliced lengthwise, with the top and bottom still hinged at the back, the soft bread is dressed with mayonnaise, butter or both. The bánh mì’s beauty, though, depends on its vegetative ingredients: hothouse or pickling cucumbers, peeled and cut into strips; carrots, grated and pickled, often with daikon (đô chua); sprigs of fresh cilantro (ngò); and jalapeños or other peppers, sliced or included whole. The crisp, sweetish pickled carrots and radish dance on the palate alongside the herbal snap of cilantro and the sting of peppers.

To those ingredients, a variety of proteins can be added. Tran paused only an instant to reflect on his own fave. “The answer for me is ‘yes,’” he replied with another chuckle. “There is no wrong protein for me. Traditionally, it’s all the pork, all the pork products, the different pork cured meats, the pâté.”

The bánh mì’s play of flavors and textures makes it addictive, and locally, the sandwich provides a taste of Vietnam that’s both inexpensive and surprising. “It looks innocent,” Tran said, “but man, when you bite into it, it’s heavy-duty. Because of the pâté, because of the chiles that are in it, the pickled vegetables. It’s a lot goin’ on.”

Dutchtown’s Banh Mi So #1 offers a memorable meatball sandwich, the bánh mì xíu mại, which, like the establishment’s other offerings, looks as unassuming as a standard sub from an idealized ’50s grill. Pork meatballs are tucked in the baguette so neatly that the small size of the sandwich belies its massive flavor, the meatballs offering a pleasingly mealy texture to balance the snap of the veggies. A scrumptious mélange assembled with almost artistic precision, Banh Mi So #1’s bánh mì xíu mại, in its deceptive modesty, may tempt diners to order a second, especially because it incorporates meatballs smaller and more manageable than those of a standard Italian meatball sub.

One of the more noteworthy local variants of the bánh mì graces the menu at BBC Asian Cafe & Bar in the Central West End. There, lamb inspires wolfish gusto over an exceptionally well-balanced, if amusingly messy, sandwich. Its drippy bliss comes not from the thin-sliced, steamed meat, which has a robust but not overpowering flavor, but from a generous application of mild, house-made mayonnaise and from the preparation of the nonmeat ingredients; unlike other bánh mì purveyors, BBC chops the veggies and even the cilantro, boosting the sandwich’s juiciness – a napkin’s a necessity.

Mai Lee in Ladue plates a wonderful bánh mì gà, made with chicken. There, sandwiches come swaddled in white butcher’s paper, bound with hair-thin blue rubber bands. Despite that restrained presentation, the bánh mì gà suffers no restraints in the taste department. The baguette strikes just the right note between chewy and crusty – diners won’t have to brush too many crumbs from their shirts – and the sandwich’s shredded white meat mingles with mayo for a texture noticeably more velvety than pork-based bánh mì. On Mai Lee’s sandwich, in particular, the interplay of the pickled vegetables and the nonpickled contingent can tickle a diner’s taste buds, and the chicken’s creaminess even damps down the peppers to a manageable level.

Including something as commonplace as a fried egg on something as otherwise exotic as a bánh mì might seem strange, but Tower Grove South’s Phúc Loi does just that with its bánh mì đặc biệt – a catchall phrase that describes a given restaurant’s “special combo,” usually involving liver pâté and showcasing Vietnamese charcuterie. The special at Phúc Loi incorporates grilled pork, ham, headcheese (whose slight crunch may disquiet some diners) and that egg, the creaminess of whose over-hard yolk counterpoises the crispness of the veggies and moderates the fire of the sliced jalapeños interspersed in the sandwich to the last bite. This bánh mì đặc biệt makes a fine way to jump-start a sunny, cold Saturday.

Truc Lam may well plate the textbook bánh mì, with sliced pork and pork patties. The restaurant – where Vietnamese-sounding music thrums in the air – categorizes the bánh mì as a mere appetizer, even though the sandwich can be quite filling. A word of caution, though. One of the wee, verdant green peppers lurking in Truc Lam’s bánh mì, if eaten alone, can prompt public tears and hiccups. Still, savor it alongside (say) cà-phê sũ’a nong – a potent coffee with sweetened condensed milk, which makes even the best latte taste as dull as dishwater – and learn why the bánh mì is so popular with sandwich fans of all stripes.