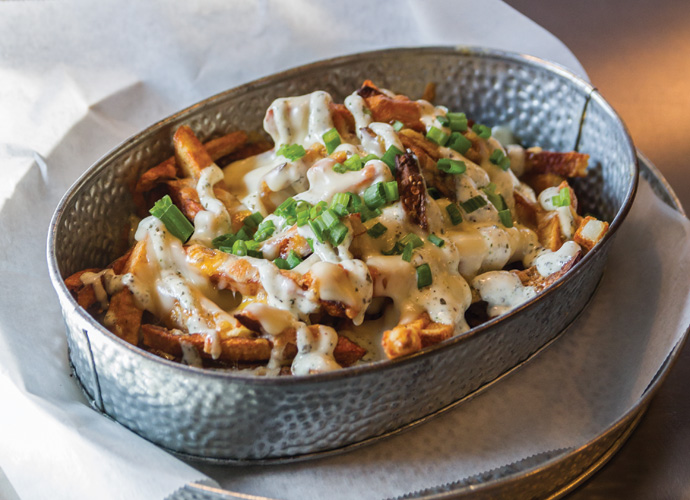 Twisted Ranch will move to larger space in Soulard

After just a little more than two years in business, Twisted Ranch will soon move to a new, larger location just a block away. As reported by St. Louis Magazine, the ranch dressing-themed eatery, located at 1730 S. Eighth St., will relocate to 1731 S. Seventh St., the former home of Soulard Restaurant & Bar, which closed earlier this year after a fire.

Twisted Ranch co-owner Jim Hayden said he hopes to make the move sometime in January. He said the new space, including the outdoor dining area, is almost three times larger than Twisted Ranch’s current location, and though the layout isn’t complete, he estimated there would be approximately 120 seats.

Twisted Ranch was the subject of a BuzzFeed video this summer that Hayden said caused an “exponential” increase in business. “We struggle with wait times right now, so it’ll be nice to let people in a little quicker,” he said.

The move not only means more space for seats, but a significantly larger kitchen as well.

“The current kitchen is so tiny. With a larger, properly functioning kitchen, with space for storage and prepping, we will be expanding the menu,” Hayden said. “We may not do that day one, we might transition with the current menu and work out the kinks and then get some more options available.”

He said he doesn’t foresee the transition interrupting service significantly.

“We are going to attempt to stay open as much as possible [during the move],” he said. “There’s a chance we’ll have to be closed for a day or two, but it should be a pretty easy move.”

As the devastating effects of COVID-19 send shockwaves through our community, some locals are stepping up ...

Many St. Louis restaurants and bars have opted to temporarily close during the coronavirus pandemic.

The fam is hungry and you don’t feel like cooking. Your frozen ...

Checking in with… Susan Zhu of Tree House

In our new column, Checking in with…, we’re catching up with local food ...

We are constantly craving the hearty Midwest-meets-South-meets-East Coast vibe of Peacemaker Lobster ...