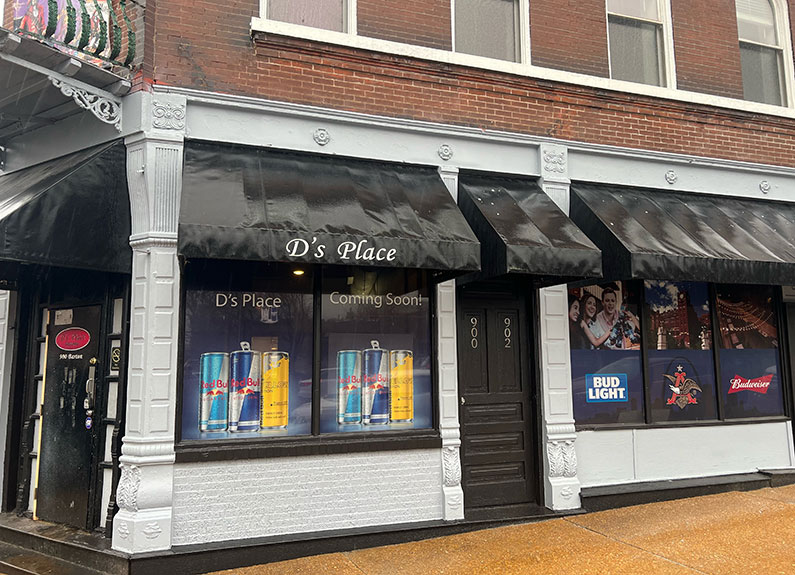 D’s Place will reopen in Soulard in February

Well-loved Soulard bar D’s Place is set to reopen at 900 Barton St., almost a year after it closed its doors. The bar shut down following the death of owner Dan Shields in April 2022, but three new partners have taken over the operation and hope to have D’s Place open again in early February, just in time for Mardi Gras.

The new owners are Jessica Foster, a stalwart member of the team at D’s Place for a number of years, along with her husband, Donald Keener, and Dean Johnson. Keener is one of the co-owners of Paddy O’s, and Johnson’s career in bar operations has included stints at John D. McGurk’s Irish Pub and Garden, Paddy O’s and Syberg’s. “I would say between the three of us we’ve got close to 60 years of experience,” Johnson said.

Foster in particular knows D’s Place inside and out. Johnson said she was a “pillar of the place” at D’s for many years. “She bartended down here, and a lot of people came in to see her,” he said. Johnson and Keener were also long-term customers, and after putting their heads together, the trio decided to take on the responsibility of reopening D’s Place. “There was kind of a moment where we all looked at each other and said, ‘Well, we don’t want somebody else to screw this up, so here's an opportunity to get in here, put a little love back in the building, and make some upgrades where it was needed,’” Johnson said.

Johnson said the layout and feel of the 2,000-square-foot bar won’t change, but that renovations will yield improvements to everything from the flooring and sub-floor to the bathrooms, kitchen and bar area. “We got in here and kind of gutted the place out because, quite frankly, it just needed it,” Johnson said. “We put new ceramic tile in the bar area, we're building the bar as we speak, so new bar, new back bar, new tile by the bathrooms.” Johnson added that the bar’s game room will remain largely untouched, with its arcades still in place, and the bar has also added new TVs for screening live sports. The patio will also be spruced up in time for the spring.

A revamped menu will bring back the items D’s regulars loved and add a few new dishes. From the old menu, the burgers, pizza and Buffalo chicken wontons will make a comeback. “I’d rather do 20 things really well than 40 things not so well,” Johnson said. He added that the end result will be “slightly elevated bar food ... good every time you walk in the door and consistent.” The drink list will have something for everyone, from a selection of beers and wine to cocktails, with drinks specials for game days and a happy hour.

With all the changes, Johnson said the goal is still to retain the soul of D’s Place as it was under Shields’ management. “It was kind of the neighborhood bar,” he said. “It's a little off the beaten path, it’s Ninth and Barton, so it’s not the heart of Soulard. So this was kind of like the getaway bar for all the locals.”

D’s Place will be open seven days a week from 11 a.m. to 1:30 a.m. Johnson said that the team hopes to have the bar open in the first week of February, and certainly in time for the month’s Mardi Gras festivities, including Taste of Soulard on Feb. 11 and 12 and the Mardi Gras parade on Feb. 18.