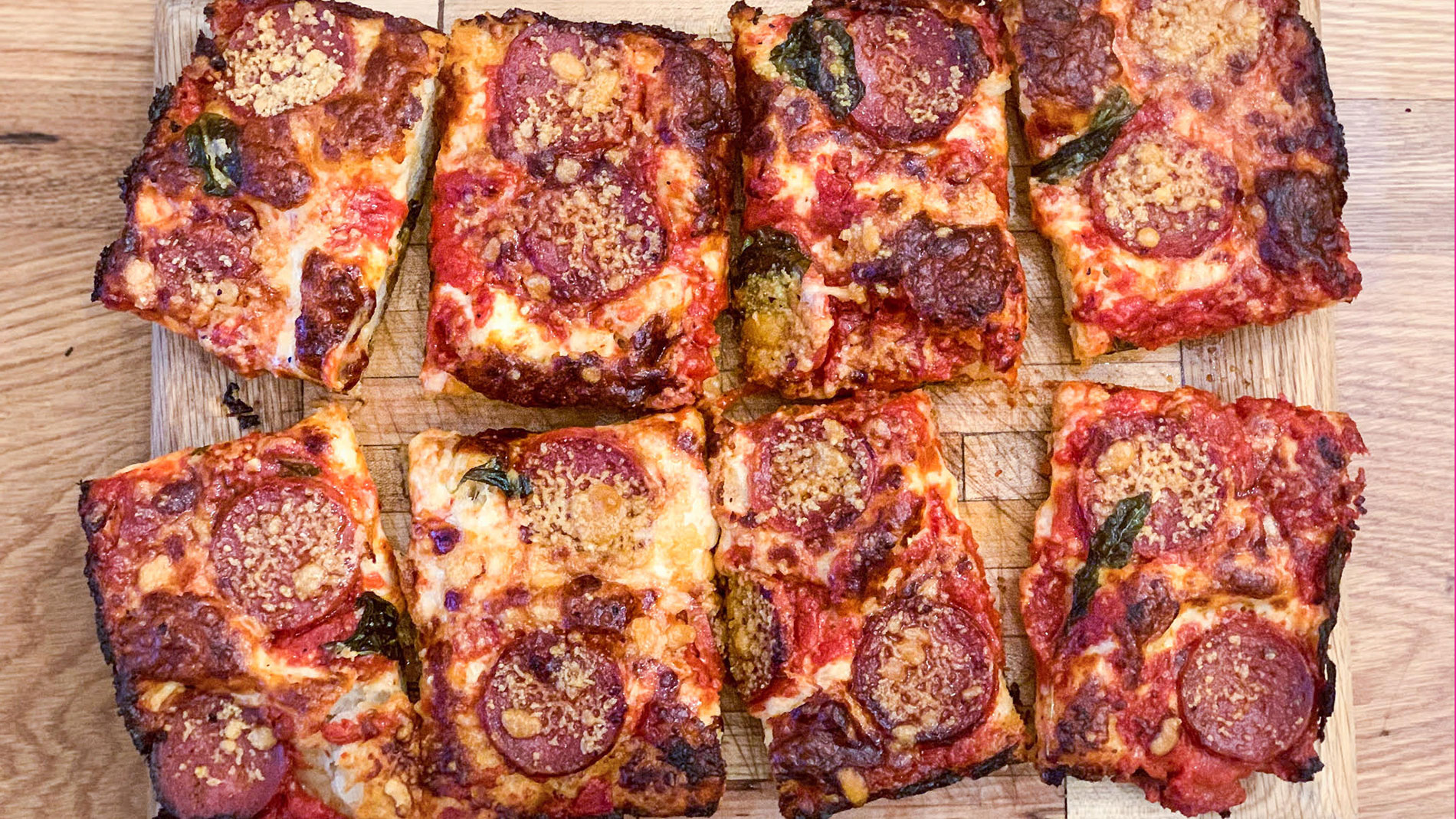 Since Lola Jean’s Giveback Coffee was effectively shut down by the pandemic, with some of its offerings subsequently integrated into the service at Russell’s on Macklind, Russell’s has been using the Lola Jean’s space as a production kitchen. Now owner Russell Ping wants to try something new with the space and take his pizza concept to the next level. “It's going to have kind of a permanent pop-up feel inside that production facility,” Ping said. He added that Russell’s is committed to operating Lola Jean’s Pizza for the next year before assessing next steps. “If the community and everybody is really into it then we'd really like to see this become more of a permanent concept in that space, and possibly move our production bakery somewhere else," he said.

The pizza at Lola Jean’s Pizza will be the same Sicilian-style, square-edged pies with a distinct focaccia-like crust that Ping introduced at Lola Jean’s Giveback Coffee when the pandemic shut down dine-in service in the spring of 2020. The key difference is that where the pizza's earlier iteration was a take-and-bake format, Lola Jean’s Pizza will serve up hot, ready-to-eat pizzas, boxed and ready to take home.

Ping himself will be in the kitchen overseeing the pizza operation, with a simple menu initially offering two pizza options. For the signature house pizza, “we're leaning towards doing a house-made Italian sausage, pepperoncini and black olives and fresh oregano," Ping said. "It's going to be somewhere in that wheelhouse.” The other base pizza will be a margherita, with build-your-own options allowing customers a degree of flexibility and variety of toppings.

Additional items offered will include hot chocolate chip cookies, baked so each cookie order is fresh out of the oven when the customer comes to pick up. Ping said the menu will be adapted over time as he learns more about how the concept is working and what customers want. He added that although Lola Jean’s Pizza won’t offer drinks, customers will be able to buy and pick up bottles of wine from Russell’s on Macklind, which is just a block away at 5400 Murdoch Ave.

All pizza orders must be placed prior to the day of pickup using an online ordering platform. Pickups are scheduled at 30-minute intervals, with four slots open for customer orders during each window. Once those slots have been filled, they’re gone, so be sure to place your order early if you want to get your hands on one of those pizzas.

Ping said the advance ordering format and limited availability of slots for ordering allows Lola Jean’s a degree of control that should simultaneously ensure a high quality product for the customer while the operation remains manageable. “It'll give us a really nice view of what we'll be prepping for the evening, to let us put a nice amount of attention into each pizza that we're making,” he said. “It’s going to be a fun, real small project.”

Although there will be no formal service at Lola Jean’s Pizza, the space will have a few tables set up, and Ping says there will be a “gathering space” type of atmosphere where customers are welcome to sit down and enjoy their pizza rather than take it home to eat.

Lola Jean’s Pizza will be open three nights a week: Monday, Wednesday and Friday, from 4 p.m. to 9 p.m. Ping said he’s confident of a mid-January launch, but follow Russell’s on social media for announcements and updates over the coming weeks.