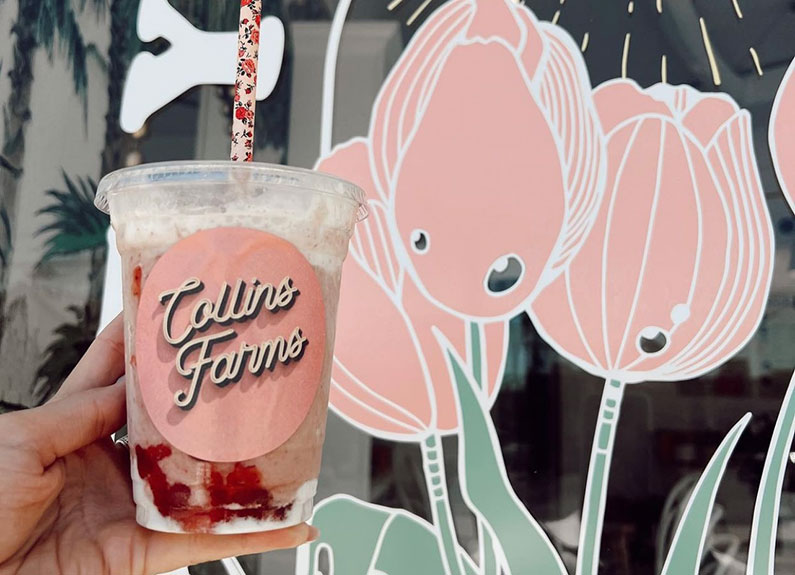 a smoothie at Collins Farms photo courtesy of collins farms

When sisters Sophie and Annie Gianaris found their way back to Edwardsville after each spent time living in other parts of the country, they wanted to open the kind of place they felt their hometown was missing. “I’ve been trying to bring a big city concept to our small town,” said Sophie Gianaris.

Specifically, they missed places where they could find big, healthy salads, and that was the prompt for Collins Farms. The salad list includes the Gianaris sisters’ spins on classic salads – Cobb, Caesar, Greek (a nod to their ancestral roots) and more. “Our salads are pretty gourmet,” Sophie said. “We wanted to make a whole meal, not just a normal salad that you just get anywhere.” Current top sellers on the salad list include the barbecue chicken and Buffalo chicken salads, as well as the summer salad, which combines mixed greens, strawberries, onions, avocado, tomatoes, feta and sunflower seeds with a balsamic vinaigrette. “This was such a void that needed to be filled in Edwardsville,” Sophie said. “We wanted it to be an experience that no-one had seen before that lives here.”

With minimal experience in the restaurant industry behind them, the Gianaris sisters simply trusted their own instincts as they developed their recipes. They worked slowly, with the conviction that if they could create salads that excited them, they believed other customers would be similarly enthusiastic. “Pretty much all this year and last year we would just come up with recipes, throw things together to see what tasted good, see what didn’t and get rid of things,” Sophie said. “It was all trial and error. We’ve been practicing this for probably a year and a half.”

Since opening, the sisters decided to draw on another Greek staple by adding gyro-style pita wraps to the menu. “We took that and made it into buffalo chicken pitas, barbecue chicken pitas,” Sophie said. “The pitas have really taken off for us.” On Saturdays, they add bagels to the mix, which are shipped in from a New York supplier. The bagels are served with your choice of cream cheese, or there are bagel sandwiches with fillings like egg, sausage, bacon or lox.

The Gianaris sisters are also appealing to customers with their visually enticing smoothies. Sophie said she’s coming up with new ideas every week. “We had a cloud one, we had a strawberry shortcake one that has done extremely well over the past week,” she said. Finally, Sophie said her chocolate chip cookies have been a huge word-of-mouth hit with customers. “They’ve been selling like crazy,” she said.

The market area at Collins Farms adds a quality that Sophie describes a “bougie, upscale corner store.” The selection includes hard seltzers and snacks, as well as Collins Farms merchandise including trucker hats and more.

The sisters themselves may be taking their first steps in the restaurant business, but their grandfather knew all about working with fresh produce – in fact, their restaurant borrows its name from his farm. Their grandpa passed away two years ago, but the sisters learned an important lesson from him early in life. “He was always like, ‘Get your greens, eat your greens,’ making me salads and greens,” Sophie said. As they set out to feed Edwardsville its greens, the Gianaris sisters decided it was fitting to name their restaurant after the place where they absorbed the importance of eating well.