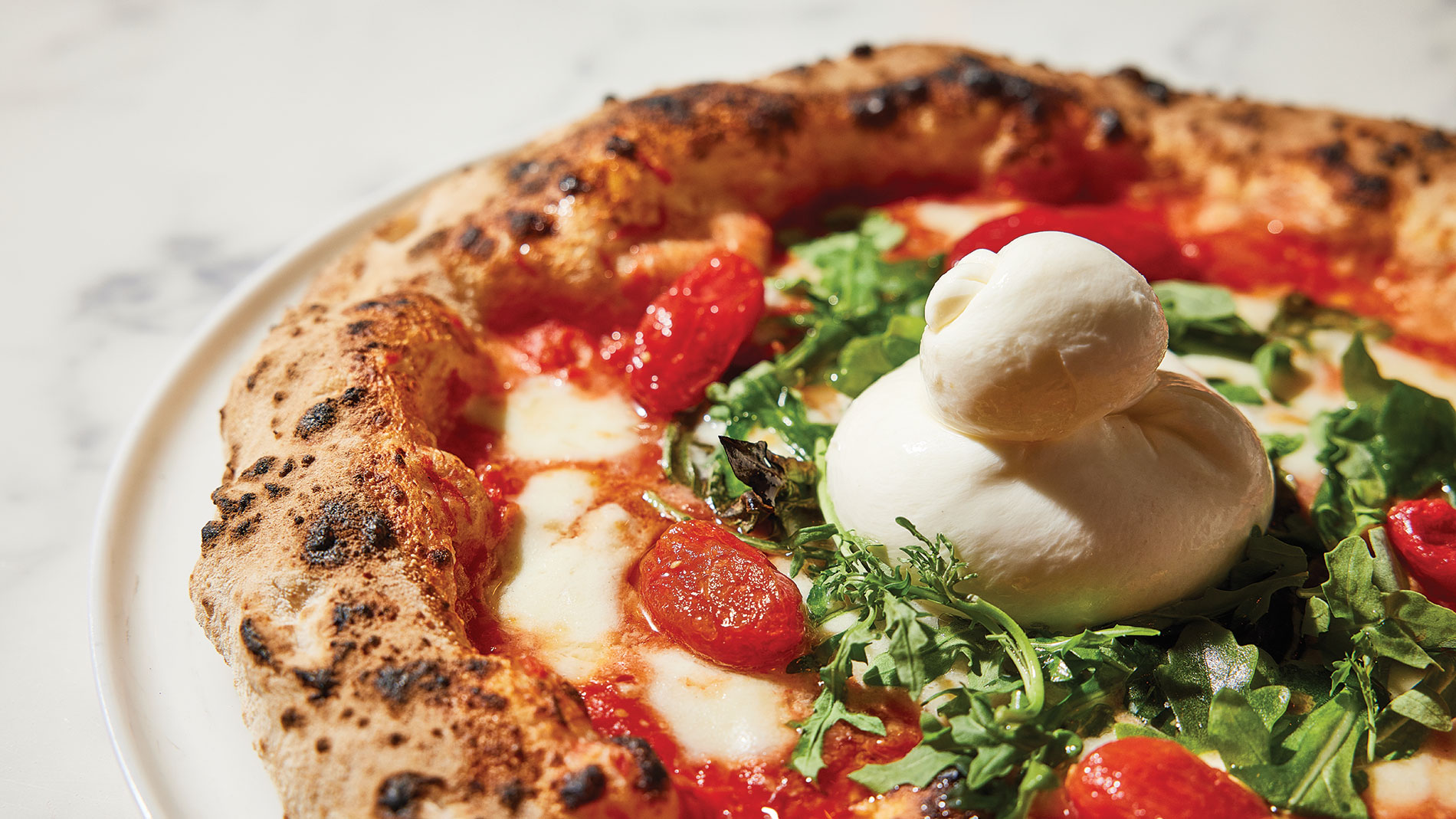 Burrata is popping up on growing numbers of menus across the city, and we’re loving the many ways available to enjoy it. It’s easy to confuse burrata, a relative newcomer to the cheese scene (it was created in Italy in the early 20th century) for a glob of fresh mozzarella. And while the outer casing is exactly that, once cut into, a pool of decadent cream and stracciatella – shredded, fresh mozzarella cheese – oozes out for a delicate, exceptionally rich and indulgent treat.

Not all burrata is created equal, however, and the way it’s presented is just as important the burrata itself. Here are our top three faves at the moment.

Noto Italian Restaurant
The Neapolitan-style burrata pizza at Noto Italian Restaurant is utterly divine. The pizza, which boasts the most impeccably chewy and charred crust, has a San Marzano tomato sauce topped with fresh mozzarella imported from Italy, olive oil, basil, arugula and confit tomato; Sicilian sea salt provides an extra special flourish. A chilled ball of burrata is placed atop the pizza, which is served uncut to prevent too much moisture from the velvety burrata rendering the crust useless in supporting the toppings. Once the pizza arrives at your table, cut into the ball of cheesy deliciousness and spread it across the pizza for an exquisite contrast of temperature and texture.
5105 Westwood Drive, St. Peters, 636.317.1143, notopizza.com

Louie
The burrata at Louie is an off-menu special only available Thursday through Saturday, and you do not want to miss out on this sublime delicacy. The creamy cheese is made in Puglia, Italy, by the Deliziosa brand, then overnighted to Chicago and flown to St. Louis. The Louie team is so proud of their phenomenal burrata that they do almost nothing to it before serving, only adding a bit of top-quality olive oil, along with a sprinkling of Maldon sea salt and fresh-cracked pepper in order to allow the rich, buttery cheese to really shine. It’s served with grilled and generously oiled light and mild sourdough from Union Loafers Cafe and Bread Bakery – an accompaniment we will never tire of.
706 DeMun Ave., Clayton, 314.300.8188, louiedemun.com

Katie’s Pizza & Pasta Osteria
At Katie’s Pizza & Pasta Osteria, the mushroom burrata is served BYOB (build your own burrata). A ball of burrata sits alongside a mushroom agrodolce and Breadsmith ciabatta crostini moistened with high-quality olive oil. The most recent iteration included morels, while the next incarnation will likely feature chanterelles. Although the locally foraged mushrooms change with seasonal availability, the rest of the dish remains the same. The sweet-and-sour agrodolce in which the mushrooms are stewed includes an aged balsamic reduction, porcini mushroom stock, freshly shaved garlic, fresh thyme and a touch of butter, which makes for super juicy ‘shrooms. Spread an ample portion of the burrata on your crostini, then top with a heaping spoonful of the mushrooms for a delightful bite.
14171 Clayton Road, Town & Country, 636.220.3238; 9568 Manchester Road, Rock Hill, 314.942.6555, katiespizzaandpasta.com