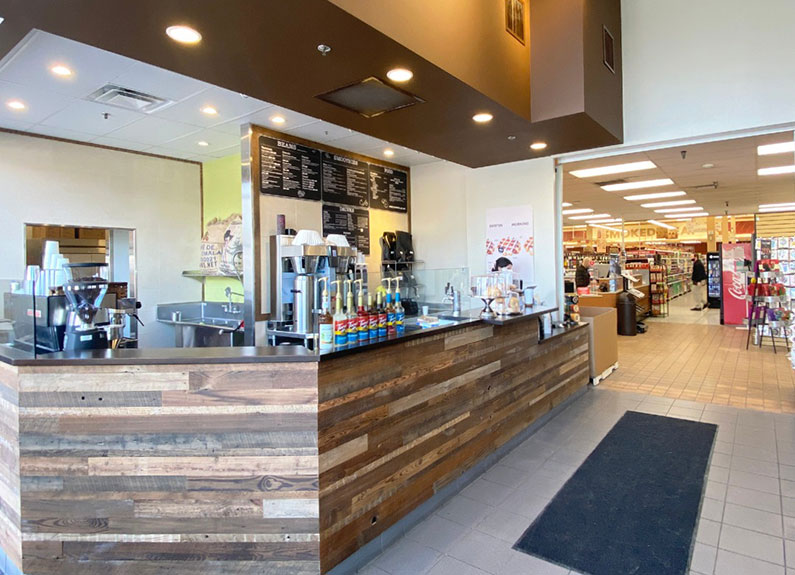 As of last Monday, Feb. 28, Northwest Coffee Roasting Co.’s new space inside the Webster Groves Schnucks (8650 Big Bend Blvd.) is officially open, according to owner Jason Wilson; he also pointed out that the outpost went live on the last day of Black History Month. “At first, I wasn’t quite interested in being buried inside a Schnucks, kind of like a Starbucks would be in a Target, where you have to walk inside the store to get to them,” Wilson explained. “With this location, it’s a true retail space, and it’s right next to the front door, which gives me independence.” The space was previously a Jamba Juice.

Wilson said the menu at Webster Groves will be the same as Northwest Coffee’s Central West End location (4251 Laclede Ave.). “We serve our waffles, our egg wraps, our smoothies, our two signature sandwiches – chicken salad and a bagel and lox sandwich,” he said. “And the main thing we’re known for, which is coffee. Lattes, cortados, Americanos, amazing drip coffee and pour-overs.”

For Wilson, who went to school in Webster Groves, adding a location in this Schnucks was an easy decision. “It’s a very welcoming community. It’s cool because I’m walking in and I know some people. Everyone’s welcoming,” he said. “Central West End is a bigger space – it’s not the same.” Still, wherever he finds himself, the initiative is the same for Wilson. “We inspire folks to control their narrative, which is why we started the company,” he explained. “When I bought the company in 2012, we wanted to compel folks to dispel the rumors and be who you may be.” He said their motto (“control the narrative”) is very much alive at the new space, as it was at Chronicle Coffee, his previous cafe in North City. “We wanted to grow from that community and show people that although they’re not doing the types of coffee shops we have in the suburbs or the county, we do deserve this. I wanted to control that narrative.”

Another wave of redevelopment is coming to Westport Plaza courtesy of owners Lodging Hospitality Management (LHM), ...

Benton Park Cafe​ will reopen its doors this winter with new ownership at 2901 Salena St. ...