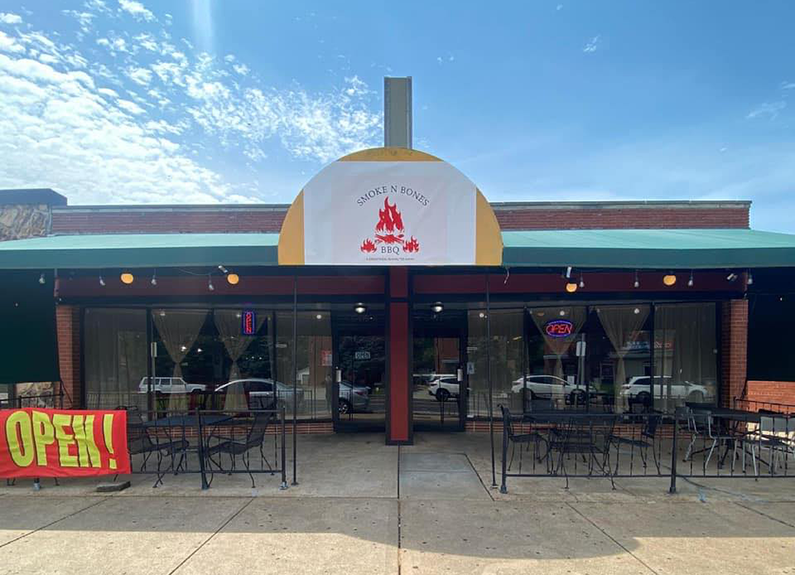 Smoke N Bones offers a full barbecue menu with appetizers, sandwiches, salads, sides and a kids menu. Meat options include pulled pork, beef, chicken, sausage, turkey breast, beef sausage and pork ribs. All are made with a dry rub, and sweet, spicy and mustard sauces are available at tables or in to-go containers. “Our beef is actually not brisket because brisket is more of a fatty meat. We sell more of a lean meat called the ‘knuckle cut’ of the cow. We slice it just like brisket, it looks just like brisket, but it tastes better than brisket and is juicier,” he said. Sides include broccoli, cheesy potatoes, green beans, barbecue beans and more.

Lunch and dinner plates come with your choice of meat, two sides and two pieces of garlic bread. The lunch plate includes six ounces of meat, while the dinner plate has eight ounces. Family combos are also available, like the BBQ For 4, which includes a full rack of ribs, a pound of meat, a whole chicken and four sides.

Inside, Machado has added TVs and barbecue-themed decor, including a statue of a cow, a pig and a chicken. He will also add a Smoke N Bones logo to the back wall sometime in July. Machado is working on obtaining a liquor license and will offer a full bar once approved. The space is roughly 3,000 square feet and can currently seat 50 people, plus about 14 seats on the patio. “When I saw this location, I scouted it for a couple days. It’s just a nice atmosphere with a lot of foot traffic. It’s always busy,” he said.

Smoke N Bones BBQ is open for carryout, dine-in and delivery. Hours of operation are 11 a.m. to 9 p.m. Monday through Thursday, and 11 a.m. to 10 p.m. Friday through Sunday.