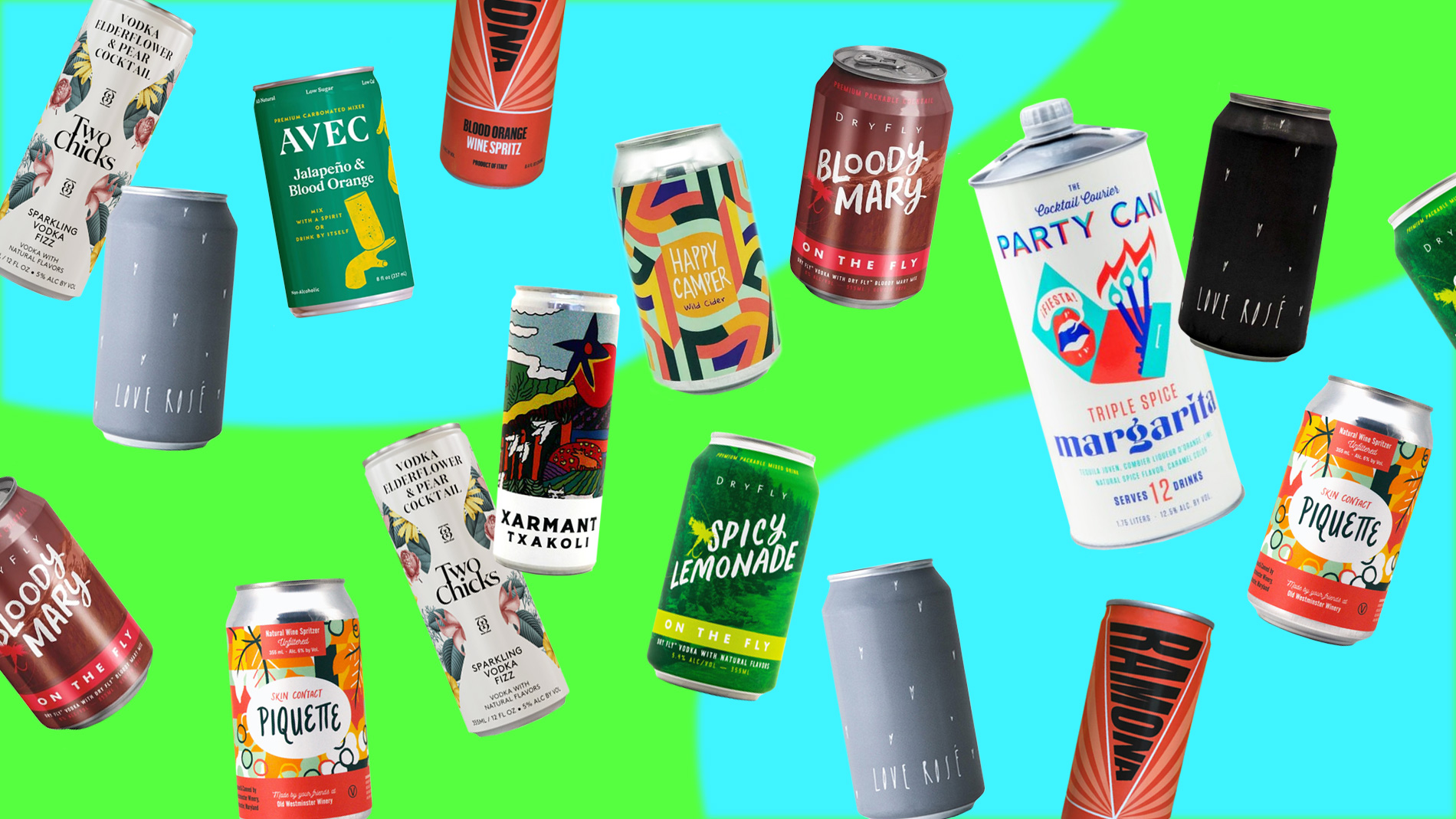 Fantastic cans and where to find them in St. Louis

Canned beverages are a strong choice, especially in the summer. Like many, I started getting more into canned drinks during the pandemic last summer, when my social life consisted almost entirely of drinking in the park or in my backyard with my friends. Though wine is usually my beverage of choice, passing the bottle seemed dangerous then, even when we were masked up and using copious amounts of sanitizer; on top of that, technically, most parks don’t even allow outside glass. As the way we spent time together changed and portable, single-serving refreshments became more of a priority, canned wines, cocktails and seltzers emerged as a clutch move.

In the past few years, canned drinks (that aren’t beer) have been on the rise, especially in light of the massive success of spiked seltzers like White Claw and Truly. Local and regional producers like 1220 Artisan Spirits, Pinckney Bend Distillery, Urban Chestnut Brewing Co. and Mother’s Brewing Co. have entered the game, while local bottle shops have upped their distribution of new and interesting options. Even well-known wineries like Las Jaras, Broc Cellars and Artomaña Txakolina have started putting their juice into cans, which are usually really good. What’s more satisfying than tossing your homie a cold tin of skin contact wine or holding a canned gin and tonic while you throw the frisbee? Cans are easy, fun, accessible, and, in most cases, reasonably priced – suffice it to say, they’re an underrated choice. But with so many products out there, how can you find the good stuff?

Unlike beer, where you basically know where you can get your favorite brewery’s greatest hits, bottle shops tend to stock based on their own vibe, meaning it can take more legwork to track down the drinks you want. On the other hand, there’s a silver lining: When you go to your favorite bottle shop to grab some fresh cans, you’ll likely be choosing from a highly curated shelf that reflects what the owners know and love. As I’ve kept more of an eye out for good canned drinks, I’ve found that St. Louis’ bottle shops all have distinct identities and offerings.

At Southside Wine & Spirits, I discovered Dry Fly Distilling’s On the Fly line of beverages, which features flavors like spicy lemonade, huckleberry lemonade and bloody mary; an employee said that the brand is a perennial bestseller. Also on the shelf were a couple options from Two Chicks Cocktails: a vodka, elderflower and pear cocktail and a paloma. The elusive but hyper-popular triple spice margarita party can from Cocktail Courier was available at Southside too. At Pastaria Deli & Wine, the Ramona blood orange wine spritzer is a popular item that’s nearly always in stock; they currently have Old Westminster’s Happy Camper cider, which I haven’t seen anywhere else in town. Cork & Rind usually has canned wine from Broc Cellars and Old Westminster, while AO&Co. carries Avec, a producer of delicious carbonated drinks that can be used as mixers or enjoyed alone. I drank the jalapeno and blood orange sparkling mixer while driving home from AO&Co. on a hot day and found it to be pretty tasty (and actually somewhat spicy), but wished I’d had some tequila to cut it with. Obviously, supply and curation change, but the point here is that all of these shops had something different to offer, and most of it was pretty cool.

Wanting to know more about how local shops are curating their shelves, I talked to Simon Lehrer, who’s running the can game (among other things) at Parker’s Table. According to Lehrer, the philosophy at Parker’s is simple: They taste everything. “If we like it, good, that’s all we’re looking for. It just has to taste good,” he explained. “We may get excited about something for a little while, and then you taste something else and think, ‘No, no, no, that one’s substantially better.’” On that note, it’s not uncommon that a drink that’s been around for a while might get knocked out of the pole position. “We used to carry a different gin and tonic until we tasted Pinckney Bend and thought, ‘Oh, that’s the superior product,’” he said. So they switched.

Lehrer’s observed that people are more inclined to buy bottles than cans, and that people usually need a reason to explore the world of tin. “They’re going floating or to the park, or hanging out at the pool,” he said. “They can’t have glass. That’s usually the only way to get them to try it to begin with.” But like with any good product, once people see the light, they warm up to it. And in Lehrer’s view, the day of the can is still on the horizon. “It’s taken 20 years for screwcaps to finally gain some modicum of acceptance in the community,” he said. “Tin isn’t seen as classy enough for the dinner table.”

But that hasn’t stopped good producers from exploring the territory more and more. Recently, Artomaña’s Xarmant Txakoli – a popular Spanish rosé – started going into cans, and Lehrer jumped on the occasion to stock it, expecting it to be one of the summer’s big hits. Not all wines and cocktails successfully work as cans, though, especially if customers are already familiar with the flavor. “It [can’t] taste like it comes out of a can. It can’t have any of that tinniness – that’s probably the hardest thing with a lot of these,” Lehrer said. “If they have a bottled version of it, it has to taste just like that fresh bottled version.” As a fan of that bottle, I can say that it’s pretty darn close.

Since canned wines and cocktails are still fairly new to most drinkers, Lehrer advises staying on top of the ABV and volume so you don’t go overboard. “One of the things people miss out on a lot of times is the size of the tins,” he said. “If you’re getting a regular 12-ounce can of wine, that’s half a bottle. People don’t realize how much quantity is in cans.” On the other hand, smaller cans, like 250-millileter ones, are better for small-quantity consumption, where a full can or bottle may simply be too much. “Those work extremely well for mimosas or bellinis. The small ones are great for keeping in the refrigerator - you don’t want to open up a full bottle that’s going to go to waste.”