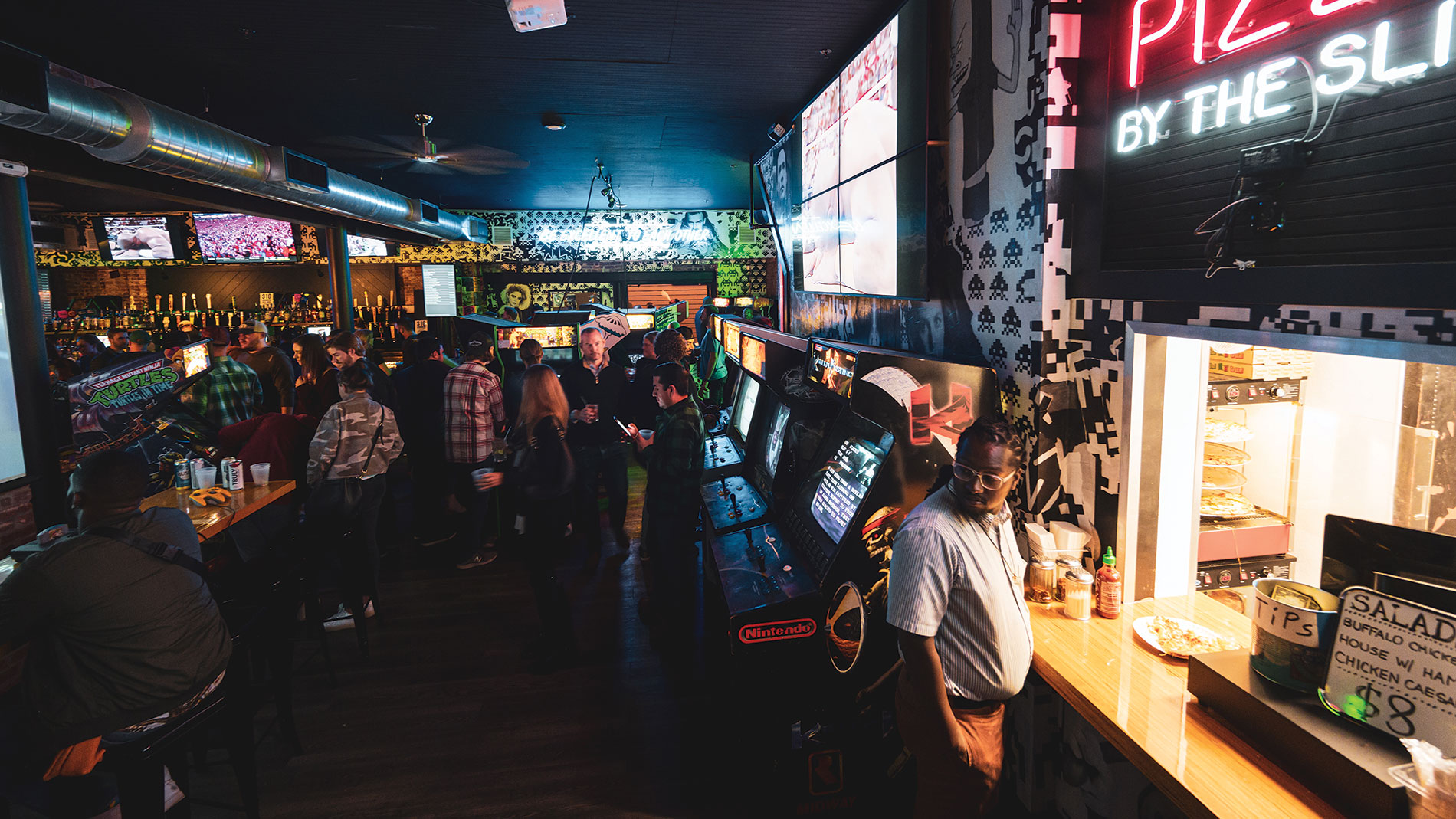 Up-Down in the Central West End is a fun assault on your senses. The fifth location of the Iowa-based concept, this arcade bar goes big on everything that matters – the games, the beer list and the size of its pizza slices.

The 21-plus bar is insanely popular on weekends. Crowds flock to the spot to play pinball, skee-ball and dozens of other arcade games, from Dance Dance Revolution to Paper Boy.

Games, stuffed into every corner on Up-Down’s main floor and in the divier-feeling basement, cost a quarter to play; you can also get tokens via credit card from the bar, while token machines are cash only. Along with drink specials, Up-Down offers a lot of great game deals. On Fridays, the first 100 people get 20 free tokens. On Saturdays, tokens are two for one until 9 p.m. You also can get 40 free tokens on your birthday.

It’s a noisy party with energetic music pumping loud above the games’ many dings, pows, splats and revving engines. The decor packs a nostalgic punch too. A Mario Bros.-esque, black-and-white graphic pattern adorns the walls, TVs screen ’80s and ’90s movies such as Ghostbusters and The Blues Brothers, and quotes from cult classics (“Be excellent to each other.” and “Show me the money!”) glow in neon.


A few small tables are scattered throughout the bar. It can be difficult to snag one during peak weekend hours, but sitting and chatting is hardly the point here. The wall of windows along Euclid Avenue in the former Herbie’s space lets in some much-needed fresh air.

If Up-Down feels a tad claustrophobic and overwhelming, the large pet-friendly patio also provides an escape and a chance to play lower-tech games such as giant Jenga, Connect Four and shuffleboard. Unlike the arcade games, these are free, as is the Nintendo 64 projecting Mario Kart on a large screen in the bar area.

Separate bars have been thoughtfully included to service the patio and basement, cutting way down on the time you have to wait in line and jostle for a drink. The beer list is a little different for each one, with the biggest selection at the main bar, where you can choose from an impressive 60 taps (the patio has about half that).


A large number of local brews are offered, including 2nd Shift, Heavy Riff, Modern and Perennial. If you have trouble choosing, the bartenders know what they’re talking about and will happily make a recommendation. If beer’s not your thing, you can also have them mix you a cocktail.

Pizza is served by the slice or the whole pie through a small window in a corner. At only $3.50 per massive slice ($4 for specialty pizzas), it’s a great deal. It’s not artisan by any means, but it’s fantastic – the kind of pizza you crave late at night. The mac and cheese pizza seems especially designed for boozy nights. Overkill? Yes. Delicious? Absolutely.


Aside from that, the options are pretty standard – cheese, pepperoni, the Meat, and the Mona Lisa, a veggie creation with spinach, green peppers, artichokes and tomatoes. The slices come out quick and hot and are sturdy enough to eat standing up.

The games will bring you back to simpler times, the beer list will make any drinker happy, and who could complain about pizza topped with mac and cheese? Up-Down is a boisterous, crazy fun addition to the local nightlife scene.