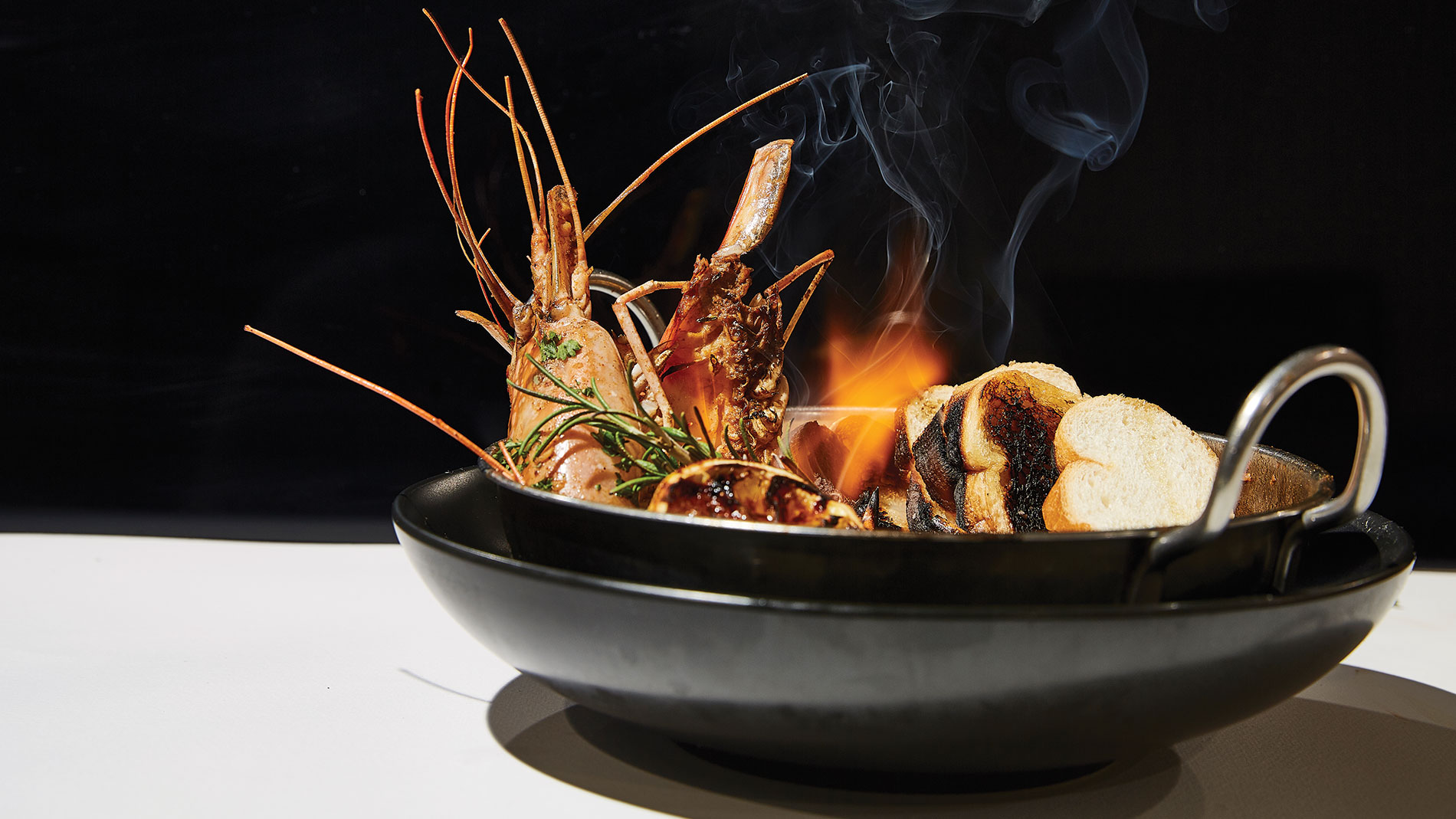 the flaming wicked prawns at bait photos by izaiah johnson

A wine room showcases an illuminated wall of bottles, a burnt orange banquette and artful photographs of black icons. In another room, vibrant paintings of octopus tentacles pop against light gray walls.

Throughout, black marble tables, velvet chairs and splashes of gold convey subdued opulence, while glimmering candles and various chandeliers, including the main sea urchin-like fixture, cast a romantic radiance. Scoring a secluded two-top is a must for date night. Outside, the street-facing veranda provides a party-like al fresco dining option.

It shouldn’t be noteworthy to point out that during my visits, Bait’s customers reflected a racial diversity rarely seen in St. Louis restaurants. The restaurant not only fills a seafood fine dining niche in the city, it does so without pandering to any particular audience.

General manager Misha K. Sampson is a fourth-generation Creole, which is maybe why Bait reminded me of what I love most about upscale New Orleans dining culture, without any of the old-school stuffiness.

When Hodgest conceived of the first floor of the Lindell mansion he bought in 2015 as a seafood restaurant, he recruited Sampson and executive chef Ceaira Jackson away from the catering company they ran; both were previously at Fleur de Lilies, the Creole-Asian restaurant in Soulard where Jackson cooked and Sampson co-owned.

At Bait, Jackson creates an alluring array of fish and shellfish as impressive on the plate as on the palate. Her Caribbean red snapper is a great example. The whole fish, jacketed in a craggy, barnacle-like, deep-fried crust and nestled upright between mounds of spiced, garlicky rice (think dirty rice) and pickled napa cabbage slaw, makes for a dramatic presentation by itself.

Jackson dresses the fish with thick squiggles of her creamy, orange Bait Spice aioli and microgreens, then dials it up with a trio of flavorful sauces on the side: chimichurri, hot pepper and mango-chili. Presumably, these are provided to encourage sharing bites of the tender, mild fish. You won’t.

Before that, there are small plates to share: sticky, sweet-hot Thai chili wings punctuated with peanuts and lemongrass topped with fresh, crunchy vegetable slaw; a meaty crabcake the size of a hockey puck accompanied by Bait’s spiced remoulade and crowned with black bean and corn salsa and a crab claw to break through; and a trio of charbroiled oysters with various toppings.

Sampson has constructed a solid wine list, which never breaks $15 a glass. There is no bar to speak of, so it’s worth snagging a table to snack on a few small plates while sipping a signature cocktail like the sparkling, bourbon-driven Devereaux highball.

From the main dish menu, my deftly cooked Chilean sea bass – meaty, moist and bronzed with a crispy edge – came perched atop bechamel sauce with fingerling potatoes, baby bok choy, verdant broccolini and a scattering of clams, mussels and microgreens. It was a delicious one-plate meal, making the $36 price tag a bargain.

Scottish salmon stuffed with spinach and Parmesan, also skillfully prepared, would have been as impressive as the sea bass were it not for the overly sweet, incongruent sweet potato mash underneath.

If you want something more fitting of the Gilded Age, you could get the 30-ounce tomahawk steak for two. But if it’s lavish you want, Bait’s stuffed lobster lemon-pepper linguini (market priced at $60 during my visit) makes for a visually arresting, decadent dish chock-full of shrimp, lump crab and perfectly grilled lobster, deconstructed to show off its crusher and pincher claws and spindly legs. I liked the rich combination of white wine butter and truffle butter as the sauce, but covering it all in bechamel proved too rich and overpowered the delicacy of the crustaceans.

In between visits, seafood fettuccine changed to squid ink pasta because too many diners sent it back, thinking fettuccine was synonymous with creamy Alfredo sauce. Both were the same dish, comprising squid ink fettuccine noodles tossed in herb butter-olive oil sauce with lump crab, prawns, roasted tomatoes and crowned with one big scallop. It would have been a fine entree were it not so difficult to find a hint of whole shrimp.

More disappointing, though, was that I had to alert my server that my squid ink noodles lacked their namesake. Only then was I informed they were out of squid ink pasta and had substituted regular fettuccine. While service overall was quite good, if a bit lagging at times, an informed server would have conveyed the fact before ordering – especially in a fine dining restaurant commanding fine dining prices.

Consulting pastry chef Tyler Davis brings the whimsy he was known for at The Chocolate Pig. A miniature baked Alaska with mint-berry jam provided a not-too-sweet end to a large meal. If you want a little bit more, the chocolate layer cake with cappuccino ice cream satisfies.

But the s’more showed off Davis’ creativity with a mound of marshmallow fluff, graham cracker and drizzled chocolate served under a glass swirling with wood smoke that, when removed, harkened childhood and campfires.

Like any good businessperson, Hodgest knew what he didn’t know and that Jackson’s culinary prowess and Sampson’s managerial skills were just what his dream restaurant needed to distinguish it from anything else in town. Bait’s fine dining ethos doesn’t feel stodgy or contrived, and its food doesn't feel standard or conventional.