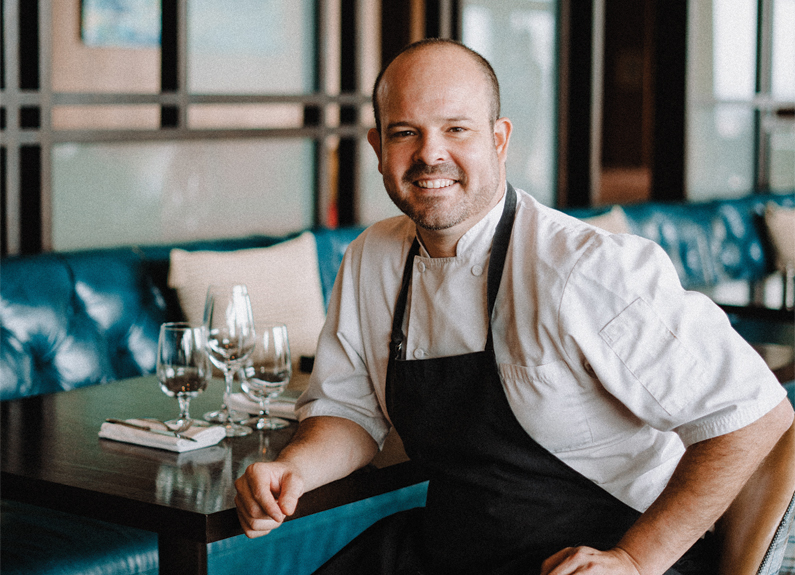 What I Do: Aaron Martinez of Cinder House

Aaron Martinez has made the rounds of the fine dining world, working in the kitchens of esteemed California establishments like Quince in San Francisco, Commis in Oakland and Addison in San Diego, as well as In de Wulf in Belgium before settling in St. Louis last year. In July, after a stint helming the kitchen at Ben Poremba’s Elaia, Martinez was tapped to be executive chef of Cinder House, restaurateur Gerard Craft’s concept at the Four Seasons.

“I’ve always worked at restaurants ever since I was 16 years old, from hosting to waiting on tables. I figured out you could make more money at nicer places, so I started working at nicer places and saw food that made me say, ‘Whoa, I’ve never seen food like that before.’ High-end for us growing up was Outback Steakhouse.”

“I moved to Arizona and went to culinary school there. That’s where I met my mentor, William [Bradley]. I ate at his restaurant, Vu, and I’d never seen or tasted anything like it. The plates were beyond beautiful, and there were dishes like foie gras with ginger ice cream and pistachios – things I’d never even think of. I was so blown away, I thought, ‘I have to work here.’”

“Working at Addison in San Diego for William was probably the hardest three-and-a-half years of my life. It was like going to Harvard for cooking. It was stressful and hard, but it made me who I am today.”

“My wife’s from Florissant, so it was just a matter of time before we got here. Something fell through – a project I was working on – and she said, ‘Let’s just go.’ It was the first time I went anywhere without a job. Sometimes things work out the way they’re supposed to. We bought a house in Old Town Florissant in January.”

“The end game for us is to open something here in this area. I’m hoping in the next two years we can think about doing something. We’ve thrown around the idea of a wine bar, something more casual and simple. Maybe on a Friday or Saturday, we do an elaborate tasting menu or something.”

“People are doing some really cool stuff here. It’s hard being in those bigger cities now, and chefs and cooks are moving to places like St. Louis and Nashville because they can afford it. I got a job offer to go back to San Francisco, and I was like, ‘No way.’”

“I know Michael Gallina, and he was also an influence on me to come here. I worked [at Vicia] for two months when I first got here. He’s one of the most talented chefs in the city, and he’s staying true to himself. He’s not doing uber fine dining food but stuff that’s approachable, and he’s getting people into Bohlen Farms and Earthdance Farms and getting them to know where their food is coming from.”

“I’m super simple on days off. Beast [Butcher & Block] in The Grove is great. He sources well, and you can taste the quality in what he’s doing. I also like Louie. It’s just right. You can go there and get some prosciutto and some great wine and some bread, and that’s all you really need. We also love traveling and exploring. We do day trips quite often. Where we live, there are so many cool spots for hikes."

“To be in this industry, you have to be all in. You can tell the people who do it half-assed and those who love it. I think I was just born to do this.”