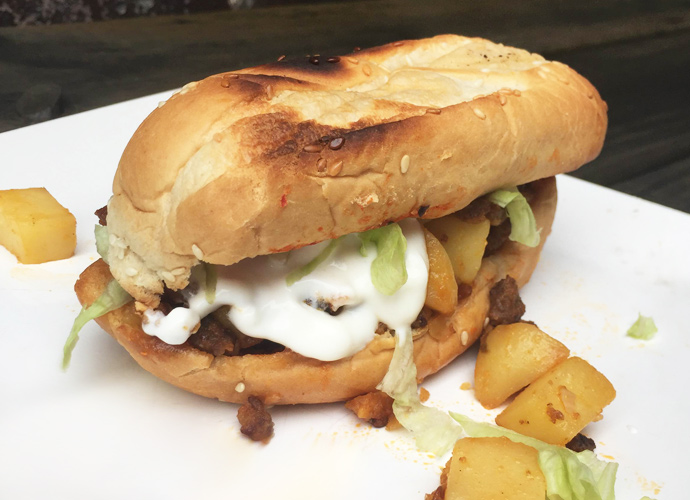 By the Book: “Eat Mexico” by Lesley Téllez 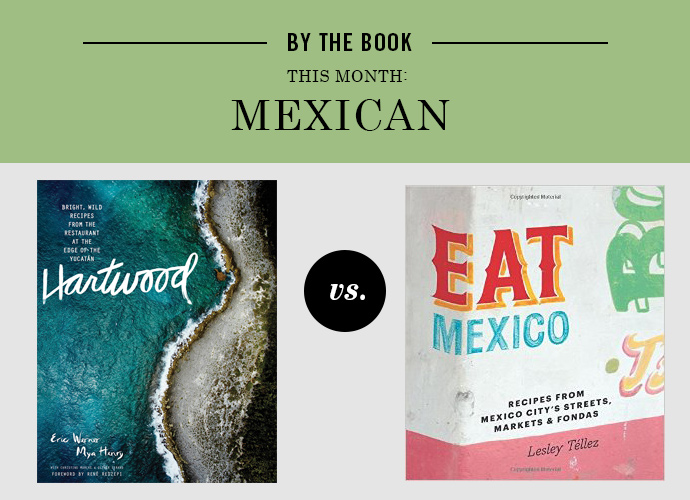 I chose to make pambazos, fried chorizo and potato sandwiches that were simple to assemble. Much of the work is done in advance (such as smoky-spicy guajillo sauce and a DIY crema sauce – though I opted to buy mine), and you need to plan in advance for this sandwich. I only let my rolls sit out one day to harden, and they were still far too soft and nearly fell apart when I attempted to toast them with the guajillo sauce. A few halves were sacrificed in the toasting process.

The filling calls for 8 ounces of chorizo to 1½ pounds of Yukon gold potatoes. Healthy resolutions or no, I’ll double the amount of chorizo next time – the mostly potato-filled rolls didn’t pack nearly enough of the rich chorizo spice as I’d hoped. Still, when slathered with rich crema and crunchy iceberg lettuce, this hefty sandwich made for a satisfying (slightly nap-inducing) lunch.

Skill level: Easy to intermediate. While some recipes are lengthy and call for hard-to-find ingredients, several only require patience and a few simple steps to achieve delicious flavors.
This book is for: Anyone who once wandered through the streets of Mexico City (or wanted to) and longs for a taste of that time.
Other recipes to try: Pollo rostizado en adobo (Roasted chicken in adobo), Bistec en salsa de chile pasilla (Steak in chile pasilla sauce) or Mole verde con pollo (Green mole with chicken)
The verdict: While the sandwiches were hearty and filling, they couldn’t compete against Hartwood’s elegance and complexity. Hartwood took on all comers to earn the top spot.

• Place the potatoes in a medium pot and cover them with 2 inches cold water. Bring to a boil and simmer on high until the potatoes are soft when pierced with a fork, 28 to 30 minutes. Let cool, then dice.
• Meanwhile, make the sauce: Hydrate the toasted chiles in water until the skins are soft, about 20 minutes. Transfer, with ½ cup of the chile water, into a blender jar with the onion, garlic and salt. Blend until mostly smooth, stopping occasionally to scrape down the sides of the blender jar. The sauce won’t be completely silky-smooth. That’s OK. Taste again and add more salt if desired.
• Heat the lard in a large skillet over medium heat. Add the onion and cook until translucent, about 3 minutes. Add the garlic, stirring until sizzling and aromatic, about 30 seconds, and then add the chorizo, breaking it apart into small crumbles. Raise the heat to medium-high and stir often until the sausage is cooked through, 8 to 10 minutes.
• Stir in the potato and salt to taste. Cooked until warmed through, cover and keep warm.
• Cut each roll in half and remove some of the inner crumb. Brush the outer crust of each roll with a light coating of the chile sauce. Working in batches, warm 2 teaspoons lard or canola oil in a cast-iron skillet over medium heat. When smoking, add one half of the bread, chile-sauce side down. Cook until dark-golden brown and crisp, about 3 minutes. Remove and add the other piece of bread, also chile-sauce side down. Repeat with the remaining rolls, draining between batches on a wire rack set on top of a baking sheet.
• To serve, spoon about ½ cup of the warm chorizo and potato mixture onto one bread half, then top with a layer of crema and fistful of lettuce. Cover with the other piece of bread. Repeat with the remaining pieces of bread and serve immediately, while the bread is still crunchy and hot.

• Two days before you’d like to eat the crema, warm the cream in a small saucepan over medium-low heat. You should only heat to take the chill off; be careful not to overheat. Stir in the yogurt and turn off the heat.
• Pour into a small clean jar and let cool. Place the lid loosely on top, without tightening and let sit for 24 hours in a warm place.
• Place the crema in the fridge for at least 6 hours to thicken. Stir and add salt to taste (I like just a pinch) before serving.

Reprinted with permission by Kyle Books