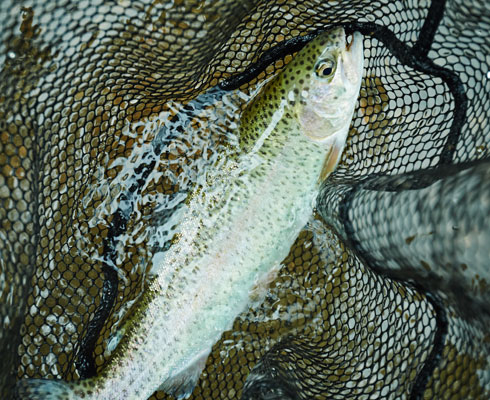 How To: Scale, Clean and Fillet a Trout

Scaling (Optional: Many people eat the skin without scaling.)
• Hold the whole trout by the tail and using the back of a fillet knife, scrape firmly from tail to head on both sides until all scales are removed.
• Rinse with cold water.

Cleaning and filleting
• With the trout’s belly facing you, gently insert the knife into the vent hole at the base of the tail and cut from tail to throat along its belly.
• To remove the head, firmly grip the trout’s midsection and sever the spine and body by making a perpendicular cut just below the gills.
• Remove entrails and rinse exposed meat with water. Scrape away the bloodline next to the spine with either your finger or a spoon.
• Lay the trout on its back with spine and ribs facing upwards. Gently insert fillet knife behind the ribs (in between ribs and meat) and carefully work the knife outward along the entire length of the ribs. Make sure to cut as close to the ribs as possible to salvage the most meat. Repeat on other side.*
• To remove the fillet from the connecting bone, insert the knife under the ribs with the blade facing inward and cut down and in toward the backbone. If done correctly, you should be able to hear the pin bones being cut.
• You should now be able to remove the whole frame of the trout and be left with a filleted trout free of guts and bones with the exception of a few remaining pin bones.**

*If done correctly, you should be able to see the blade the entire time.

**Run the fillet knife or your hands over fillet to detect remaining pin bones. To keep fillet in pristine condition, use needle-nose pliers to remove pin bones. This may not be necessary for smaller trout as the pin bones become soft and barely noticeable upon cooking.