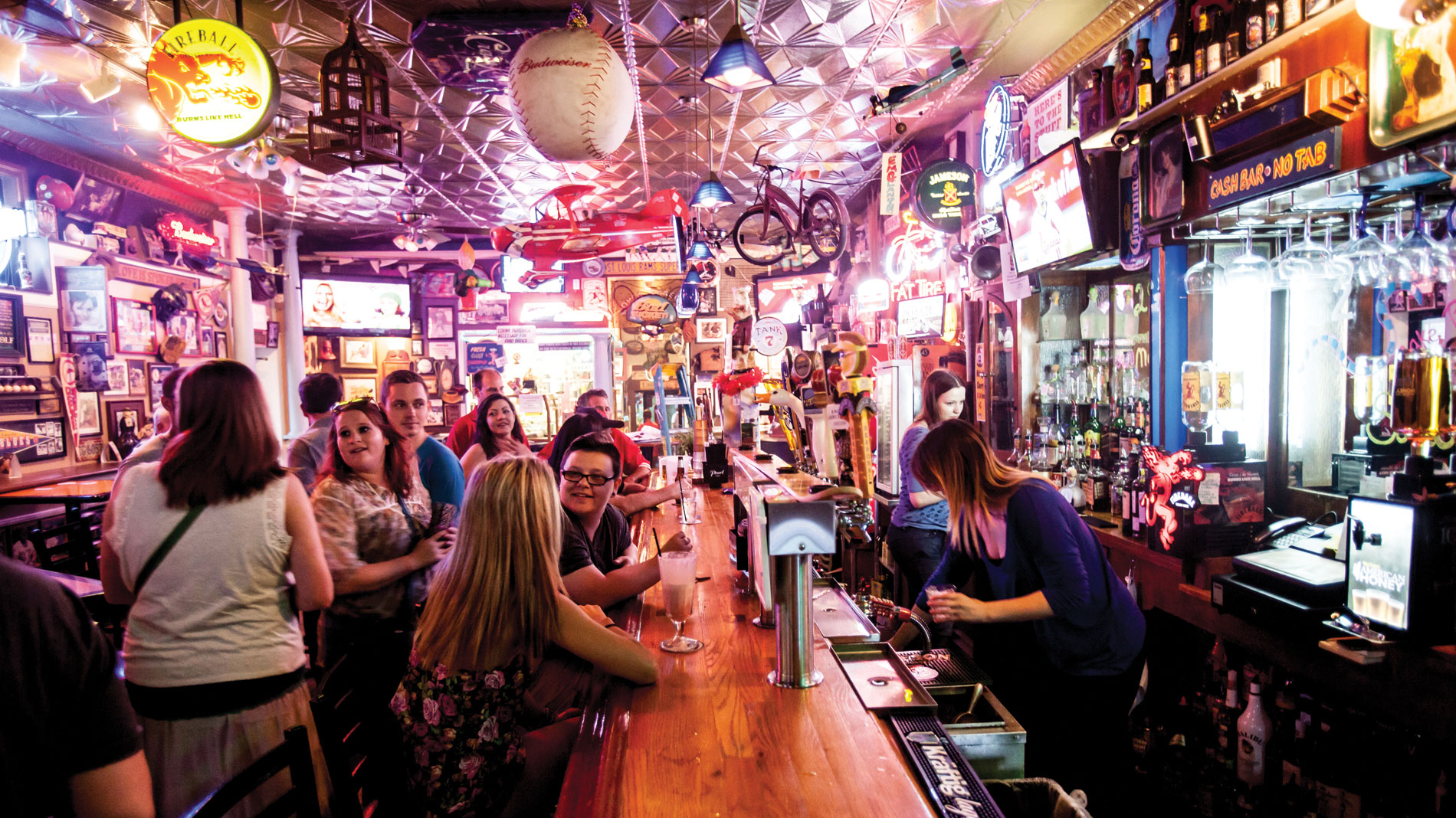 During its former life as a packed-to-the-gills, party-till-wee-hours jazz hole, Stella Blues was never a standout bar for quality drinks. People would flock there for the live music and any booze that made its way to the table was a bonus. The drinks still aren’t great, but since new owners shifted Stella’s focus from music to food three years ago, lines form in the small dive on Morgan Ford Road for some solid saloon eats.

The dark tin ceiling of this blue-collar haven hovers over a massive wood bar. Booze posters, sports memorabilia, neon signs and knickknacks cover the walls. A cramped open kitchen with counter service can be found deep in the cavern of beer signage and high-top tables, easy to spot by the sizable line of patrons ordering from menus on display. Lines can also form at the ATM, since both the bar and kitchen are cash-only. A rear door opens onto a good-sized patio, where statues of the ubiquitous Blues Brothers, Jake and Elwood, watch over smokers who decamp to iron patio tables. Every now and then, laughter and the click of pool balls erupt from a hidden pool room that exhibits even more glowing liquor signs and posters that didn’t fit in the main bar.

Stick with standard cocktails, which are perfectly potent and served up swiftly. Unfortunately, sugar water with a splash of liquor seems to be the theme of Stella’s drink menu, which features Hurricanes, Mudslides, strawberry margaritas and other blended concoctions. You know you’re in trouble when a bartender asks if you’d like your order topped with whipped cream. Boat drinks aren’t inherently bad, but watered-down fruit smoothies like the Stella Blues Crush or the Berry Blast are a waste of ice that don’t do the place or the well-meaning bar staff justice. The beer menu is more impressive, featuring popular Korean lagers like Hite Beer, along with standard domestics and local favorites like Civil Life, Schlafly and Urban Chestnut. In addition to rotating taps, Stella offers an excellent bottle selection.

The real fuel to Stella's fire is its scrappy little kitchen. Cooks plate up tasty fare in the form of wings, seared kebabs, fresh Gulf shrimp, grilled burgers and brats, house-made eggrolls and kimchi-bacon pizza. For $1, the pork kochi kebab is a savory little treat packed with enough spice to necessitate two Korean lagers at a time to wash it down. Similarly intense, but certainly not burn-ward level, were the substantial Hot Spicy Asian Chicken Wings, covered with just the right amount of sweet Asian sauce. And the food isn’t just good; it’s cheap – nearly all items on the menu ring in under the $3 mark.

To older patrons’ deep disappointment, live music at Stella has been put on a permanent hiatus. This hasn’t phased a new generation of super-casual 20- to 30-something Tower Grove bar-hoppers who line up at the ATM to get cash for a bucket of longnecks and a plate of chicken wings with a pile of napkins. Judging by the young crowd keeping the bartenders and chefs at this hidden, unpretentious culinary saloon busy, it won’t need to change its tune anytime soon.