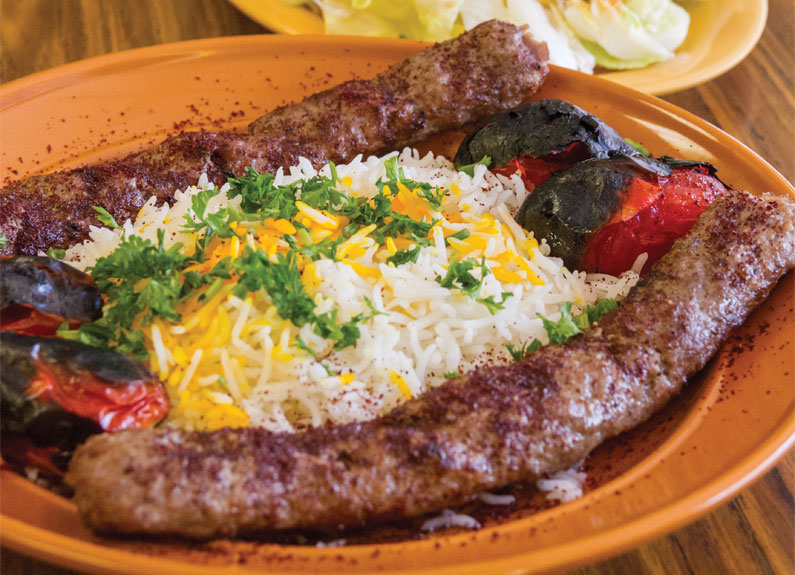 An Uncertain Start
My first five minutes at Royal Kebab provide a great summary of the overall experience. Arriving during a quiet lunch, there was no one to greet my party, so we seated ourselves; a flat-screen TV chatted away in a corner. Then, seemingly out of nowhere, Pearvz Gholina – waiter, chef and owner – appeared bearing complimentary bowls of chicken noodle soup and airy, sesame-topped white bread, made in-house every morning. After one taste of the hearty soup, with its unexpected and delicious tomato base, my initial misgivings about Royal Kebab faded away.

Stunning Starters (But Skip the Salad)
It’s possible to order appetizers and leave satisfied. The dolmas – grape leaves encasing velvety rice– were served hot (a first for me) with acidic but slightly sweet yogurt and oil. The sambosas – triangular meat pies of minced beef and onion – were again served sizzling hot in portions so generous I worried I had ordered a main dish by mistake.

By contrast, the salads were less satisfying. The Greek salad was diminished by flavorless olives and dressing more like ranch than the tzatziki I hoped for. The gyro salad, while generously portioned and attractively plated, was less succulent than other meat dishes.

Kebabs Fit for a Sultan
Kebabs are the obvious centerpiece of Royal Kebab’s offerings. The term “kebab” may bring to mind lamb roasting on a spit, but it can refer to any kind of meat grilled on a skewer. Here, the kebabs are served in pairs, with chicken, gyro, koobideh and barg kebabs offered in six different combinations. During lunch, I conversed with two Iranian brothers who declared the restaurant’s kebabs to be the best in St. Louis.

Turkish Specialties
For authenticity’s sake, I felt compelled to try the Turkish drink ayran. Yogurt-based, diluted with water and whisked, the chilled beverage sounds like the delicious Indian lassi, but had a lip-puckering amount of salt that threw me. The sweetened mango juice and other less exotic offerings might be more refreshing to those unaccustomed to the salty wash of ayran.

For dessert, I enjoyed freshly made zulbia (known elsewhere as jabeli) – nest-like lattices of deep-fried dough soaked in rose water syrup. I couldn’t manage a whole zulbia, but had no difficulty making space for baklava. The syrup-soaked delicacy is preceded by a strong aroma of rose water and offers the right balance of sweetness and nuttiness.

I was blown away by the barg – succulent and well-seasoned chunks of steak – and koobideh – beef (or lamb) with parsley and onion minced to a hamburger-like consistency. Listed as “barg and koodibeh”, this combination is sometimes aptly called soltani: the sultan’s meal. All kebabs are accompanied by chelo rice – boiled and pan-fried rice with an unusual, delicate texture – enlivened by saffron and sumac and topped with fat wedges of grilled tomatoes.

So-So Service
On my first visit, the gracious Gholina was alone in the restaurant, which caused long waits and poor communication impeded by limited English. My second visit fell on my server’s first day, and she was learning the menu on the fly. By my next visit, I imagine some of these service issues will be ironed out. But, if Royal Kebab is to grow a following of non-Turkish-speaking customers, it would do well to focus on hiring and training servers.

The Takeaway
For inexpensive, authentic Middle Eastern food, Royal Kebab is hard to beat. Though the service might test your patience, the food will win you over. This is the kind of place for which the phrase “diamond in the rough” was invented.