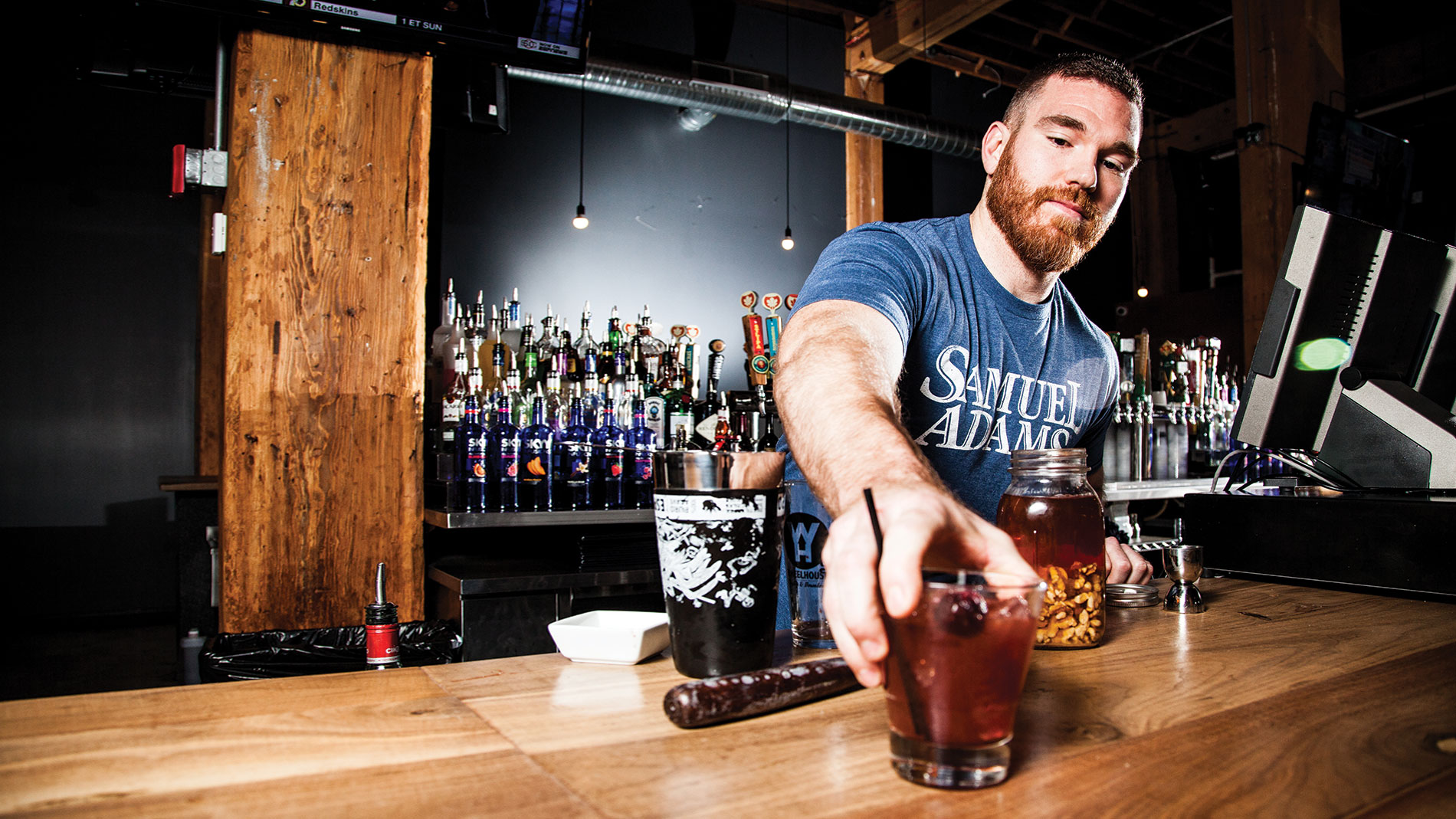 stephen savage, co-owner of the wheelhouse photo by jonathan gayman

Review: The Wheelhouse in St. Louis

If you’re looking to recline in front of flat-screen TVs and blow the froth off a few beers, game days at The Wheelhouse are hard to beat. And while the sports bar’s original location in Clayton is not without its charm, the real party is downtown. Late at night, The Wheelhouse’s new location on Spruce Street transforms into a bumping party machine fueled by sound and flavor. It’s massive. It’s loud. It’s engulfed with booze and people. It’s the kind of 3 a.m. joint downtown has needed for years.

Although The Wheelhouse occupies 10,000 square feet in the Cupples 8 building two blocks west of Busch Stadium, signage is minimal – you could easily buzz by the place and miss it. Neon beer signs and kitschy knickknacks or sports memorabilia are absent in favor of natural wood, exposed brick and slick metal. The understated warehouse is dominated by the enormous rectangular main bar in the center. An amply spaced mezzanine with built-in metal benches sits above the kitchen and overlooks the main floor, and there’s a smaller bar and game space (complete with shuffleboard and skee-ball) tucked in back. Patrons can sit in tall wooden booths with leather cushioning or one of several high-top tables.

At around 11 p.m. on a Saturday, I’m bumped off my barstool – not by some rowdy barfly but by the bartender, who has dragged away the stools to make extra space for the late-night crowd. I order another round and the lights dim. The music accelerates from muted alternative rock to Top 40 and ’80s/’90s remixes. The DJ keeps at it until the early morning, the crowd dancing and overwhelming both the front and back bars. Seemingly every space in The Wheelhouse, from the mezzanine to the outdoor benches, is filled to capacity with smartly dressed 20- and 30-somethings who have no intention of turning in.

The next morning, patrons slowly file in to catch Sunday football and dip into the $5 bloody mary bar or $10 bottomless mimosas. While the bloody marys are spicy and satisfyingly doused with vodka, The Wheelhouse’s signature drinks, which include a smattering of margaritas, mojitos and other supposedly “crafted” cocktails, were underwhelming. The worst offender might have been the Summer Spritzer, a tangy white wine-, vodka- and pineapple-soaked mess that went down like cheap perfume. However, whiskey and bourbon lovers are in good hands with the bartenders, who deftly mix the single-barrel and reserve options into excellent Manhattans and Old-Fashioneds. The bar is stocked with around 30 draft beers, dominated by big name favorites (Shock Top and Guinness), but also a handful of local brews (O’Fallon Wheach and four Urban Chestnut taps).

If the booze occasionally falls short, the food at The Wheelhouse scores some touchdowns. The kitchen successfully elevates bar and comfort food staples like mac-n-cheese, seasoned with smoked jalapeno or dressed up five other ways, including Creole (shrimp, Andouille sausage and Frito crumbs) and lobster and goat cheese. The appetizers here are the real winners; best among them is the shrimp and chorizo quesadilla, packed with thick mozzarella and accompanied by a bacon-flavored avocado aioli. While the sauce was rich and delightful, it was nothing compared to the roasted garlic dipping sauce that comes with the mac-n-cheese fritters, which are lightly breaded and swim in smoky jalapeno cheese. These kind of intelligently indulgent dishes are served in large portions and with more-than-reasonable price tags.

The Wheelhouse is wisely cashing in as a homegrown, non-corporate, non-touristy food and beer destination. Indulge your inner night owl here – but remember not to sleep through game day.