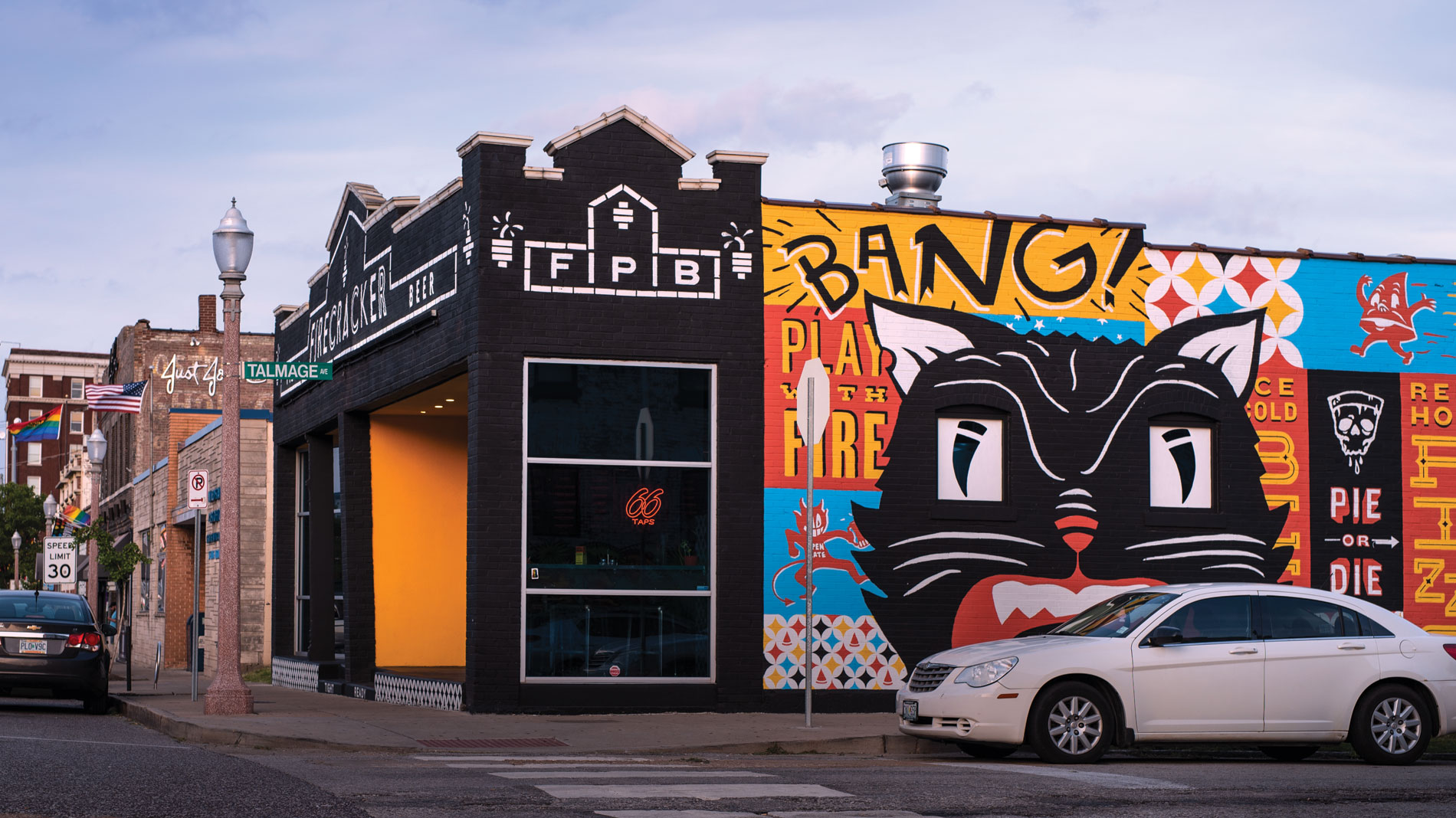 firecracker pizza & beer in the grove photo by david kovaluk

Starting with the exterior mural of a fierce black cat, Firecracker Pizza & Beer isn’t afraid to show off its explosive personality. The famous photo of Johnny Cash flipping the bird, glassware that says “F*ck Yeah!” and punk-inspired merch add a fun dose of irreverence to the urban-modern interior. It’s slick, as if poised for franchising, but not overly so – a worthy sister bar to Atomic Cowboy, owner Chip Schloss’ other establishment, across the street.

The space is roomy enough to accommodate a late-night crowd, but still intimate enough to encourage lingering, aided by energetic tunes that should kick up nostalgia for anyone who grew up in the ’90s and early 2000s. Patrons can also browse through a crate of records supplied by Music Record Shop – if you buy something, Firecracker will spin it for you.

If you’re wondering if Firecracker is more obsessed with pints or pies, the answer is both. The bar features 66 taps, including a diversity of styles from lagers to IPAs, stouts and sours. All of the bartenders are cicerones (sommeliers for beer) or are pursuing certification, and will happily provide guidance or pour samples to help you navigate the wealth of options.

The beer mania carries over into the signature cocktails, which use ingredients like spent-grain syrup and reductions made from local craft beers. The Munich Sour is a take on a whiskey sour featuring bourbon, lemon and bitters. Spent-grain syrup adds a subtle malty flavor while aquafaba, a thickening agent made from the liquid garbanzo beans soak in, adds a smooth counterbalance to the citrus pucker.

Also of note was the Hopical Storm, a light and summery gin-based concoction that includes 4 Hands Incarnation IPA, ginger liqueur, citrus, bitters and spent-grain syrup. All the cocktails I tried avoided the common sin of oversweetening – these are drinks made for those who enjoy complexity and bitterness. In addition to beer and cocktails, a small selection of wine is available, also on tap.

In the words of one of its T-shirts, Firecracker is a “Pie or Die” place. The rectangular pizzas come out quickly on metal trays. The crispy, chewy dough includes the special addition of malt extract and is lightly brushed with a chili oil before baking. Unique toppings include pastrami, sauerkraut, roasted eggplant and a cucumber-carrot slaw, and nearly everything is made in house.

Doug Weerts, formerly of Pi Pizzeria, created an assortment of signature pizzas that befits Firecracker’s name with familiar combinations revved up. The Jalapeno Bidness, for example, isn’t your average pineapple and ham pie. This version has spicy chorizo, pineapple relish and jalapeno for a spicy-sweet combination that makes it nearly impossible to say no to just one more slice.

The Shiva’s Revenge is basically an Indian samosa pizza, topped with curry hummus, eggplant, roasted potato and cauliflower with mint and tamarind chutneys. All the ones I tried had the proper pizza ratio dialed in – enough toppings to get a little of everything in each bite, but not so much that it was a hazard to eat. If you’re an extreme heat-seeker, any pizza can be doctored up with a visit to Firecracker’s hot sauce bar.

Stephanie Zeilenga is a critic and contributing writer for Sauce Magazine.