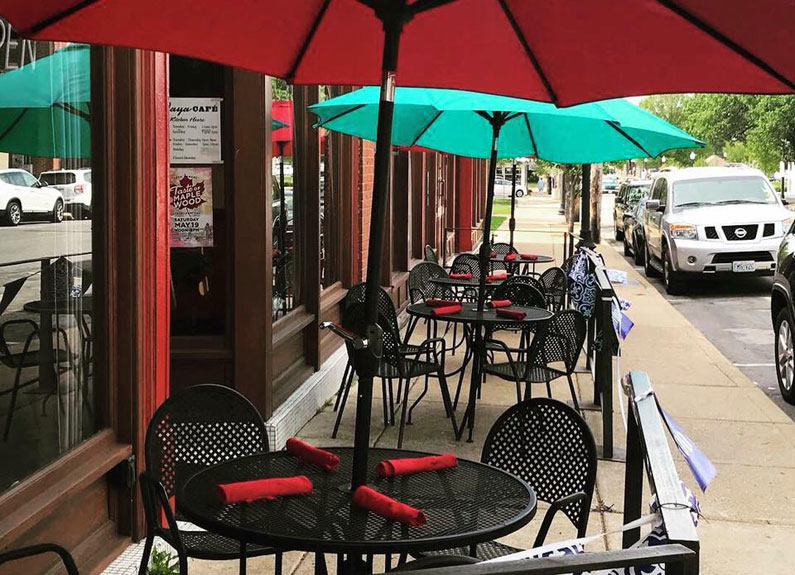 Once upon a time, before the Central West End became as popular as it is today, El Maya was a little Latino restaurant just off the corner of Laclede and Euclid Avenues. Most of the menu was Mexican fare like enchiladas and tacos, but there also were items like paella – and clam dip. Amparo Link, who ran it, identified herself as a Mayan Indian from Honduras, and she sure knew how to cook. El Maya hung on at several Central West End locations for several years, but then disappeared.

Well, like a Phoenix rising from the ashes, the Maya Café now is operating in Maplewood – still with the paella and the clam dip – and is doing well enough that it is about to double its space by expanding next door.  Other expansion plans also are in the works.

As Maplewood grows, with Bobby's Creole, Penzey's Spice Shop and a second location for the St. Louis Brewery and Tap Room leading the influx, the Maya is a fine addition to the crowd. Its menu notes that it is 1 1/2 blocks south of Bobby's, and people traveling to the Loretto-Hilton Center for the Rep or Opera Theatre may have another spot for dinner along the way. Two visits provided dinners that ranged from satisfactory to excellent. There were a few soft spots, but the overall effect was good.

It's a storefront, with neat tables and chairs and a small but well-stocked bar, and the beautifully eccentric hand of the wondrous Bill Christman has etched an autograph in the decor. The orange-yellow walls are hung with a collection of objects that includes a sign for the Dimwit Bros. sign painters; a bow toward Christianity, Judaism and Islam; a strangely unattached scrub brush and even a decorated bowling pin that may have come from a flea market, a Shriners' motorcycle parade, or the nimble mind of Christman – or maybe all three.

Either margaritas or sangria are prerequisites to Mexican cuisine, and Maya scores high on both. I wrote about El Maya for the Post-Dispatch nearly 30 years ago (October, 1972) and had special praise for the sangria, which I described then as "icy cold, rich, not too sweet, (with) plenty of fruit."  Same description still holds. Today's margaritas have a puckery amount of lemon juice; the drink is smooth as silk and probably far more dangerous, but delicious.

Fresh warm taco chips come to the table with a glorious salsa that I find closer to pico de gallo because of the size of the dice. But no matter what you call it, the chopped onions, tomatoes and peppers were crisp and displayed the results of a generous hand with spicing, and riding on the tacos, they provided some lovely duets.

Clam dip remains as an appetizer, and it's pleasant. Minced clams, probably canned but of satisfying taste, are mixed into a base that seems like sour cream or yogurt, and it tastes good on the warm chips, but it's hardly what I would consistently order to begin a Latin meal.  Black bean soup, on the other hand, was brilliant. The beans had a wonderful consistency, and the soup was dark and rich, heightened with a nice addition of chorizo sausage and a fine amount of garlic. Some of the best black bean soup we've had.  Guacamole was tasty, but fell short in the texture. Flavor was fine, but the mashed avocado felt as if it had been run through a blender and not hand-mixed with a fork, the way the best guacamoles are made, with a texture that is lumpy and varied. There also seemed to be too much mayonnaise in the mix.

A handful of specials on a chalkboard are added to a menu that offers not quite a dozen items. Paella, the marvelous Spanish chicken-and-seafood stew, is listed as only being available on Saturdays, but it was a special on a weeknight we visited, and it was special. Perfectly spiced, with superior saffron rice, peas and fine chunks of chorizo, it had shrimp, crawfish, mussels and clams, cooked to just the proper moment. A superior version of a classic dish.

Fish tacos, not seen on a local menu since Flaco's Tacos soared like a comet – and all too briefly – in the local restaurant sky, involved halibut (the menu notes striped bass but the charming waitress made the necessary edits) and were excellent, especially with some of that salsa spooned onto the fish. The saffron rice that came alongside was a delight, with the rice perfectly cooked and the haunting flavor of saffron adding a final touch.

The chimichanga, a large, fried flour tortilla, topped with a mixture of chicken or ground beef with chorizo, also was a delight. Crisp but not greasy, the tortilla was light and flaky, and there were layers of tasty refried beans, cheese and lettuce and tomatoes. Messy, but very good.

Tacos are available hard or soft, flour or corn, with chicken or beef, and we sampled a variety or combinations. The beef is ground and not pulled, but it was nicely seasoned, and we slurped down a number of lovely tastes.

Enchiladas and flautas also are on the dinner menu, along with marinated brisket cooked in red wine, shrimp kebabs, brandied pork tenderloin and a filet stuffed with serrano ham and Manchego cheese. Side orders include the usual rice and beans, plus corn, sauteed mushrooms and Mayan olive salad. Refried beans are tasty, but too runny for my taste, which runs to a texture and thickness almost like mashed potatoes. Olive salad was just like the Italian olive salad from the Hill, salty black and green olives (no pits) marinated in olive oil and vinegar with slices of celery and onions. Very tangy, very good.

Desserts include a lovely sopapilla, with plenty of cinnamon and satisfactory vanilla ice cream on a crispy pastry, and a pineapple empanada that had barely enough fruit in a cream cheese filling. Sweet and tasty.

Service is crisp and solid, and when a meal comes with as many good memories as dinner at the Maya Café today, it has to be something special.